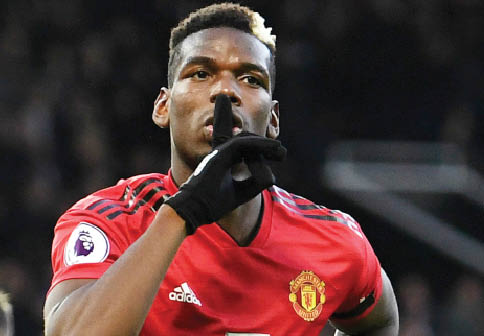 Paul Pogba struck another crucial blow for Manchester United in the Premier League title race with a stunning second-half strike to put his side back on top of the table with a 2-1 victory at Fulham on Wednesday.

The rejuvenated French midfielder arrowed home an unstoppable shot past Fulham keeper Alphonse Areola to settle the contest in the 65th minute at a windy Craven Cottage.

Fulham had actually taken the lead in the fifth minute when Ademola Lookman beat David de Gea with a clinical finish.

But United awoke from their early slumbers and were level after 21 minutes when Areola’s fumble allowed Edinson Cavani to convert from a close range.

United suffered a late scare when Aleksandar Mitrovic’s header deflected off Eric Bailly by going agonisingly wide but United hung on for an eighth away win of the season.

In doing so they equalled a club record of 17 away top-flight games without defeat, although more significantly it saw them move two points clear of Manchester City to lead the table at the halfway stage for the first time in eight years.

City had briefly topped the standings after beating Aston Villa 2-0 earlier on Wednesday. Leicester had knocked United off the top with a 2-0 win over Chelsea on Tuesday.

It was club record signing Pogba’s goal last week at Burnley that sent United to the top, and he again demonstrated that when he is fit and focussed he can be an unstoppable force.

“Fantastic goal by Paul and we had some other chances to finish the game but of course when it is just one goal and the players they put on it is going to be like heart in your mouth,” manager Ole Gunnar Solskjaer said of the player who has only sporadically shone for United since returning in 2016.

“Paul has really come on. He is fit, he can play in midfield and he can play wide. That is key with Paul, getting him match fit and running fit and he is now. He played very well.”

After City had claimed a sixth successive league win shortly before United kicked off alongside the River Thames, the pressure was on Solskjaer’s side to respond.

The early signs were worrying as Scott Parker’s Fulham were far quicker out of the traps.

They took the lead after a long spell of possession which ended with Andre Anguissa’s pass picking out Lookman to plant a shot past De Gea with United’s defence having switched off, awaiting an offside flag that never came.

The visitors soon clicked into gear though and moments after Bruno Fernandes had thumped a shot against the post he swung in a low cross that Areola flapped at and Cavani tapped home.

Areola redeemed himself with a great save from Fernandes and Harry Maguire also headed wide as United took charge.

Fulham enjoyed another bright spell early in the second half with Lookman presented with a great chance after good work by Ruben Loftus-Cheek, only to shoot straight at De Gea.

United looked the more likely winners though and after 65 minutes Pogba took matters into his own hands. Cutting in from the right he had only one thing on his mind and dispatched a left-foot shot that flew past the helpless Areola. (/NAN)