From Eugene Agha (Lagos) & Salim Umar Ibrahim (Kano) The scarcity of petrol is said to be worsening in Lagos, Abuja, Kano and across other… 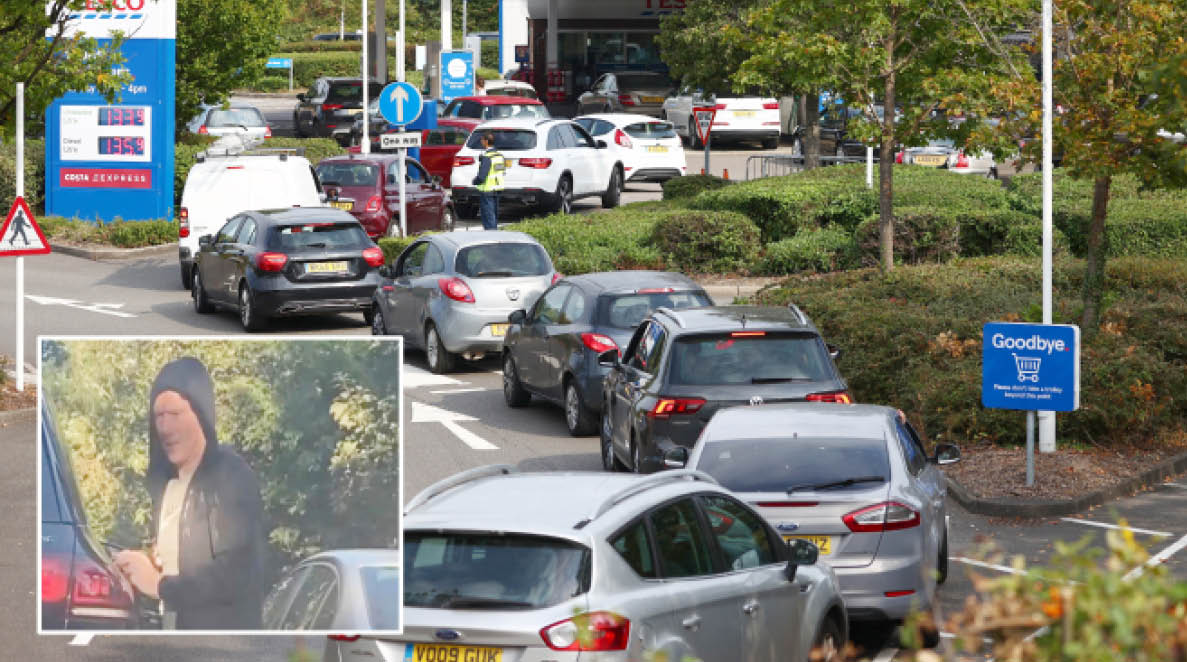 A line of vehicles queue to fill up at a Tesco petrol station in Camberley, west of London. Inset: Manchester United legend Paul Scholes spotted topping up on petrol on the side of the road amid the UK fuel crisis. Photo: AFP & Google

The scarcity of petrol is said to be worsening in Lagos, Abuja, Kano and across other states with marketers blaming an increase in the private depot price and a cut in supply at NNPC depots.

This is just as the Nigerian Midstream and Downstream Petroleum Regulatory Authority (NMDPRA) has directed depot owners to increase the supply of petrol to retail stations.

Why petrol is still scarce in Abuja after Lokoja flood – IPMAN

The scarcity in Abuja, the federal capital city, has continued for over two weeks with no sign of improvement; that of Lagos resurfaced this week and in Kano, it has been over a week when motorists observed the trend.

Daily Trust reports that the marketers currently blame the increase in depot prices for the fresh scarcity in Lagos, which is compounding the situation in Abuja after flooding cut off the Lokoja-Abuja highway, leaving petrol-laden trucks stranded or rerouting.

Speaking at the Oil Trading and Logistics (OTL) conference and exhibition in Lagos, yesterday, the National Operations Controller of the Independent Petroleum Marketers Association of Nigeria (IPMAN), Mr Mike Osatuyi, blamed the scarcity on unsteady supply, adding that it has caused depot prices to rise from N165 per litre to N177 and N178 in Apapa and its environs.

“The marketers will only sell what they buy. If the price of petrol increases, we add our transportation costs and other charges to the selling price,” Osatuyi said.

He urged NNPC and NMDPRA to increase supplies nationwide.

In Kano, motorists groaned over the cost of fuel which has skyrocketed to N250 per litre across available filling stations open for service.

Daily Trust observed that the current price of petrol in Kano away from the official rate which the NNPC stations and few others are selling at, the most common price started from N245 to N250 per litre.

Shuaibu Adamu, a motorist, lamented on how the filling stations value black market operators more than others who just want some few litres.

“Honestly, what is happening around these filling stations is not is not good. They value those who deal in black markets more than the ones who just want to fill their tanks and move on. These black marketers give bribes. So, they see it as an alternate means of getting extra cash out of what they are entitled for – their salaries.”

Musa Gambo said, “I have been in the queue since 5:30am, this is 9:17am that I get to enter the filling station. We are talking about NNPC who sell at the normal rate and you can see the long queue for yourself.

“All this is happening because of the outrageous rate other filling stations are selling at. 245, 250 honestly is not a good one.”

While others blame the service providers, Iliyasu Mustapha accused the stakeholders of pure wickedness aimed at extorting innocent people.

He said, “I don’t believe there is no fuel in this state. They are just managing the situation and doing what they like. Go to the NNPC depot, everyday, trucks are moving in and out. These marketers are just taking advantage of the slightest opportunity to extort and cheat people. That’s just it.”

Nura Malo, who deals in black marketing for over 15 years said: “We are helping people at least, most of the time, we spent nights without sleep trying to get the product and where do we take it to? Of course, to the streets where people can get it fast.”

He had recently said the bad roads were part of the difficulty in fuel supply in the north.

However, the Chief Executive Officer, NMDPRA, Engr Farouk Ahmed, who spoke at the OTL conference in Lagos, insisted that the nation has enough fuel in stock.

He said, “l spoke with the Major Oil Marketers Association of Nigeria (MOMAN) executive secretary this morning and he told me they have sufficient stock.

“I have directed them to start evacuating the product immediately to filling stations. NNPC has also confirmed sufficiency and they have commenced evacuation.

“From now till tomorrow, the situation will be back to normal. I don’t know what is happening, but we are on top of the situation,” assured Ahmed, as he urged consumers to avoid panic buying.