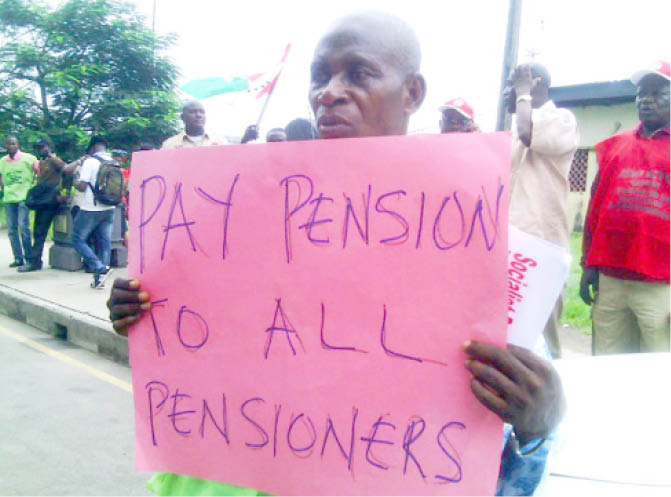 A group known as Concerned/Aggrieved Pensioners in Benue State on Wednesday protested on the streets of Makurdi, the Benue State capital over alleged 74 months of unpaid entitlements.

Their chairman, Akosu Ioream, who led the protesters to the state’s house of assembly to meet with the speaker, Titus Uba, said they were being owed between 37 and 74 months of pension arrears at the state and local governments, respectively, while the backlog of gratuity had become a forgotten issue.

“As a result of non-payment of pension and gratuity, pensioners are dying on a daily basis as most of them are on a special diet and drugs but could not afford even a maintenance ration or drugs. This has caused untold hardship to pensioners including the inability to afford decent food.

“Because of hardship occasioned by nonpayment of pension and gratuity, we have lost our wives to ‘okada boys’ since we are no longer economically viable to cater for them,” Ioream said.

The protesters added that the state government had not harmonised the pensions and gratuity payable to retirees as some of them are still being paid N800 per month.

Responding, the deputy clerk, Oliver Aguda, who received the protesters, told them that the speaker who is the Peoples’ Democratic Party (PDP) governorship flag bearer had travelled out of town.

Also on Wednesday in Niger State, retirees for the third time in one month stormed the Government House in Minna to protest over the non-payment of their gratuity for the past eight years.

The Chairman, Niger State Retirees Pressure Group, Steven Daniel Zitta, told our correspondent that many of pensioners had died without their retirement benefits.

He said many of them developed partial stroke and eventually died out of frustration due to the trauma they had gone through while pursuing the payment of their benefits in the last eight years.

They said during each of their protests to Government House, the governor was said to have always travelled.

They accused the Niger State Chapter of the Nigeria Union of Pensioners of not protecting the interest of its members.

Addressing the protesters, the deputy governor, Ahmed Mohammed Ketso, said the government would look into their complaints, and fixed Thursday to interface with the protesters.