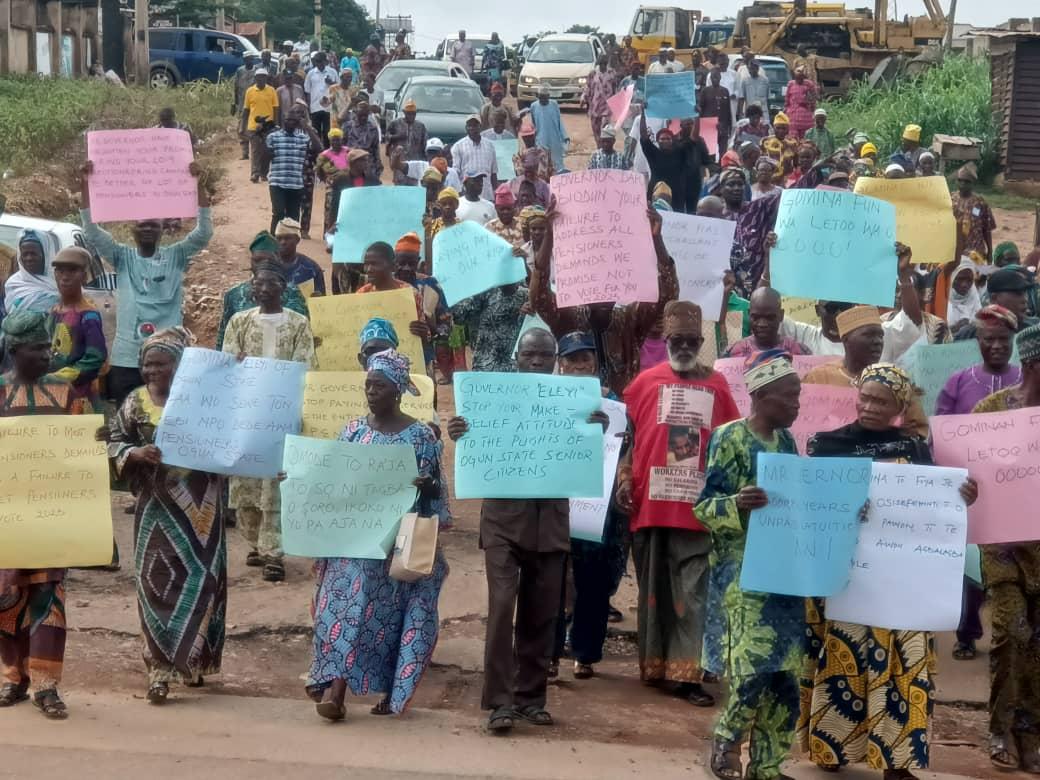 Tue, 27 Sep 2022 14:29:41 WAT
Members of the Nigeria Union of Pensioners (NUP) in Ogun State on Tuesday protested the non-payment of their 12 years’ gratuities estimated at N68bn by the government.
They described the Governor Dapo Abiodun-led administration as the “enemy of pensioners” over the failure to fulfil its promises of prompt payment of their gratuities and other entitlements.
Displaying placards with various inscriptions, the protesters marched from the secretariat in the Leme area of Abeokuta, the state capital to the governor’s office in Oke-Mosan, chanting anti-government songs to register their grievances.
Some of the inscriptions on their placards read: “Governor Dapo Abiodun, you should know that pensioners are not slaves, hence they deserve better treatment from the government”; Mr Governor why did you disobey your father’s instructions to cater for pensioners?”; “Governor Dapo Abiodun stop paying lip service to the rights of the senior citizens in the state”; “Mr Governor address unpaid arrears of 12 years gratuities now”! and “Mr Governor has been nonchalant to the plights of Ogun pensioners”.
Speaking with newsmen, the chairman of NUP, Waheed Oloyede accused the governor of deliberately punishing pensioners by denying them of their entitlements.
He lamented the non-implementation of a 33.4 per cent increment in their pension, saying Abiodun has impoverished pensioners by withholding their gratuities.
He said the meagre N5,000 minimum pension being paid to some of their members “is grossly inadequate to meet with the present economic demands”.
Oloyede also lamented what he called the “acute lateness” in the payment of their monthly pensions, saying this has caused “untold financial hardship to the senior citizens who spend a huge amount of money on various old age ailments.”
He said, “This protest is meant to appeal to all well-meaning citizens of Ogun State, to prevail on Governor Dapo Abiodun to redeem all his promises on the basis of equity, justice and fairness to the ageing pensioners who now face varying health and psycho-social ageing challenges.
“He (Abiodun) should be reminded that our entitlements are only enjoyable in the land of the living but not in the grave. He should please help to reduce the sharp incidences of daily occurrences of deaths of pensioners in recent times.”
Addressing the protesters, the Secretary to the State Government (SSG), Tokunbo Talabi assured the pensioners of a quick response to their demands.
He said, “We are trying our best to make sure that all your demands are urgently attended to. You have a legitimate right to make these demands, but we are currently being faced with limited resources.”