Pensioners on Monday cheered the conviction of the former Chairman of the defunct Pension Reform Task Team (PRTT), Abdulrasheed Maina.... 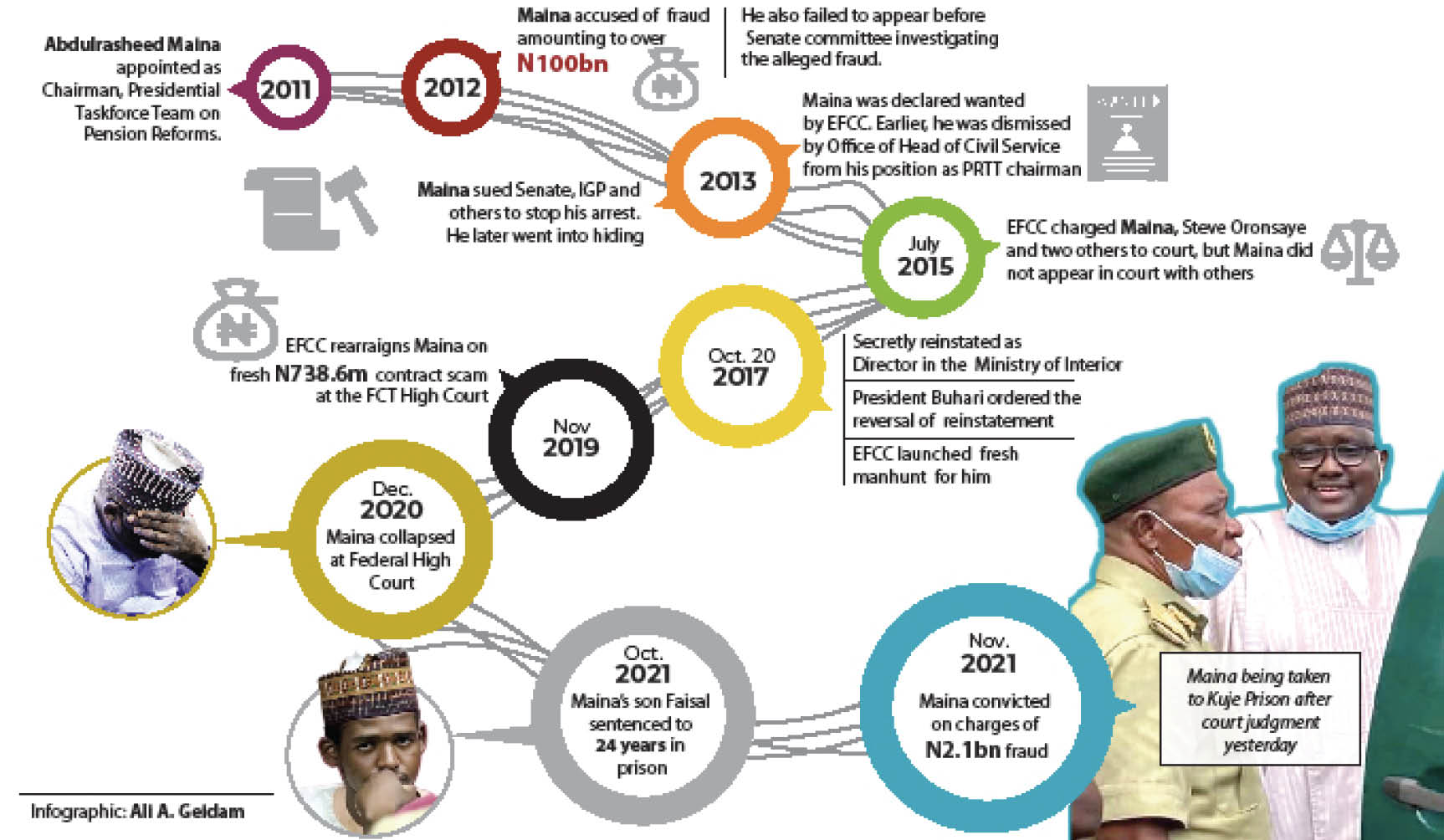 Pensioners on Monday cheered the conviction of the former Chairman of the defunct Pension Reform Task Team (PRTT), Abdulrasheed Maina.

While thanking the judiciary for slamming the right punishment on Maina, they called for speedy dispensation of justice to discourage those interested in short-changing the weak in the society.

Justice Okon Abang of the Federal High Court, Abuja convicted and sentenced Maina to 61 years in prison for offences bordering on money laundering.

This means he will be in prison for eigh years.

The judge, in passing the sentence, said the Economic and Financial Crimes Commission (EFCC) had proven the essential ingredients of the charges preferred against Maina beyond reasonable doubt.

He ordered Maina and the second defendant, Common Input Property and Investment Ltd., to refund the sum of N2.409bn to the federal government.

All payments, according to the judge, should be done within 90 days.

Abang also ordered for forfeiture of Maina’s two houses said to be acquired with proceeds of the crime. They are situated in Jabi and Life Camp, Abuja. Two vehicles, including a bulletproof SUV and a BMW 5 series were also ordered to be sold and the proceeds forfeited to the federal government.

He said the judgment was intended to “Send a message to those who are in the act to have a rethink,” but added that he could not impose the maximum sentence of 14 years allowed for the offence in view of the plea by Maina and his lawyer.

Maina’s lawyer, Olusegun Jolaawo, SAN, told the court that his client was “obviously remorseful” as he begged the court to temper justice with mercy in passing its judgment.

He acknowledged that Maina had “Made some bad decisions for which the court has adjudged him guilty. But as a human being, he is not infallible and none of us is.

“For this, we urge you to give him a second chance by not bringing the full weight of the law down on him.”

The lawyer said Maina is the breadwinner of his large family and is battling serious illnesses.

Maina had jumped bail and fled to the Republic of Niger where he hid for some months last year.

While he was on the run, Justice Abang revoked the bail earlier granted him and put his surety, Senator Ali Ndume, behind bars for some days before releasing him on bail.

With the help of the arrest warrant issued by the judge, security agencies apprehended Maina in the Niger Republic and brought him back to court on December 4. He was immediately remanded in prison till the end of his trial.

Delivering the judgment, Justice Abang described the convict as “heartless” as he reflected on the import of the offence.

“In my view, it is pensioners’ funds the 1st defendant (Maina) stole and some of the pensioners died out of frustration,” he said.

According to him, the part of this case portrays the immoral decadence of the society we live in adding, “I think we need a national rebirth in this country.

“The 1st defendant treated the pensioners with levity; some of them have suffered and died.”

Abang said it was disheartening that Maina perpetrated the act which had ruined many homes in the country.

He noted that the EFCC witness who testified in the course of the case pointed out that Maina, whose salary as a civil servant was N256, 000, couldn’t have had such money running into billions in his accounts even if he saved all his salaries in his 35 years in service, stating That “the money formed part of unlawful activities to which the 1st defendant reasonably ought to have known.”

He said the anti-corruption agency was able to establish that Maina opened two anonymous accounts in the United Bank of Africa (UBA) and five accounts in Fidelity Bank Plc to perpetrate his unlawful act.

He also said the EFCC was able to nail Maina, using his sister-in-law, who is a UBA staff; his blood sister, a civil servant and younger brother, who was a Fidelity Bank staff, among the prosecution witnesses.

The judge said that Maina could not defend himself on the evidence given by the fifth prosecution witness that he (Maina) gave him the witness about $1.4 million in cash to purchase a property valued at N150 million located at Life Camp, Abuja.

The judge said it was disheartening that Maina, through the assistance of UBA and Fidelity Bank Plc, deprived the pensioners, who gave their youthful age to serve the country, their legitimate right.

“Meanwhile, the convict, far away in Dubai, was buying choice property, living in affluence, driving bulletproof cars far beyond his legitimate earnings.”

The judge noted that the UBA and Fidelity Bank Plc would have been joined along with the defendants in the case, “Though the complainant is at liberty to choose who to join in their suit. Now the convict is alone and the banks have benefitted from the illegal transaction,” he said.

The judge added that it was not sufficient that the banks only provided the witnesses, through which Maina was convicted.

Abang said the two banks’ operating licences ought to have been withdrawn in accordance with the law.

“If the banks had done a due diligence, the 1st defendant (Maina) would not have used those accounts he opened as a conduit pipe,” he said.

Reacting to Maina’s conviction yesterday in a telephone interview with one of our correspondents, the Nigeria Union of Pensioners (NUP) described the conviction as a “welcome development”.

The senior citizens, who spoke through the Head of Information Unit of the union, Bunmi Ogunkolade, appealed to judges handling various corruption cases especially the ones related to pension, to hasten judgement delivery, saying the same treatment meted out on Maina would serve as a deterrent.

Ogunkolade said, “The law should take its course. NUP has no reservation about it or whatever that to say any criminal involved in pension fraud by stealing people’s life, should have a taste of law.

“However, we expected the judgment, the will of justice to move a bit faster. When someone steals money in Ghana, Korea, South Africa or Brazil, three months, six months and judgment is delivered. But in Nigeria, after 10 years, we are still on it. People might have even forgotten.

“That is the only thing the government can please do for us so that in our lifetime, pensioners could see the punishment meted out on the people that stole their sweat that made life difficult for them, not when you now allow the will of justice to go for 10 to 15 years.”

“So, it is a welcome development, and it will serve as a deterrent for others. Justice should take its course.”