PDP crisis: Wike, Makinde, Ortom back to London for another round of meeting

Following the inability of Alhaji Atiku Abubakar, Presidential candidate of the Peoples Democratic Party (PDP), to reign in the warring factions in the party, the… 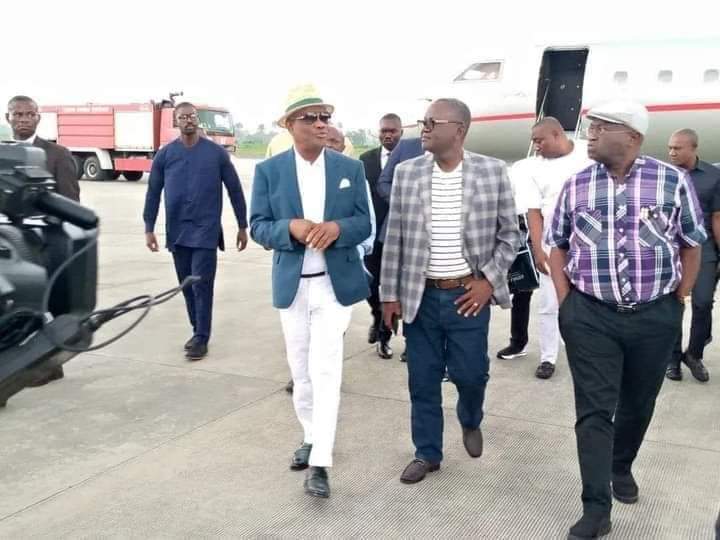 Following the inability of Alhaji Atiku Abubakar, Presidential candidate of the Peoples Democratic Party (PDP), to reign in the warring factions in the party, the Rivers Governor Nyesom Wike and some of his allies have again returned to London for another round of meetings.

Atiku met with Wike and some of his allies in London two weeks ago. The Presidential Candidate had reportedly spoken with the governors on the need for the PDP to go into next year’s election united.

However, after that Wike and Senator Iyioricha Ayu, National Chairman of the party, renewed hostility by exchanging words in the media.

After the heated exchange, Wike and his loyalists, including Benue State Governor Samuel Ortom, headed for London.

Daily Trust reliably gathered that the London meeting is meant for strategy ahead of the National Executive Committee (NEC) and the National Working Committee (NWC) meetings that will hold before the establishment of the PDP campaign council later in the week.

The London meeting Daily Trust also understands has to do with whether the Wike Camp should accept a role in the council or not.

A source told Daily Trust that after the meeting with the Presidential candidate Atiku Abubakar in London, both parties were hopeful of a truce.

“The Wike Camp were hopeful that Atiku will prevail on the National Chairman Ayu to give up his position. But the event of the last few days might have changed the dynamics of the whole crisis. It is like both parties are not letting go. I believe they want to re-strategise and decide what their level of participation will be in the campaign council,” the source said.

Last week, Wike had promised that “something will soon happen” in the PDP, though he did not mention what exactly that is.

The Rivers governor had also said he would assist the National Chairman of the party to make the PDP lose the 2023 elections since according to him Ayu himself did not want the party to win.

This was after he accused the Chairman of the party of refusing to step down because of the N14 billion in the account of the party.

The main party organs are expected to meet this week to endorse the composition of the campaign council.

The organs will also look at the crisis in the party and see whether they can still salvage the situation.

Meanwhile, the Chief Press Secretary to the Benue State Governor Nathaniel Ikyur, told Daily Trust that his principal has traveled out of the country, but on a two-week vacation.

He said :”Yes the Governor has traveled and he traveled with the Rivers State Governor Nyesom Wike and he is expected back in the country on the 16th of this month.”