The Peoples Democratic Party (PDP), Tuesday, threw its weight behind the 2023 election debate conceived by the Media Trust Limited, owners of the Daily Trust… 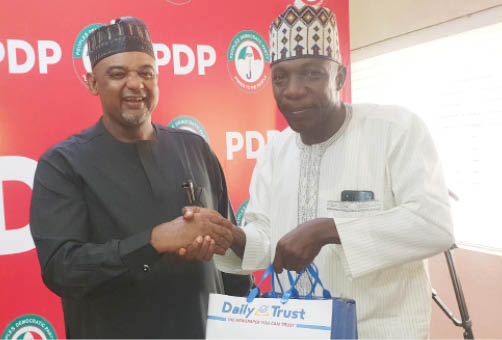 The Peoples Democratic Party (PDP), Tuesday, threw its weight behind the 2023 election debate conceived by the Media Trust Limited, owners of the Daily Trust Newspapers and Trust TV to enhance voter education, mobilisation and participation in the 2023 elections.

Dubbed Media Trust Nigeria Election Debate 2023, the media outfit is organising a series of debates for governorship and presidential candidates ahead of the 2023 general elections.

The debates aim to create a platform for candidates and their parties to connect directly with voters and to discuss their policies and manifestos with the people.

PDP National Chairman, Senator Iyorchia Ayu, commended the media outfit for the initiative, saying it would go a long way to strengthen the country’s democracy.

He spoke when he received a delegation of the company on a courtesy visit in his office in Abuja.

The delegation was led by Media Trust’s Editorial Board Chairman, Dr Suleiman Suleiman.

Ayu, who was represented by the Deputy National Chairman of the party (North), Ambassador Umar Damagum, said the party was ready to support the company to achieve its objectives.

He said there was the need for more interface with the media in the country as the 2023 elections draw near, adding that the idea of the debate is a very important one.

“The idea of going into other languages like Hausa is also a welcome development,” he said.

Damagum called on media houses to listen to the opposition parties more as the mouthpiece of the populace.

Earlier, Dr Suleiman said the debate was necessary to address the growing voter apathy in the country.

“We hope that it will make people to come out and vote for the candidate of their choice.

“We want to give voters the opportunity to see the candidates. We have seen many organizations, parties like yours and other interest groups, but with parties, what we need is collaboration,” he said.