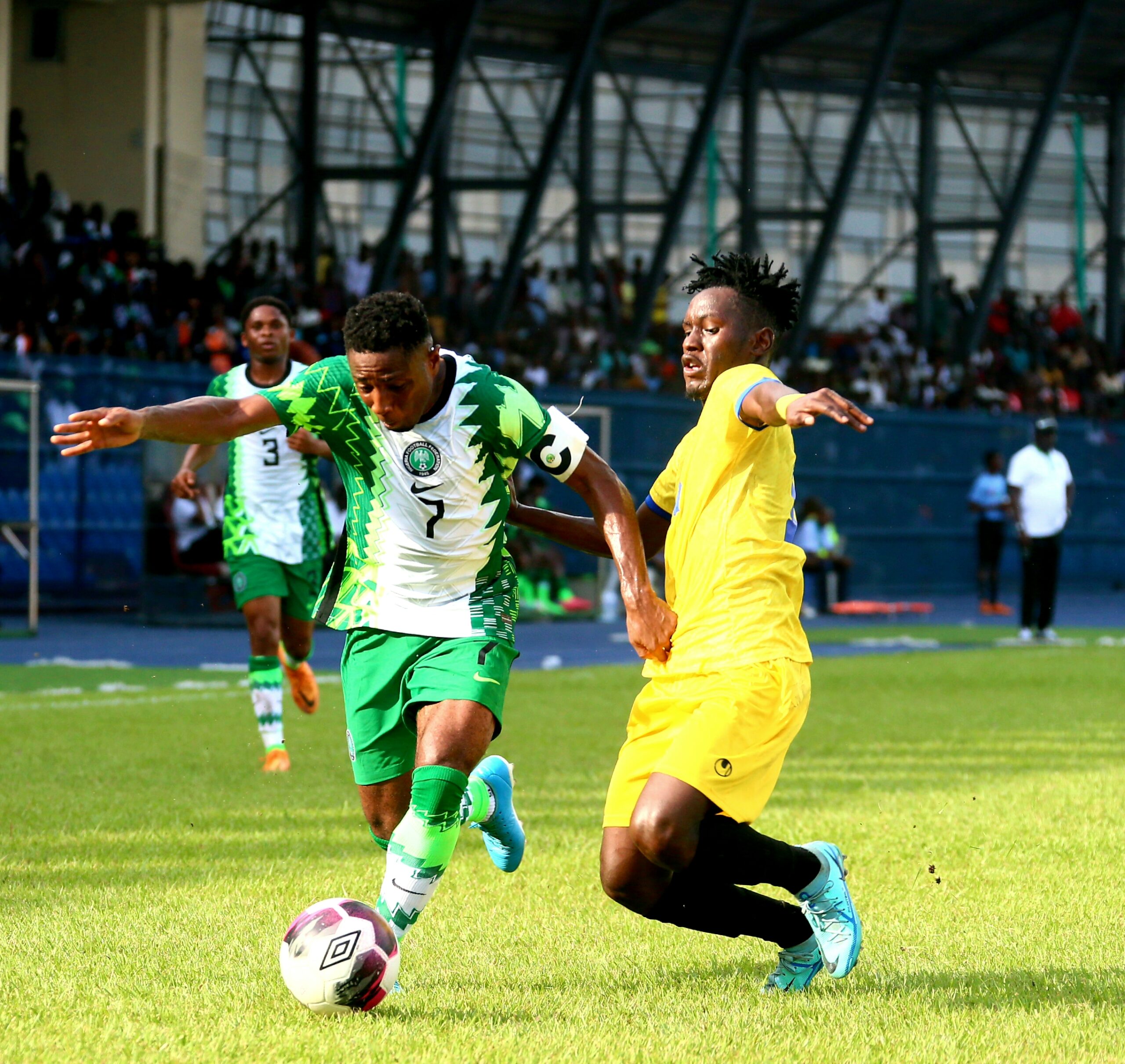 Nigeria reached the final round of the 2023 Africa U23 Cup of Nations on Saturday after Timilehin Ogunniyi and Success Makanjuola scored in the second leg at the Lekan Salami Stadium, Ibadan to condemn visitors Tanzania to a two-goal defeat and 1-3 loss on aggregate.

Some hours before the game, Governor Seyi Makinde of Oyo State and Chairman of the NFF Task Force on Youth Competitions, Alhaji Aminu Balele Kurfi, had buoyed the spirit of the team with redemptions of cash promises and further promises of windfall should they put the Junior Taifa Stars to the sword.

It was therefore no surprise when the Olympic Eagles started like a house on fire.

Success Makanjuola, Akanni Qudus, Timilehin Ogunniyi, Sunusi Ibrahim and the attack-minded defender Dominion Ohaka hassled and harassed the visitors’ rearguard to no end, but without finding the early breakthrough they so much desired.

However, Tanzania played a compact and economic game, and could have gone ahead as early as the 12th minute when Mundhir Abadalla unleashed from the edge of the box as Daniel Wotlai misjudged ball in flight. Nigeria’s first choice Nathaniel Nwosu was up to the task.

Three minutes later, Ohaka’s shot was too high from 20 yards, and Ogunniyi’s efforts screamed way off the mark in the 18th minute as Nigeria applied pressure.

Nwosu again came up big in the 28th minute to thwart Muhajiri Jaribi who let fly from just outside the left side of the box.

But Nigeria was not daunted and continued to impress in the presence of Governor Makinde and top officials of the Oyo State Government, sports minister Sunday Dare and NFF board members.

In the second period, Sunusi Ibrahim side-netted from a scissors kick and Ohaka’s thrust went away as Nigeria kept their feet on the pedal, but they could have been shocked in the 52nd minute when a defensive error allowed Edmund Godreu John sight of goal only for him to pull the ball too high.

Nigeria continued to knock on the door and it finally opened in the 62nd minute, when Ogunniyi slammed into the net from a free-kick 23 yards out.

Eight minutes later, the Olympic Eagles were two goals up when the irrepressible Ogunniyi was hacked in the box, and Makanjuola found the net from the spot.

At the end, sports minister praised the team for a job well done but charged them to develop the mentality to convert most of the opportunities they create during play.

“I congratulate you for a job well done and I am happy that you have reached the final round of the qualifiers for the U23 AFCON. But I am challenging you to learn to convert most of your chances in open play. You only need to work hard and stay focused.”

The Olympic Eagles will play the winner of the fixture between Uganda and Guinea in the final round of the qualifiers in March 2023.