As the people of Osun elect a new governor for the next four years, there is a heavy deployment of security operatives in major towns… 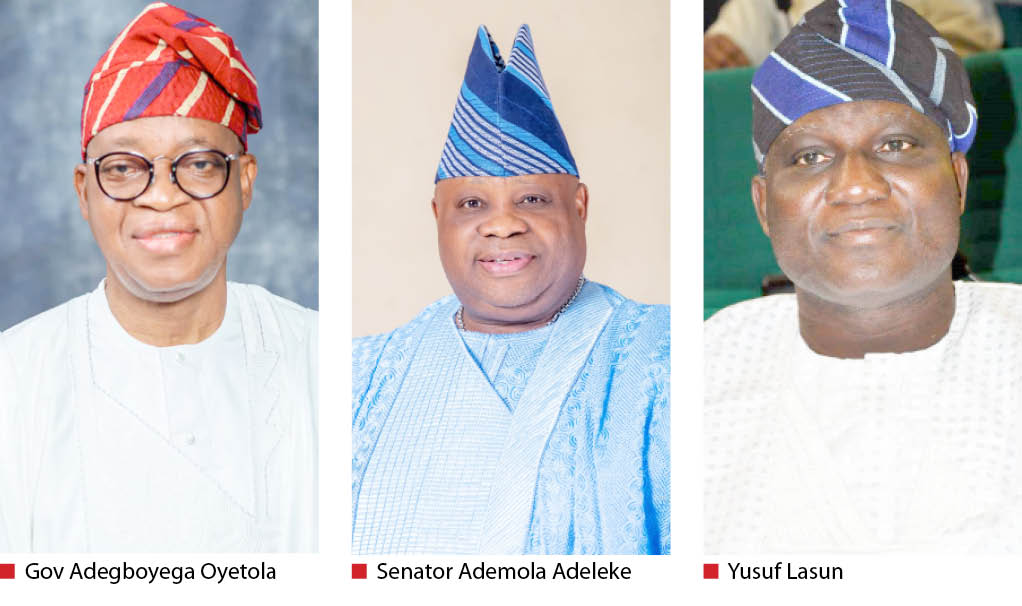 As the people of Osun elect a new governor for the next four years, there is a heavy deployment of security operatives in major towns of the state. Not less than 1,955,657 registered voters are expected to exercise their franchise across the 3,763 polling units. Meanwhile, residents have vowed to collect greedy politicians’ money and still vote for their candidates.

Soldiers, policemen and members of the Nigeria Security and Civil Defence Corps (NSCDC) were seen in strategic locations around the state capital and border towns.

The election, which will be contested by 15 political parties, is expected to be a straight duel between the incumbent governor, Gboyega Oyetola of the All Progressives Congress (APC) and Senator Ademola Adeleke of the Peoples Democratic Party (PDP).

Other candidates in the race are the former Deputy Speaker of the House of Representatives, Lasun Yusuf of the Labour Party, Goke Omigbodun of the Social Democratic Party (SDP) and Akin Ogunbiyi of Accord Party.

Meanwhile, residents who spoke with Daily Trust Saturday said their choice would not be influenced by money and other forms of inducement.

A test of performance and popularity

More voters are expected to participate in the election than the 2018 poll when 767,444 electorates out of the 1,668,524 registered voters exercised their franchise. The election recorded 45.99 per cent turnout.

In 2018, the Independent National Electoral Commission (INEC) declared Oyetola as winner, having polled 255,505 votes against Adeleke, who had 255,023 votes at the end of a supplementary election, which held in seven polling units across four local governments amidst allegations of harassment and other forms malpractice.

The INEC had scheduled the rerun after declaring the main election inconclusive, won by Adeleke with 353 votes after polling 254,698 against Oyetola’s 254,345. It stated that the margin of votes between Adeleke and Oyetola was less than the number of cancelled votes in seven polling units.

Today’s poll will offer an opportunity for Oyetola to banish any doubt about his victory four years ago or reinforce Adeleke’s claim that his mandate was stolen in 2018.

The two leading candidates have crisscrossed the 30 local government areas in the state, wooing the electorate with their plans if given the opportunity to lead the state of the Living Spring.

Oyetola, who had over 30 years of cognate experience in the private sector before venturing into politics as chief of staff to his predecessor, Rauf Aregbesola, is campaigning on the strength of his performance in the last three-and-a-half years, stressing that his re-election would help to consolidate his achievements.

The Iragbiji-born politician, who said he had not disappointed the people in delivering dividends of democracy, assured that he would do better if re-elected on Saturday.

“My decision to seek re-election is based on genuine intention to serve the good people of Osun, consolidate on the good works we have been doing, further entrench good governance and deliver more dividends of democracy to our people,” Oyetola said when he announced his re-election bid.

The state Commissioner for Information and Civic Orientation, Funke Egbemode, in an interview with Daily Trust Saturday, said the people of the state would reciprocate Oyetola’s performance at the poll by massively voting for him in order to consolidate the achievements of the administration. She predicted that Oyetola would win the poll by a wide margin.

Faulting the oppositions’ claim that the governor had few achievements to mention during the recent governorship debates in the state, she said a debate was guided by rules.

“Even if the governor had been given two hours without interruption from other candidates at the debate, it would still not be enough for him to itemise all his achievements because a debate is still a debate, and there are rules guiding a debate. He answered the questions that were asked of him. There was no time for him to go further on his achievements, that is why he has copies of his achievements for reference,” she said.

However, the popularity of Adeleke seems to be on the rise on a daily basis as evidenced by the crowd at all his political events in the state.

The former senator belongs to the Adeleke political dynasty; leveraging on the political structure and goodwill of his brother and former governor of the state, the late Senator Isiaka Adeleke, and the financial muscle of his billionaire brother, Dr Deji Adeleke, father of popular singer, David Adeleke (Davido).

The family is arguably one of the known families in Osun, especially in Ede, owing to their investment and philanthropic acts.

Adeleke, who recently claimed that Oyetola stole his mandate in 2018, boasted of his family’s investment in the state, while promising to attract international investors if voted in today.

“We (candidates) must ask ourselves what we have done in our state. I will make sure I reduce corruption so that people coming to invest would be rest assured that their money would not end up in others’ pockets,” he said during a recent debate.

A member of the party, Bankole Omisore, said Adeleke was popular because of his investment in human capital, as well as his programmes, which resonate with the people.

“People want proper representation. The good people of Osun want Adeleke, they want PDP, and the people will defend their votes under the provisions of the law,” he said.

The Osun Resident Electoral Commissioner (REC), Pro Abdulganiy Raji, said that out of the 1,955,657 registered voters, over 1,463,047 permanent voters’ cards had been collected in readiness for today’s poll, representing 70 per cent.

Raji also said the commission had deployed all the resources needed for the success of the exercise.

Today’s exercise, which will be the last off-season election, is seen as a litmus test for the two major political parties in the country ahead of the 2023 general elections.

However, some political watchers have predicted violence and vote buying by the major political parties, in an attempt to influence the electorate following an alleged influx of thugs into the state.

Helicopters also hovered in the sky as several armoured personnel carrier vehicles were deployed in the streets in a show of force to deter political thugs.

The police which deployed 21,000 personnel for the exercise, warned trouble makers to stay away from voting areas.

Meanwhile, the NSCDC said it had deployed over 11,000 personnel for the election, while assuring residents and electoral officers of adequate protection.

The deputy commandant-general of the corps, Dauda Mungadi, said their officers and men on election duties in the state had undergone a series of training and would act professionally.

It was gathered that a prominent leader of the National Union of Road Workers (NURTW) in the state was picked up by soldiers.

Residents said the heavy deployment of security agents was in response to the tense atmosphere in the state in the buildup to the poll.

They, however, vowed that such situation would not deter them from coming out to cast their votes.

A resident, Kunle Ogundele said, “People will troop out for the election despite the security issue. We can see the police patrolling our roads and the sky to assure residents of maximum protection.

“People are ready to cast their votes despite the issue of vote buying. We will collect money from the opponents and still vote for our candidates of choice.”

Another resident, Demola Ahmed said, “As it is now, everything is settled and people are expected to come out en masse, especially with the heavy presence and constant patrol of the town by security agents.

“On the issue of vote buying or money politics, Osun will vote for who they really want and collect money from wherever they get it from. But the election is going to be decided more on party and personality. We are tired of suffering and want to vote for who we love and believe can meet our expectations.”

A trader in Osogbo, Folashade Bello, said the people already knew who they would vote for despite any inducement from politicians.

Mrs Grace Oguntuyi also said, “Security or no security, we will come out and vote for the right candidate. We need peace and progress in this state.”

Counsel to the PDP, Hashim Abioye, sought an order of interlocutory injunction from the court to prevent Amotekun corps from partaking in the process.

Issuing the order, Justice Emmanuel Ayoola stated, “The defendant is hereby restrained from requesting the deployment of the 2nd defendant (Amotekun) as part of the security personnel deployable for the purpose of Osun 2022 governorship election pending the determination of the originating summons filed in this suit.

The chairman of INEC, Professor Mahmood Yakubu, has urged workers involved in today’s governorship election in Osun State to stick to the oath of neutrality they swore to and ensure the success of the exercise.

Making the call yesterday in Abuja, Yakubu stated, “The people of Osun State and Nigerians will hold us to our promise. They will observe our attitude and behaviour from the opening to the closing of the poll.

“They will particularly observe our management of the election results and measure the extent of our adherence to the extant laws through every stage of the electoral process.”

He also urged INEC staff to display a sense of commitment and professionalism, remain above board and firmly resist any unethical behaviour.