The people of Osun are set to elect a new governor on July 16, 2022, that will administer the affairs of the state for the… 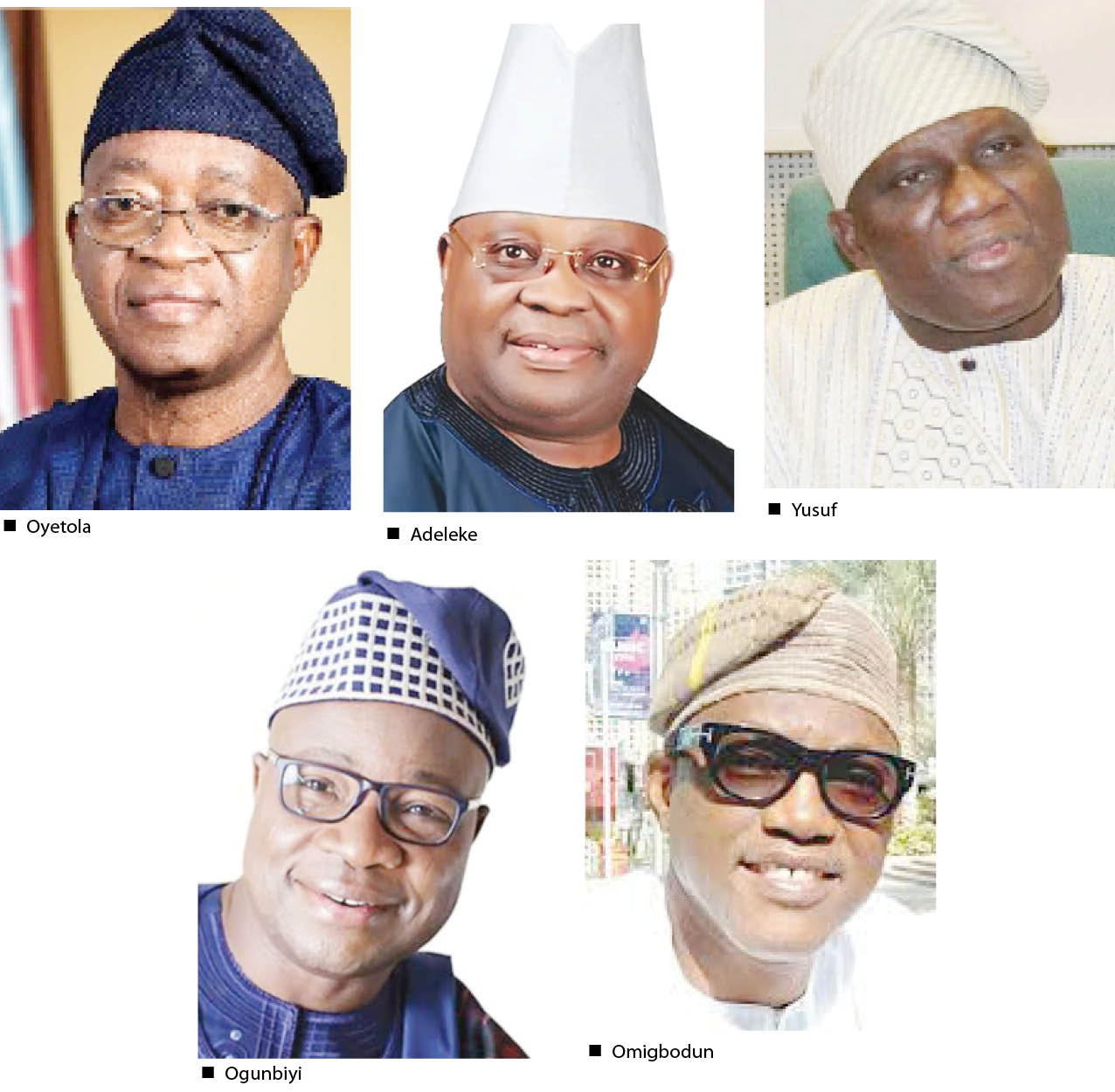 The people of Osun are set to elect a new governor on July 16, 2022, that will administer the affairs of the state for the next four years as the first tenure of the incumbent Governor, Mr Adegboyega Oyetola, who was sworn in on November 27, 2018, on the platform of the All Progressives Congress (APC) will elapse on May 29, 2023.

INEC has also announced that 15 political parties are fielding candidates for the election, including Gov Oyetola.

But our correspondent reports that of the 15 candidates, only five are popular, while the rest are not known to many people in the state.

The five popular candidates are Governor Oyetola, Architect Goke Omigbodun, Senator Ademola Adeleke, Mr Lasun Yusuf and Dr Akin Ogunbiyi, and they have been embarking on vigorous campaigns to sell their manifestoes to the electorate.

He is the candidate of the ruling APC and incumbent governor of the state. Born on September 29, 1954, in Iragbiji, Oyetola bagged a BSc in insurance in 1978 and a Master of Business Administration (MBA) in 1990.

In 1980, Oyetola began his career in the insurance industry as an area manager with Leadway Assurance Company Limited, Lagos, and stayed till 1987.

He worked as Underwriting Manager at Crusader Insurance Company Limited from 1987 to 1990, before his appointment as Technical Controller at Alliance and General Insurance, a position he held till 1991.

He founded Silver Trust Insurance Brokers Limited in 1991. He also served variously on the boards of leading organisations with interests in finance, real estate, among others, before leaving to take up appointment as the Chief of Staff to the then Osun Governor, Rauf Aregbesola, between 2011 and 2018.

However, Oyetola’s chances of winning a second term are being threatened by the crisis bedeviling the state chapter of the party, and especially as he is at daggers drawn with his predecessor, Aregbesola.

The suit instituted by Aregbesola’s preferred candidate, Moshood Adeoti, a former Secretary to the State Government (SSG), over the APC governorship primary subsists at the Federal High Court in Abuja and the judgement is expected to be delivered on July 13 (three days to the election).

He is the candidate of the Peoples Democratic Party (PDP) and he hails from Ede town. He was candidate of PDP in the 2018 governorship election in the state. He represented Osun West Senatorial District between 2017 and 2019, but his educational qualifications are surrounded by controversy.

He was said to have attended a secondary school in Ede but did not pass WAEC. Prior to the 2018 governorship election, he registered for another WAEC to make up for INEC’s requirements and this triggered another controversy. Adeleke invited friends and associates to his graduation at a university overseas.

He belongs to the Adeleke political dynasty; leveraging on the political structure and goodwill of his brother, late Senator Isiaka Adeleke, and the financial muscle of his billionaire brother, Dr Deji Adeleke, father of popular singer, David Adeleke.

He is one of the popular candidates in the race for the top job. His campaign has also attracted controversies. He has been criticised for promising to buy a jet for the Ooni of Ife if elected governor, for boasting that he had brought huge money in foreign currencies for the election and for evading election debates. He is also battling a crisis in the PDP which may affect his chances.

Worst of all, top politicians in PDP in the state, including a former Governor, Olagusoye Oyinlola; Alhaji Suaib Oyedokun and Senator Olu Alabi, seem not to be supporting or working for Adeleke as they seemingly preferred another aspirant, Prince Dotun Babayemi, as flag bearer of the party. With the support of top PDP leaders in the state, Babayemi was elected as PDP candidate at a parallel primary.

As a result, there were two PDP candidates in the state until a court ruling affirmed Adeleke as the validly elected candidate of the party. But Babayemi has appealed the judgement.

He is the candidate of the Labour Party (LP). He is a former Deputy Speaker of the House of Representatives. He represented Irepodun/Olurunda/Osogbo/Orolu Federal Constituency of Osun State on the platform of the APC.

Yusuf attended the University of Ibadan where he obtained a BSc in mechanical engineering. Before he became a legislator, he was the Chairman of Osun State Capital Territory Development Authority.

Yusuf was first elected into the Federal House of Representatives in 2011 and was re-elected in 2015. He left APC after a controversy that trailed the primary election of the party which produced Oyetola as candidate. He is adjudged to have performed well in various election debates in the state.

He is the candidate of the Social Democratic Party (SDP). He hails from Osogbo, the state capital. He is the Principal Consultant of his company, Goke Omigbodun Associates, Estate Surveyors & Valuers Firm.

He is an architect. He attended All Saints Primary School, Osogbo; Government College, Ibadan, and University of Ife, now Obafemi Awolowo University.

He later attended University of Ilorin and the University of Ibadan for further studies. He was the Chairman of Osun State Property Development Corporation between December, 2000, and May, 2003, in the administration Gov Chief Bisi Akande.

He served as the Programmes Monitoring Adviser (SPMA) to the United Nations Development Programme (UNDP) in Osun State. He equally served as Special Adviser to the Governor on Inter-Party Relations between 2008 and 2010 in Prince Oyinlola’s administration.

Though his presence is felt in most parts of the state and his posters and billboards all are over the state, his campaign is “low key” and mostly on social media and one-on-one. His media presence is very superb and he performed well in various debates organised for governorship candidates.

He is the candidate of the Accord Party (AP). He graduated in 1986 with a BSc in agricultural economics from the University of Ife.

His career in insurance started during his undergraduate studies when he ventured into agricultural insurance as his area of specialisation. Soon after graduation, Dr Ogunbiyi was employed in 1988 by the National Insurance Corporation of Nigeria (NICON) as a research and planning officer.

He worked in various strategic capacities within the corporation, including the training of chief executives of insurance companies from sister African countries.

In his entrepreneurial pursuits, he has taken quite some risks. He gave up an impressive and promising career at NICON to go into insurance consultancy – a business hitherto unexplored and without a precedent of success in Nigeria. He is the pioneer Chief Executive of Finance and Insurance Experts Limited, a firm of finance, insurance, environmental and management consultants. He is currently the Group Chairman of Mutual Benefits Group.

His campaign jingles were prominent on radio stations in the state and his campaign posters and billboards are seen across the state. He is said to have performed well in various election debates.