Osinbajo: Corruption is a disaster all Nigerians must unite against

Vice-President Yemi Osinbajo has said Nigerians must shun the disaster of corruption, embrace honesty and unite to build a great country. Osinbajo stated this at… 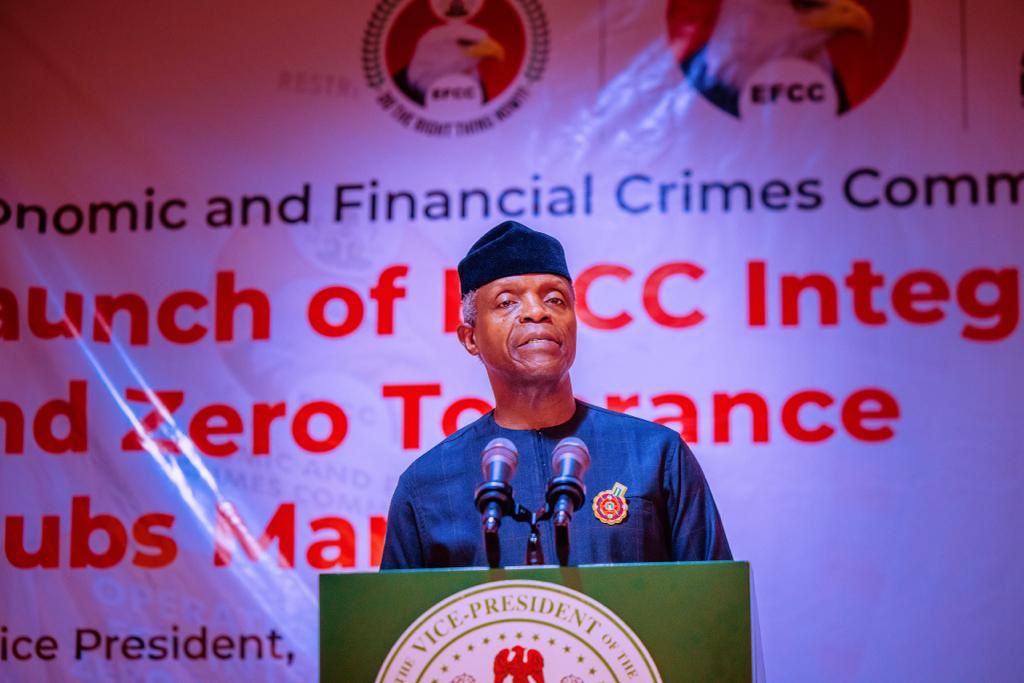 Vice-President Yemi Osinbajo has said Nigerians must shun the disaster of corruption, embrace honesty and unite to build a great country.

Osinbajo stated this at the official launch of the Economic and Financial Crimes Commission’s (EFCC) Integrity and Zero Tolerance Manual for school clubs, which held at the Model Secondary School Maitama, Abuja.

The VP praised the initiative as “a recognition that integrity, honesty, trustworthiness, are crucial individual and collective attributes for successful people and communities. Every corrupt act is not just a crime, it is a crime against society and even children yet unborn.”

Osinbajo noted that the establishment of the Integrity clubs is “a vital step in finally achieving this milestone in the building of the future against the disaster of corruption.”

He described the initiative as visionary and timely because “we must develop an anti-corruption army.

“That army is waiting in our schools, and we must teach them early that corruption is the worst destroyer of destinies and people, and we must fight it as you fight a mortal enemy in war.”

Speaking at the event which attracted dignitaries and members of the club in the school, the Vice President noted that the establishment of EFCC Integrity clubs in schools across the country was important because it embodies the values of honesty and hard work toward national development.

Osinbajo stated that “every public officer who steals, robs the Nigerian society of funds for health care, education etc,” adding that “we must become policemen against corruption and wrongdoing; whether it is a member of government or a shop assistant or your friend in class who is cheating, because they destroy our reputation.”

Emphasizing the need for integrity in society and for all Nigerians to project the right values, Prof. Osinbajo observed that if the country’s reputation was deemed poor by others, “it will affect all of us.”

According to him, Nigerians, especially the youth, must discard the false notion that “we can get ahead by cheating, or stealing whether in public or private life,” noting that “there are always consequences for wrongdoing.”

The VP also observed that “the greatest challenge which we face currently is how to safeguard the youth from the ethical crisis and confusion confronting our nation, and the error of thinking that there will be no consequence for defrauding others, your employers or the government.

“The reason why people may believe these false notions is that there seem to be many in our society whose wealth cannot be explained, many even among the young who live by defrauding others.”

Emphasising further, the Vice President noted that “it is an error to think that corruption pays.

“Many societies in the world were where we are today, but soon, they realized that no society can survive by dishonesty, greed and theft. The society will eventually collapse. What those societies did was take an all-of-society approach to fight dishonesty.

“The other fact is that many who think they can get away with corruption, are often surprised that the long arm of the law, even if sometimes slow will eventually catch up with the criminal.

“There is no time bar or statute of limitation against a crime. A man who steals this year can be arrested in 10 years’ time for his crimes, so when you steal, you cannot sleep with both eyes closed,” he said.

Commending the dynamic Chairman of EFCC, Mr. Abdulrasheed Bawa, for the worthy initiative (Integrity and Zero Tolerance against corruption), the Vice President recalled his personal journey in the advocacy for integrity in Nigeria.

“Sometime last year, the EFCC chairman while sharing one of his many ideas on anti-corruption strategies with me, told me about the plan for Integrity clubs in schools across the nation.

There were also representatives from the Governors’ Forum, Diplomatic Corps, development partners and Civil Society Organisations, as well as school principals from FCT Government Secondary Schools.