Napoli striker, Victor Osimhen, and Orlando Pirates defender, Olisa Ndah won’t be available for the Super Eagles when they play the Portuguese Selecao on Thursday… 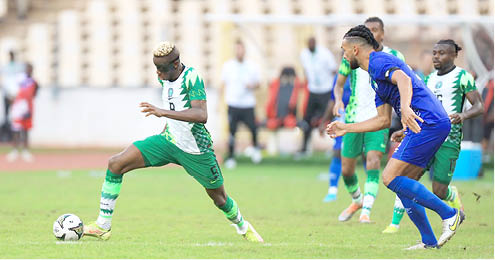 Napoli striker, Victor Osimhen, and Orlando Pirates defender, Olisa Ndah won’t be available for the Super Eagles when they play the Portuguese Selecao on Thursday in a friendly international match.

The Nigeria Football Federation (NFF) confirmed this development yesterday on their Twitter handle.

According to the NFF, Cyriel Dessers will replace Osimhen, while Chidozie Awaziem will take the place of Ndah for the Portugal clash.

Osimhen will now miss his second consecutive game for the Super Eagles after injury also ruled him out of their outing against the Desert Foxes of Algeria in September.

The on-form 23-year-old sustained an injury in Napoli’s 3-2 home win against Udinese last weekend where he opened the scoring for the Partonopei.

Ndah who last featured for the Super Eagles at the 2022 Africa Cup of Nation in Cameroon would have to wait for another time to return to the team after also picking up an injury in his clubside.

Head coach, Jose Peseiro has named Cyriel Dessers and Chidozie Awaziem as replacements for the duo.

Thursday’s friendly will take place at the Estadio Jose Alvalade, Lisbon with kick off billed for 7.45pm Nigeria time.

Meanwhile, Portugal began preparations for the friendly against Nigeria yesterday.

The first training session, according to Portuguese daily news outlet, Diario de Noticias, was held at the Cidade do Futebol.

The former European champions are using the friendly to prepare for the 2022 FIFA World Cup in Qatar.

Portugal are in Group H with Ghana, Uruguay and South Korea.