The embattled National Chairman of the All Progressives Congress (APC), Adams Oshiomhole, on Thursday visited President Muhammadu Buhari at the Aso Rock Presidential Villa in… 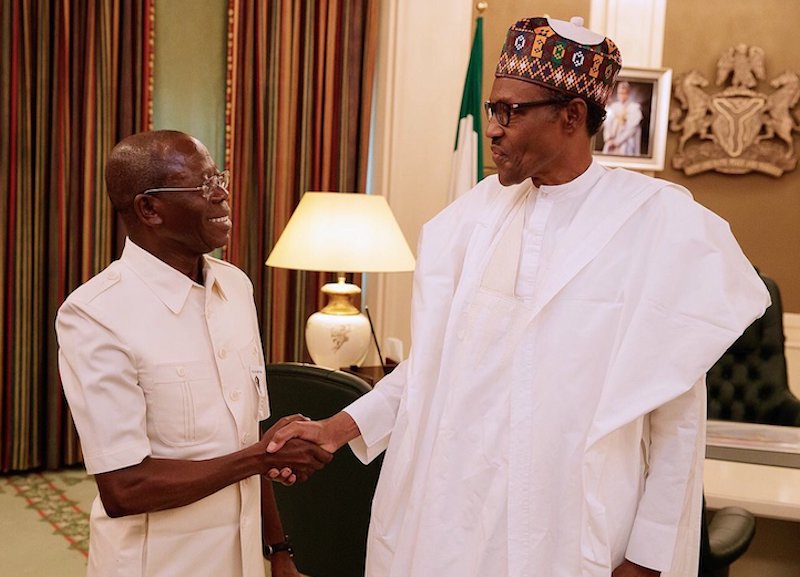 By Muideen Olaniyi and Opeyemi Kehinde

The embattled National Chairman of the All Progressives Congress (APC), Adams Oshiomhole, on Thursday visited President Muhammadu Buhari at the Aso Rock Presidential Villa in Abuja.

Oshiomhole, who was ordered by an FCT High Court to stop parading himself as APC National Chairman, said he met President Buhari in order to brief him on the issue while speaking with State House Correspondents.

He expressed happiness that a Federal High Court had vacated the order by a High Court which he said had no jurisdiction on the matter where federal institutions like the DSS was also joined.

He said that the decision to delay hearing of the case to April was to enable his opponents destabilise the party.

Daily Trust reports that an FCT High Court in Abuja had yesterday suspended Oshiomhole as the national chairman of the APC.

Justice Danlami Senchi, on Wednesday, ordered Oshiomhole to step down pending the determination of the substantive suit seeking his perpetual removal as the APC chairman.

The court order had followed a motion on notice filed on January 16 by Comrade Mustapha Salihu, the APC National Vice Chairman for North East; Anselm Ojezua, the party’s Edo State chairman; and four others.

The motion had Oshiomhole, APC, the Inspector-General of Police (IGP) and State Security Service (SSS) as the respondents.

There have been calls from sections of the APC for Oshiomhole to resign, just as he was suspended by the Edo State chapter of the party since November 2019.