Nineteen-year old Precious Ando was knocked down by a hit and run commercial motorcycle rider in 2013 while on her way back from school... 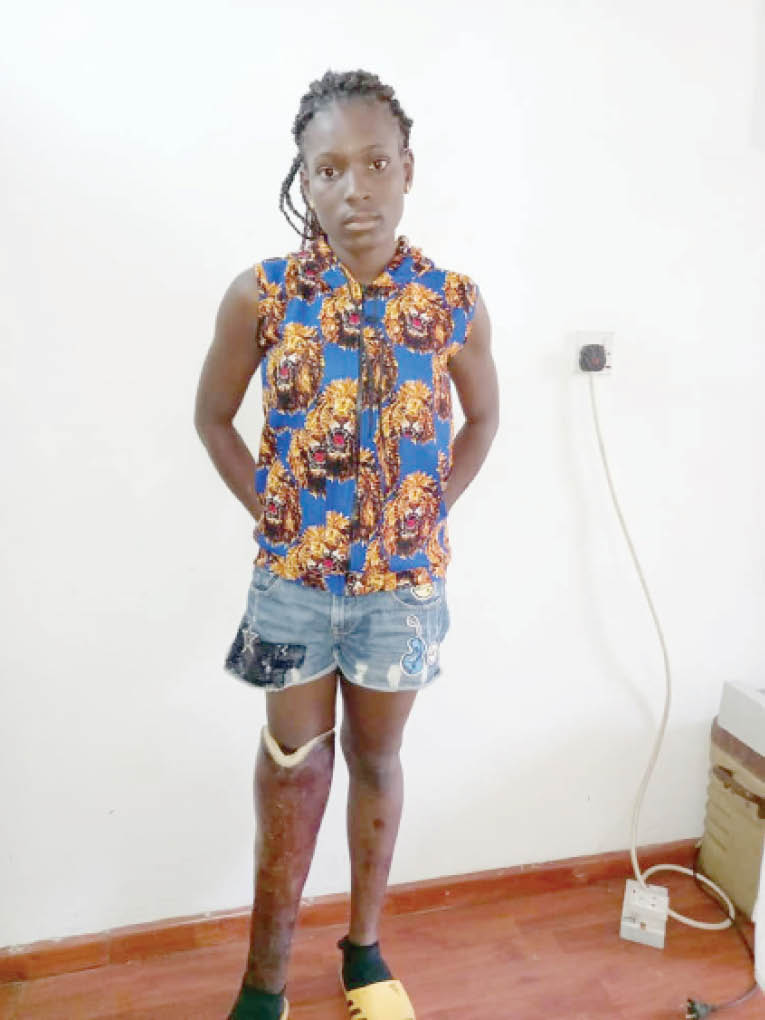 Nineteen-year old Precious Ando was knocked down by a hit and run commercial motorcycle rider in 2013 while on her way back from school in Ikorodu Area of Lagos.

Eight years after the unfortunate incident, the same fate befell her mother as she was knocked down by a driver while on her way back from farm.

The dream of the Obudu, Cross River State-born girl of becoming an accountant was almost shattered as the affected leg was amputated.

Before the amputation, immediately after the accident, Precious was rushed to a medical centre but was rejected because of the intensity of the fracture and referred to a local bone setter in Odoguyan in Ikorodu on the outskirts of Lagos. While in Ikorodu, the leg got worse and she was taken to Urgent Hospital, Victoria Island, Lagos; a center used by the staff of CFAO Motors where her father worked as a driver.

She got the shock of her life when management of the hospital informed her that CFAO Motors had asked that her treatment be stopped because the scheme did not cover her father’s family who was a contract staff in the company.

However, a Good Samaritan, Dr Chukwuyenum Olusegun Asanife, a trauma and orthopaedic surgeon at the hospital, took it upon himself to ensure that the girl did not only smile but walked again.

Precious told journalists that, “Dr Chuks is my father and my all in all. Though he is not my biological dad, but he is God sent. But for him and his family, especially, his daughter who lives outside the country, I would not have been able to walk freely on my legs like every normal human being again.

“When I heard that my leg was to be amputated, I was nervous, but when he promised me another one, I was happy. Apart from getting me another leg, he got me admission into Our Lady of Apostolic School, Ijebu Ode, and later Abeokuta Grammar School where I graduated. Daddy Chuks has been our all in all, he gives us money, even the small house that my mum is building it is Daddy who gave us most of the materials.

“Even now that my mummy was hit by a hit and run driver, and one man called Adebayo who came to support my mum was shot, it is still Daddy who is taking care of them. Adebayo is now at the Federal Medical Centre (FMC), Abeokuta, and my mum is at a traditional bone setting home.

When I was growing up wanted to be an accountant and a banker, but now if I can get admission into the university, I would want to read medicine and specialise as a trauma/orthopaedic surgeon like Daddy so that I can tell my story well. As for the Okada man who hit me and ran away, I have forgiven him because as Catholics we are taught to forgive those who trespass against us. I do not think he knew what he did.”

While in school, Precious’ anxious schoolmates wanted to see how her artificial leg was and so dragged her to a corner and in the process got the leg damaged. She thought that the action of her schoolmates was going to be the end of the road for her, but again, Dr Chuks took up the burden of the repair of the damaged leg and changed her from that school to another one; this time, a boarding house where she graduated in flying colours.

However, unlike her daughter’s plight, when Precious’ mother was knocked down, sympathisers did not spare the driver of the Hillux which had a Chinese occupant. A mob, mostly youths, including Adebayo Adegoke, a commercial bus driver repairing his vehicle across the road, joined in the pursuit of the fleeing driver. He was pursued to a company which turned out to be a Chinese company. But rather than come down to address the situation, the Chinese reportedly screamed, “Kidnappers, kidnappers”, and ordered the soldiers guarding the compound to open fire on the youths. Adebayo (36), widower and father of four, had his kneecap and thigh shattered by the soldiers’ bullets.

Again, it was Dr Chuks who came to their aid as he took up the bills of both victims.

Recounting how he got into the picture of the whole “drama”, Dr Chukwuyenum Olusegun Osanife, who hails fromDelta State, said, “I did not know where Precious came from until I came back from Germany where I went to get her an artificial leg. She told me she is from Cross River State. The truth is that I took pity on her seeing her condition. By the time she was brought to the hospital where I consult, the leg was already bad and smelling; so I thought within myself that she had to be amputated but first, I must get her consent. So I met with her and told her that I would have to amputate her leg and get her another. She looked straight into my eyes with hope and asked, “You’ll get me another leg?” I said yes and she said then cut it.”

“She was learning catering and make-up when we heard the sad news of her mother being hit in like manner about eight years ago and again. I had to come in fully too because both mother and child have taken me as their saviour.  Moreover, the manner of the accident showed gross injustice by foreigners in our own land. To worsen the situation, a man who was among the sympathisers seeking justice for the wounded woman was shot by our own soldiers working for these heartless foreigners. I am taking this personal. I have petitioned the AIG Zone 2 through my lawyers and I am sure at the end of the day, both Precious’ mother and Adebayo Adegoke will get justice.”