One year after protest, work yet to commence on East West Road 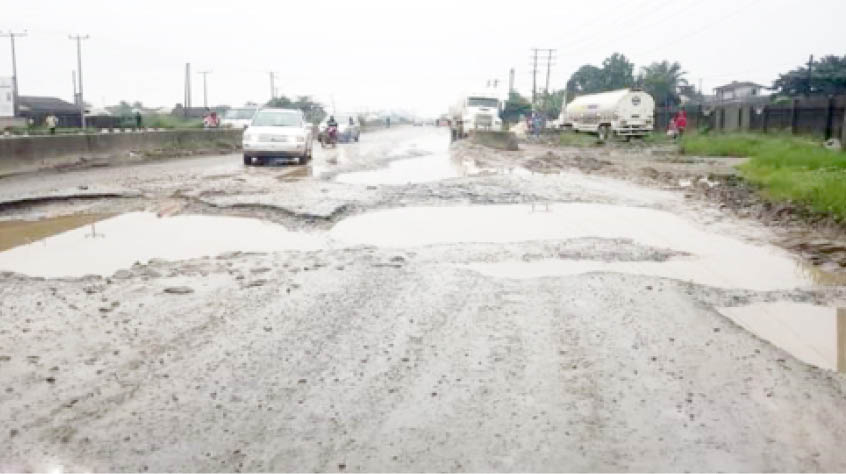 Deplorable section of the road

Nearly one year after hundreds of youths from various Ogoni communities and members of the Civil Society Organisation occupied the East West Road in protest against its poor state, work is yet to commence on the road. Daily Trust Saturday reports.

Protesters had in July 2021, barricaded the road and occupied the two sections of the road for seven days—a development that left hundreds of commuters stranded.

The angry youths, who were armed with various placards, protested the failure of the fededral government to fix that portion of the road which is in a state of dilapidation.

The youths, who were mobilised in their numbers, blocked the road at Akpajo, Refinery Junction and Trailer Park ends of the road and stopped motorists from using it.

The protesters deflated tyres of articulated vehicles, which they used to block the roads. Thousands of stranded commuters were forced to trek several kilometres to catch transportation at either ends of the hold up.

The protest obstructed business activities of major companies such as Nigeria Ports Authority, Port Harcourt Refinery Company and other military establishment located along the stretch of the road.

The protest later took a dramatic turn when the protesters brought in cooking utensils and food items which they used to cook and serve themselves. Given the adverse effects the protest had on business activities along the stretch of the road, the former Minister of Niger Delta Affairs, Senator Godswill Akpabio, intervened and promised to commence the immediate reconstruction of the road.

The former minister met with the protesting youths and leaders of various Ogoni communities and promised to mobilize contractors to site.

Many buildings affected by the project were marked for demolition while verification of genuine property owners were carried out for the payment of compensation.

Our reporter learnt that about N10bn was released to the Federal Ministry of Work by the Federal Executive Council for the commencement of work on the road while the contractors were immediately mobilised to the sites. They (contractors) were sighted marking signs and survey of the stretch of the road while project signposts were mounted on strategic parts of the road two weeks after the protesters vacated the road.

But the contractor was said to have vacated the site less than three months after they were mobilized to the site.

The poor state of the East West Road has become a torn in the flesh of hundreds of commuters who traverse the road on a daily basis. It is the only access road to Akwa Ibom and Cross River, as well as other neighbouring communities to Ogoni such as Andoni, Okrika and Opobo.

When our reporter visited the stretch of the road last week, the signpost of the Ministry of Works and the contractor awarded the contract were seen mounted on strategic parts of the road.

Some of the organizers of the protest, who spoke with our reporter, expressed disappointment that the road project is yet to commence despite promises made by the federal government that work will start.

Mr Celestine Akpobari, one of the organizers of the protest, said the inability of the Ogoni community leaders to follow up the directive of President Muhammadu Buhari on the road and the insistence of former Minister of Niger Delta Affairs, Godswill Akpabio, that the project should be handled by his ministry is the reason why the project is yet to commence.

Mr Akpobari said President Muhammadu Buhari directed the Presidential Infrastructure Development Fund (PIDF) to take over the project soon after the leaders of Ogoni community met with him but expressed displeasure that those who were at the meeting and some government officials did not follow up the directives.

“Because of the protest carried out by the youths of Ogoni communities and members of Civil Society Group, Ogoni leaders met with President Muhammadu Buhari in Abuja. The president accepted all that we demanded. We pleaded with Mr President that the road should be taken over by the Presidential Infrastructure Development Fund because this agency has carried out good works in Lagos and Abuja where it constructed good roads and bridges. The president accepted our demand and directed that the project be moved to PIDF but the Minister of Niger Delta Affairs did not like it because he wanted the project to be handled by the Ministry of Niger Delta Affairs where the contract will be awarded.”

“We prefer PIDF because they don’t award contracts. They carry out the project themselves. It’s very unfortunate that some of the leaders of Ogoni community who met with Mr President instead of following up the directives by the President started doing another thing contrary to what we agreed with President Buhari. This is what has delayed the project,” he said.

He said the ministry of works later got the  sum of N10bn for the commencement of the project and expressed hope that work will soon commence on the project.

Another organizer of the protest, Fyneface Dumnamene, said the road has remained a death trap to hundreds of commuters who ply the road on daily basis.

“The East West Road has remained a death trap despite the protest carried out by hundreds of Ogoni people. The promises made by the federal government that it will commence work on the project has failed. So far, no action has been taken on the road. We demanded that the project should be moved from the Niger Delta Ministry to PIDF which the president approved but it has not been done. The Ogoni leaders paid a visit to the presidency and lots of promises were made to ensure that the road was fixed but till date, nothing has been done and the road is now worse than what it used to be before the protest. We are going to hit that road again very soon because the road has become so bad that motorists cannot move freely. Neighbouring states and communities connected to the road cannot pass through the road because of its poor state,” he said.

He said the communities concerned about the road are discussing on how to take over the East West Road until their demands are met.

The leader of Ogoni Peoples Assembly, Rev. Probel Williams, who also participated in the protest, said the people of Ogoni will shut down East West before the general election if work does not commence on the road.

He said the sum of N10bn given to the ministry of works for the project will not be able to pay compensation to property owners along the stretch of the road, noting that the money is too small for the project.

He said that his group has requested to see the design of the road from the ministry but its request is yet to be granted.

“The only language the federal government understands is violence. When you carry out a peaceful protest, nobody will take you seriously. We have carried out a peaceful protest to draw the attention of government on the pitiable state of East West Road. Nearly one year after the protest, nothing has been done on the road. We are yet to see the drawing of the proposed road they want to reconstruct. We want to see the drawing so as to know what they intend to do because we don’t want a project that cannot stand the test of time. We are not happy with what they are doing but one thing we are going to do is that we are going to occupy East West before the general election,” he said.

The state of the East West road has deteriorated in recent times with motorists spending several hours on the road to get to their various destinations. Recently, lives have been lost as a result of accidents that occurred on the road.

Hundreds of commuters who ply the road on daily basis heaved a sigh of relief after the protest last year when the federal ministry of works mobilized contractor to the site. But the contractor withdrew from the site shortly after.

Efforts made to speak with the federal ministry of works on the issues concerning the project was unsuccessful but a staff from the office of Controller of Federal Ministry of Works in Port Harcourt who spoke on condition of anonymity said the contractor has been mobilised to site, saying work will soon commence.