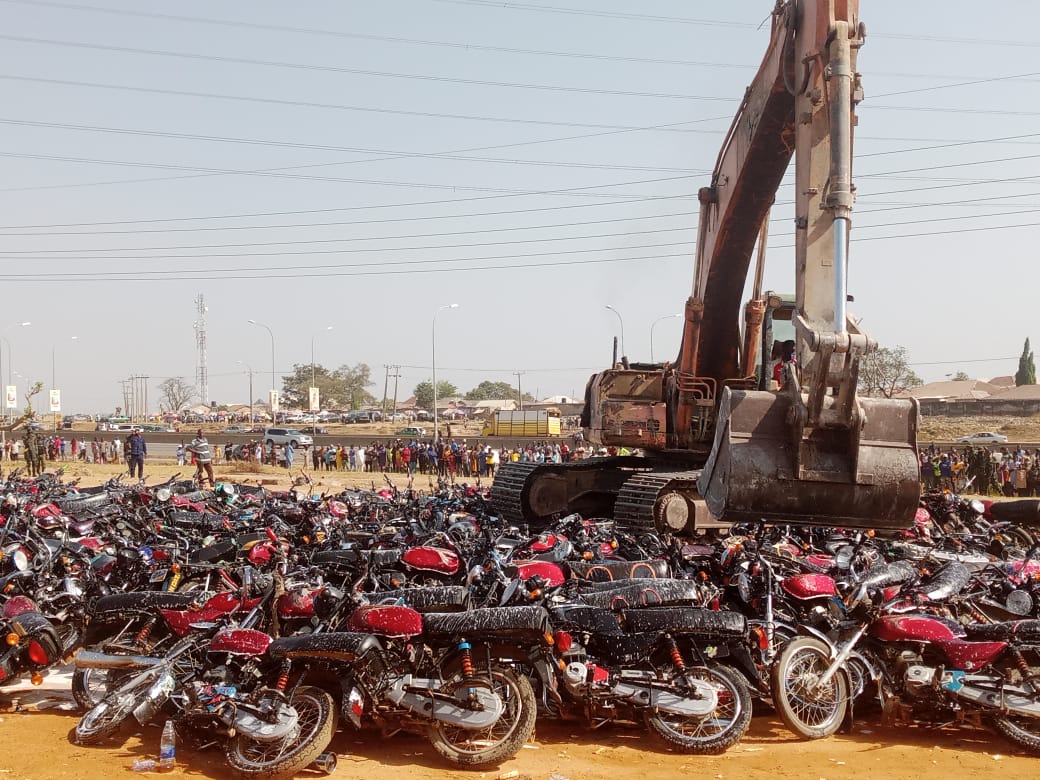 The Federal Capital Territory task force and joint enforcement team, on Thursday, confiscated and crushed 432 commercial motorcycles, popularly known as Okada, operating within the city centre and other prohibited areas.

The News Agency of Nigeria (NAN) reports that the crushing of motorcycles was witnessed by the officials of the Federal Capital Territory Administration (FCTA) and representatives of various security agencies.

NAN also reports that the exercise took place inside an open space at Lugbe car wash, along the Airport road corridor.

Others were the popular Lugbe car wash as well as the Police signboard, along Airport Road, all in Abuja Municipal Area Council (AMAC).

Reacting to the development, the Chairman of the taxi operators association, Car wash bus stop, Adebola Oluomo, said, “without the exercise, the road would be closed, as there were a lot of obstructions due to the activities of the defaulting Okada operators.

He said: ”They are always on the expressway riding recklessly against the traffic and nobody could control them.

“The task force was always coming around but the Okada operators will be stoning them, as they believe that they are the owners of Abuja.

“So, the government should continue with the exercise as such Abuja will be very clean and the roads will be safe for all.”

Justifying the exercise, the Secretary, FCT Transportation Secretariat, Abdullahi Candido, reiterated that government would not relent on its sustained efforts to rid the city of the menace.

Candido warned the operators and owners of commercial motorcycles to keep off the major roads of Abuja, especially the city centres and the gateways into the FCT.

Similarly, Director, Directorate of Road Traffic Services (DRTS), Abdulateef Bello, said the exercise, which was the third in the series of its signature enforcement of the ban on okada operations in the city, was proof of its zero-tolerance of the menace.

Bello said: “Okada riders’ insistence to operate in the city is no longer a traffic offence, but a serious security breach.

“It required the intervention of the government, hence the involvement of military and paramilitary agencies to effectively tackle it.” (NAN)