Oil spills: Niger Delta communities ‘get’ over N836bn in 7 years

In the last seven years, various courts have awarded the sum of N836.318bn (N98.318 billion and over $1.8billion) to oil-producing communities in Niger Delta as… 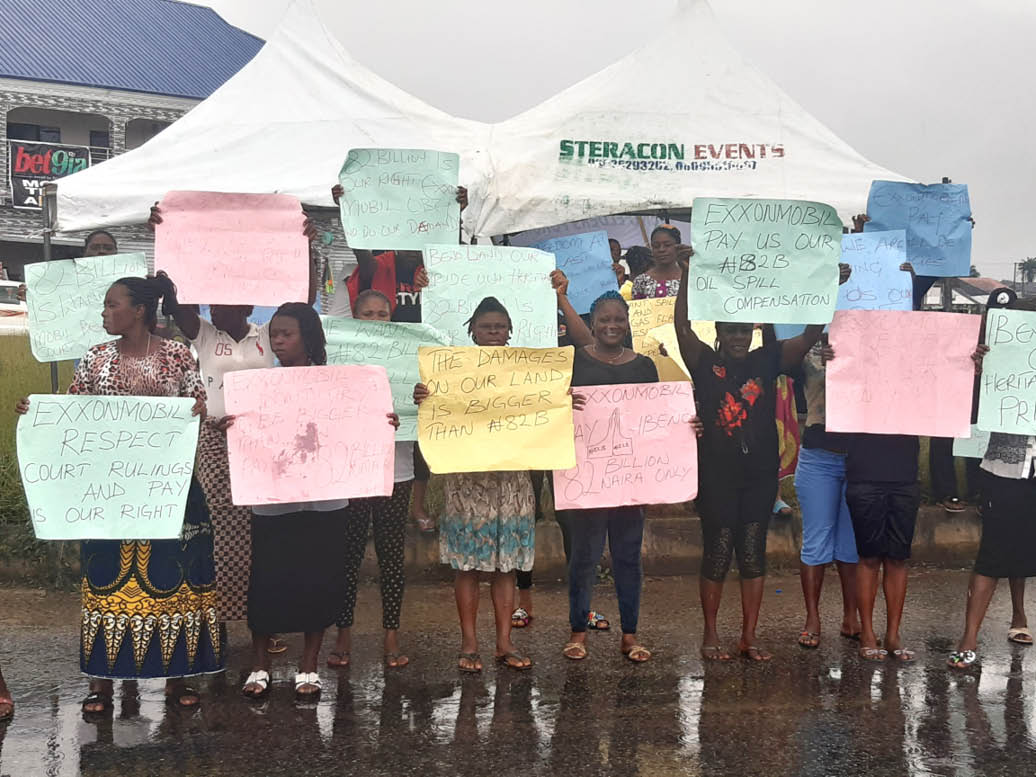 In the last seven years, various courts have awarded the sum of N836.318bn (N98.318 billion and over $1.8billion) to oil-producing communities in Niger Delta as compensations for oil spills and land encroachment, an independent data seen by Daily Trust on Sunday indicated.

Some of the court’s decisions are however being challenged at appellate level.

Since the discovery of crude oil in commercial quantity in Oloibiri community in Ogbia Local Government Area of Bayelsa State in 1956 and its subsequent extraction in 1958, complaints and struggle of host communities in the region have largely hinged on environmental pollution, occasioned by oil spills and gas flaring.

These host communities have battled multinational oil companies operating in their areas for compensation and cleanup, a situation that led to many legal battles. Some of these legal tussles end up with award of billions of naira as compensations to the communities.

In 2014, a High Court awarded N205.60 million to Okia community in Delta State, while Obotobo, Sokebolo, Ofogbene and Ekeromor Zion communities were awarded N30.2 million on August 14, 2015 by the Supreme Court of Nigeria.

The latest was Ibeno community in Akwa-Ibom State, which was awarded N81.9 billion on June 21, 2021.

However, despite the many court judgements awarding billions of naira as compensations, Daily Trust on Sunday observed that the condition of the people of Niger Delta communities ravaged by oil spills have not improved.

The oil companies that mostly operate in these communities include Shell, Agip and Conoil.

Checks by our correspondent revealed that most of the communities hosting oil platforms are still languishing in poverty, hardship and lack of social amenities while oil exploration is going on.

In most of the oil-bearing communities, their sources of potable water, farmlands and rivers they used for fishing have all been polluted by the activities oil companies without any effort for remediation.

This year alone, there were over six incidents of oil spills in different communities in the state with its attendant effects of pollution, forcing several communities to institute legal actions against the oil companies.

It was gathered that some communities that have secured judgement against oil companies are finding it difficult to get payment.

Last February, a Dutch Court of Appeal ruled in favour of four farmers in Oruma community, Ogbia Local Government Area, ordering the Nigerian subsidiary of Shell Petroleum Development Company (SPDC) to pay compensation to the farmers over the oil spills that impacted negatively on their crops.

The court also ordered the SPDC to carry out a cleanup of the area over a 2008 oil spill that adversely impacted their farms.

In his reaction to the court verdict on Oruma community last February, Mr Bamidele Odugbesan, the media relations manager of the SPDC, said the company was disappointed by the verdict, insisting that the incident in question was caused by sabotage.

He noted in a statement that most leaks from its operations were caused by vandals.

He stated, “We continue to believe that the spills in Oruma and Goi were the result of sabotage. We are, therefore, disappointed that this court has made a different finding on the cause of these spills and in its finding that the SPDC is liable.”

He, however, told Daily Trust on Sunday that on the issue of Goi and Oruma, a potential settlement option was being explored.

Ibeno is one of the oil-rich communities in Akwa Ibom that has placed the state as one of the highest earners for the Federation Account.

A Federal High Court in Abuja had on June 21, 2021 awarded a cost of N81.9b to be paid as compensation by the ExxonMobil Oil Company.

Daily Trust on Sunday reports that the money-spinning drilling of oil has left many communities in the area in a pitiable state.

Our correspondent gathered that oil spills are regular occurrences in the environment as no year passes by without one.

The secretary of the Village Council of Okoroutip community in Ibeno, Mr Enyina Wilson, attributed the spills to corrosive oil pipelines. He added that the spills had destroyed both their water and soil, saying they can no longer plant crops.

He said the community had been forced to resort to drinking refined water as they cannot drink from natural sources due to pollution.

He said gas flaring activities by ExxonMobil had destroyed the roof of houses in the area, such that whenever it rained, particles from flared gas and oil could be found floating on top of the water.

Wilson said that even the atmosphere had been contaminated by oil drilling activities and spills, adding that sometimes during the daytime, the atmosphere would emit smoke that is injurious to the eyes and harsh to the body.

“During the dry season, buildings vibrate at night. Our roofing sheets, except long-span, don’t last more than six months. It has affected the lifespan of people in the community. People don’t live up to 80 years; highest would be 76. So, if we don’t maintain ourselves, we grow old quickly,” he stated.

He also revealed that oil spills had impacted negatively on the economic fortunes of the people, adding that its frequency had destroyed aquatic life in the area.

He lamented that the community, which used to be rich in seafood like periwinkle and fishes (which were readily available in the swamps, streams and rivers), now travel towards Cameroon to catch fish.

He lamented that despite the situation in the community, ExxonMobil was not treating them well.

Recently, the president of Ibeno youth/woman leader, Ms Maureen Effiong, who led a protest on the plight of the community, insisted that ExxonMobil must pay the community the sum of N81.9b awarded them by a court in June 2021.

Already, Ibeno stakeholders had in a town hall meeting in the palace of their paramount ruler, His Royal Majesty, Owong Effiong Archianga, started strategising on how to spend the compensation fund.

They set up a 15-man management committee to ensure the payment of the compensation to Ibeno communities within a reasonable timeframe.

But their hope of receiving the compensation may still be a pipe dream as ExxonMobil has disagreed with the position of the court on the matter, Daily Trust on Sunday learnt.

In an official mail on the position of the company to our correspondent in Uyo, Mr Oge Udeagha, the manager, media and communication of ExxonMobil, said the company had appealed the decision of the court.

He said, “Mobil Producing Nigeria, operator of the joint venture with the Nigerian National Petroleum Corporation, disagrees with the decision of the court and has appealed the decision.

“We will continue to prioritise the health and safety of our people, communities and environment where we operate.”

The Hague Court of Appeal had, in the judgement, held Shell’s Nigerian subsidiary liable for two leaks that spewed oil over an area of a total of 60 football pitches (soccer fields) in two villages, saying it could not be established “beyond reasonable doubt” that saboteurs were to blame. Under the Nigerian law, which was applied in the Dutch civil case, the company is not liable if the leaks were the result of sabotage.

One of the farmers involved in the case and a traditional ruler in Goi, Chief Eric Dooh, commended the verdict, saying it was a victory “for the entire Niger Delta region.

The case will, however, be continued as the court wants clarification about the extent of the pollution and whether it still has to be cleaned up.

In 2013, The Hague District Court ordered Shell Nigeria to compensate one of the four farmers involved in the case for making it too easy for saboteurs to open a well head that leaked onto his land. However, the court cleared Shell of blame in the pollution of the other three farmers’ lands and ruled that Shell’s Dutch parent company could not be held liable.

Both sides appealed and judges ruled in 2015 that Shell could be held to account in Dutch courts for its actions in Nigeria. The judges also ordered Shell to give the plaintiffs access to documents that could shed more light on the cause of the leaks and how much Shell management knew about them.

But the traditional ruler of Goi, Chief Dooh, told Daily Trust on Sunday that his community and some of the farmers who were affected by the oil spill were yet to be compensated.

He called on Shell to expedite action towards the payment of the compensation and cleaning of the polluted environment.

Speaking, an environmental activist, Fnyface Dunamene, told our correspondent that Shell was yet to compensate many of the Ogoni communities impacted by oil spills.

“In terms of payment of compensation in Ogoniland, it is in a few cases that it has happened. I think the issue of compensation should be taken seriously, especially when the incident that caused a spill is attributed or traceable to equipment failure by oil companies through a joint investigation visit.

The SPDC said it was exploring potential settlement plan with its Ogoni host communities concerning all the issues of compensation arising from court judgements.