Students of the Moshood Abiola Polytechnic, Abeokuta, Ogun State, on Monday, shut the school gate and disrupted the ongoing examination in protest against an “outrageous… 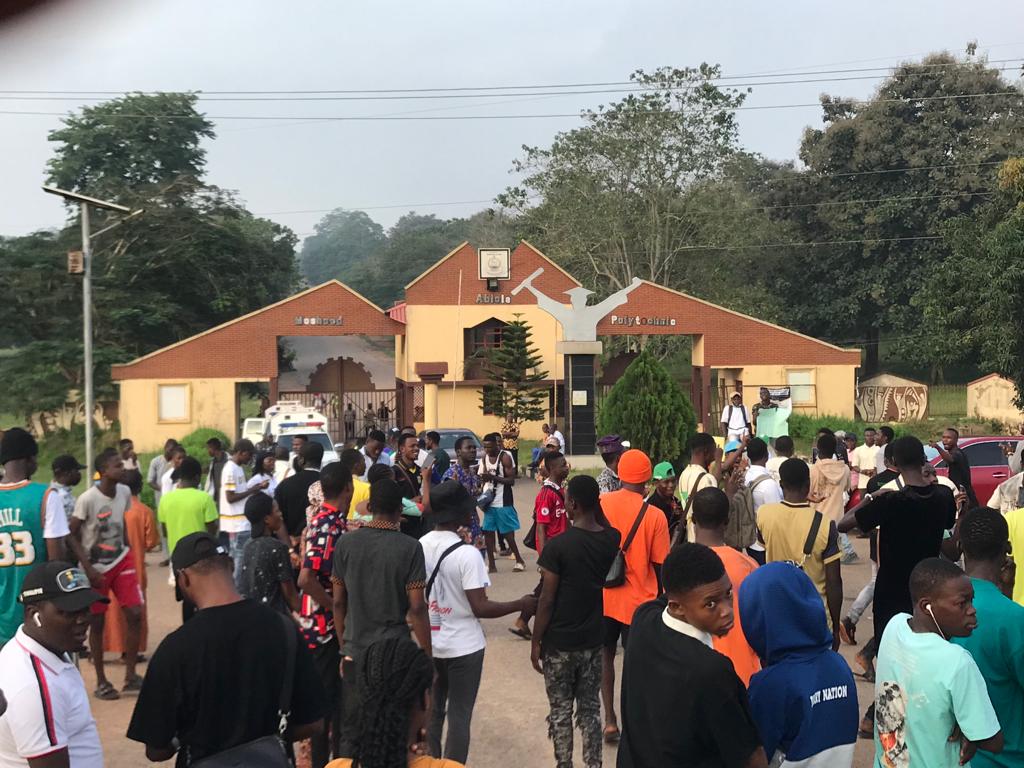 Students of the Moshood Abiola Polytechnic, Abeokuta, Ogun State, on Monday, shut the school gate and disrupted the ongoing examination in protest against an “outrageous fees.”

The aggrieved students in collaboration with the National Association of Nigerian Students (NANS), Ogun Axis, paralysed academic activities over increment of school and acceptance fees.

Boy fakes own kidnap in Ogun, demands N10m from parents

In their hundreds, the students as early as 6am on Monday barricaded the gates leading into the polytechnic, preventing entry and exit from the school.

They also disrupted the ongoing second semester examination from holding as other students coming for the exams met the entrance under lock and keys.

The protesting students, singing solidarity songs, carried placards with various inscriptions like ‘We no be rich kids, na why we come MAPOLY’, ‘#Say No To Unreasonable Increment Now !!!’, etc.

Addressing journalists, the Chairman of NANS in the State, Damilola Kehinde, insisted on the complete reversal of the increments and introduction of new fees in the school, as a condition to end the protest.

The students also demanded investigation of the management of the institution for alleged misappropriation and mismanagement of funds in the school.

The statement reads in part, “We are disheartened to converge here today, not for celebration but to decry the suffering and panic the management of the MAPOLY has subjected us to as students.

“Our offense as Nigerian students is that we want to be educated and the Dr Adeoye Odedeji led management of MAPOLY is saying education is not for the poor.

“Few months ago in the last academic session, tuition fee for both ND and HND students was increased including part time students whose figure is not accurately given.

“We resisted this increment and came to a benchmark of reduction in the initially added amount after due consultation.

“The clear promise made to the students’ body by this same Dr Odedeji and other members of the management team is that there will no longer be increment. At least, not in his own time as the Ag. Rector.

“Little did we know that he was only waiting for the state government to confirm his appointment as substantive Rector before unveiling his anti-poor policy to make MAPOLY unaffordable for the masses.

“Without considering the economic conditions of parents and guardians, tuition fees were increased outrageously again for two consecutive sessions. This is the highest level of discomfort any management could think of putting the students through.

“We would have considered that lack of funding is the reason for increasing tuition fee as claimed by the management, but how do we reconcile that with the fact that the same Dr Odedeji and few of his associates in the school are buying generators, vehicles and other properties with and through the school resources and yet diverting it to be their private properties.

“Even with the last tuition fee increment, there is no significant change in the institution nor in the payment of staff salary.

“It is disheartening that cleaners and other ‘petty’ workers who are on as little as #10,000 salary per month are owed several months of their salary.

“It is only when it comes to maintaining infrastructures and paying staff salary that the management start complaining of no funds. But they manage to get the fund to finance their embezzlement and diversion.

“Under the same management, projects and contracts are awarded through nepotistic means and at high rate for their personal commission.

“This is to show that the problem is not lack of fund but the insatiable desire of the Rector and his friends to make illegal income by all means.”

The Public Relations Officer of the Polytechnic, Yemi Ajibola, could not be reached for comments as of the time of filing this report.

Our correspondent reports the management had cut down the new increment by 50 percent, but the students insisted that the fees must be reversed completely.