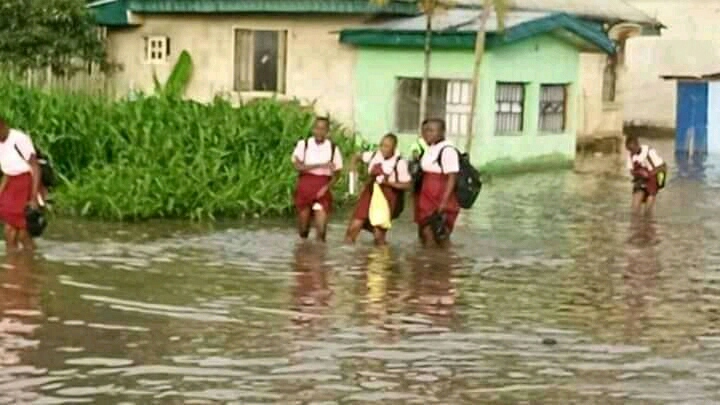 Students wade through flooded streets to get to school in Bayelsa

Ogun State Government on Tuesday directed residents of flood-prone and wetland areas across 24 communities to relocate temporarily as part of moves to avert flood disaster.

Also, farmers around wetland and riverbanks in the communities spread across ten Local Government Areas of the state, were asked to complete their harvesting before September.

The government said there would be high intensity of rainfall in September, resulting in a fluvial flood, hence, the alertness on the farmers to avert loss of their livestock and crops to flooding.

The Special Adviser to Governor Dapo Abiodun on Environment, Ola Oresanya, said this on Tuesday during an inter-ministerial briefing held at the Olusegun Osoba Press Centre in Oke-Mosan, Abeokuta.

According to him, there is need for the people to make personal preparation apart from the government’s efforts in order to avert the flood disaster that has been predicted to take place in the state between July and September 2021.

Oresanya explained that the Nigerian Hydrological Service Agency in its metrological report predicted that the state will experience serious flooding this year.

He noted that the temporary relocation would forestall loss of lives and damage to properties that could result from the impending flooding.

“This is targeted towards intimating members of the public on the weather outlook in the coming months as regards the rainy season that is upon us and its implication for the environment,” he said.

“As we approach the climax of the rainy season this year, the Nigerian Hydrological Service Agency (NIHSA) metrological report predicted that Ogun State will experience flooding this year. And knowing the devastating impact of the previous flood disaster in the State, residents of the State are advised to prepare for flash floods during the month of July, especially between 8thand 15th July 2021.

“Also a high-intensity rainfall is being expected in September 2021 that will result into a fluvial flood (river flood) because the soil would have been saturated by then and likely release of water from Oyan Dam will compound the rise in water level.

“In view of the above, residents of flood-prone and wetland areas across the State are hereby advised to temporarily make provision for a safe environment to avoid the severe impact of this natural event.

“Farmers around the wetlands and river banks are also strongly advised to complete their harvesting before the above stated time to avert loss of their livestock and crops to flooding.”

Speaking on efforts made by the government to avert flooding in the state, Oresanya explained the government has embarked on clearing of some drainage channels across the state.

He also disclosed that the Ministry of Environment has set up a State Flood Emergency Management Unit to intervene in an emergency.