A South Africa returnee, Ayodeji Eweje, has been shot in the leg and labelled a cultist by operatives of the Ogun State Security Network, alias Amotekun,… 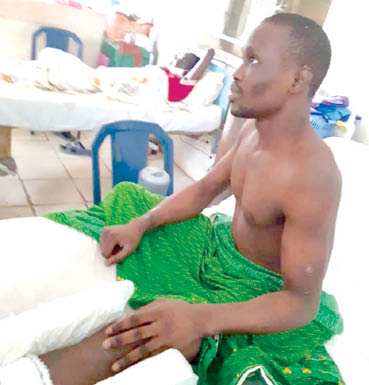 A South Africa returnee, Ayodeji Eweje, has been shot in the leg and labelled a cultist by operatives of the Ogun State Security Network, alias Amotekun, his mother has alleged.

The aged mother, Amoke Eweje, told newsmen that her son was on the verge of being amputated due to the gunshot injury at the Federal Medical Centre (FMC), Abeokuta.

Eweje told newsmen that, “I just returned from South Africa where I had gone to seek greener pasture, but on getting to Abeokuta, I saw that the whole thing had changed, and I was excited with the transformation at my area in Adigbe. I decided to step out that fateful day, and as fate would have it, it was the day the governor was commissioning the Panseke-Adigbe Road.

“I joined other onlookers at the overhead bridge at Panseke when the law enforcement officers told us to leave; I obeyed. But maybe the man thought I was not fast enough, he got grip of me and handed me over to the Amotekun Corps, and after the commissioning, rather than for them to allow me to go, the Amotekun men took me to their office at Oke-Ilewo without telling me my offence.”

Eweje said the operatives later took him to Imeko in Imeko Afon LGA and that one of the Amotekun men shot him in the leg, alleging that, “I wanted to escape from custody.”

Eweje further said he was locked up in a dark room for about three months without being charged to court, just like the Amotekun failed to inform his family of his whereabouts.

His mother, therefore, appealed to the state government to “save the soul” of her son.

She said, “Now they have destroyed his leg, he cannot walk again, they just abandoned him there at the FMC without taking care of his hospital bills or treatment. The hospital is asking us to pay millions of naira. The Amotekun is not paying a dime, the hospital has also threatened to discharge him if by Tuesday if we don’t pay. I know why they are doing this to me. It’s because we are poor and have nobody to fight for us.”

Reacting, the Amotekun Commandant, David Akinremi, described Eweje as a “notorious cultist who has been tormenting the Adigbe area of Abeokuta for a long time.”

“We tried to profile him but in the process he wanted to escape through the ceiling of the custody he was kept in. It was then our personnel shot at his leg and immediately we took him to hospital.”

He said the command had been responsible for his treatment and “will ensure that he is okay before he is taken to court.”