The Onojie of Ujiogba, His Royal Highness (HRH), Solomon Izuware, on Friday, assured the candidate of the Peoples Democratic Party (PDP) and Governor of Edo… 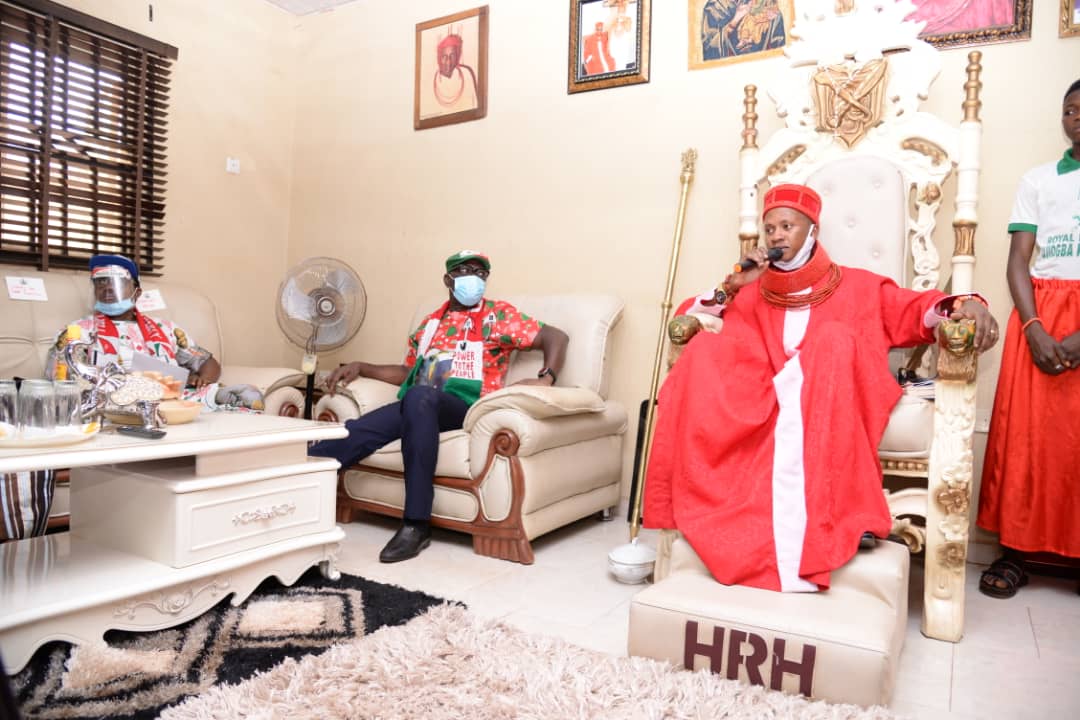 The Onojie of Ujiogba, Solomon Izuware with Governor Obaseki and his running mate, Rt. Hon. Comrade Philip Shaibu, during a courtesy visit to the traditional ruler, in Ujiogba, Esan West LGA, on Friday, August 21, 2020.

The Onojie of Ujiogba, His Royal Highness (HRH), Solomon Izuware, on Friday, assured the candidate of the Peoples Democratic Party (PDP) and Governor of Edo State, Mr. Godwin Obaseki, that his subjects are strongly in support of the governor and would work for his re-election.

Izuware gave the assurance in his palace in Ujiogba, Esan West Local Government Area of the state, and offered royal blessings for the reelection of the governor and his deputy, Rt. Hon. Comrade Philip Shaibu.

The traditional ruler, who listed the various developmental projects executed by the Obaseki-led administration across the state as proof of his sterling performance in office, assured the governor that Ujiogba people would show their appreciation with their votes.

According to him, “I must tell you that I have sampled the opinion of my people and 99.9 percent of them are strongly behind you. We don’t say things we can’t do.

“Ujiogba Community is for you. The people have said it and they have decided to give you their support. I pray for you today that you would be victorious in the forthcoming election.”

The governor said he was happy that the traditional ruler has sampled the opinions of his people ahead of the gubernatorial election.

“As a government, we will continue to do things that our people will benefit from. I have awarded the Ujiogba Road reconstruction. Work will commence during the dry season.

“I understand we don’t have a police station in this community. I am making a commitment that we will build one so that the police don’t have any excuse for not policing your community. I am glad that you have a very well-organised vigilante group which we will continue to support through the community policing framework.”

Meanwhile the Peoples Democratic Party (PDP) has urged eligible voters and party members in Edo State to be vigilant and ensure that their votes count in the governorship election in the state.

Orbih vowed that they will not only mobilise party members and supporters to vote but will ensure that their votes count.

According to him, “Leaders of the All Progressives Congress (APC) said that they want to print ballot papers ahead of the election. If they try it, they will know that Esan people are strong.

“We will not sleep. We are doing everything possible to ensure that you vote and the votes count.”

The Edo PDP campaign chair added: “We will not allow anybody to subvert the will of the people. In this election, we will not only vote but must defend our votes.”

On his part, Obaseki urged members of the party and supporters not to succumb to threats and intimidation, adding that Edo State and Nigeria do not belong to a few people.

The governor who described Edo Central Senatorial District of the state as a PDP enclave, declared that, “Nobody or group of people can take us backward again. This election will remove the godfather in Edo State.”