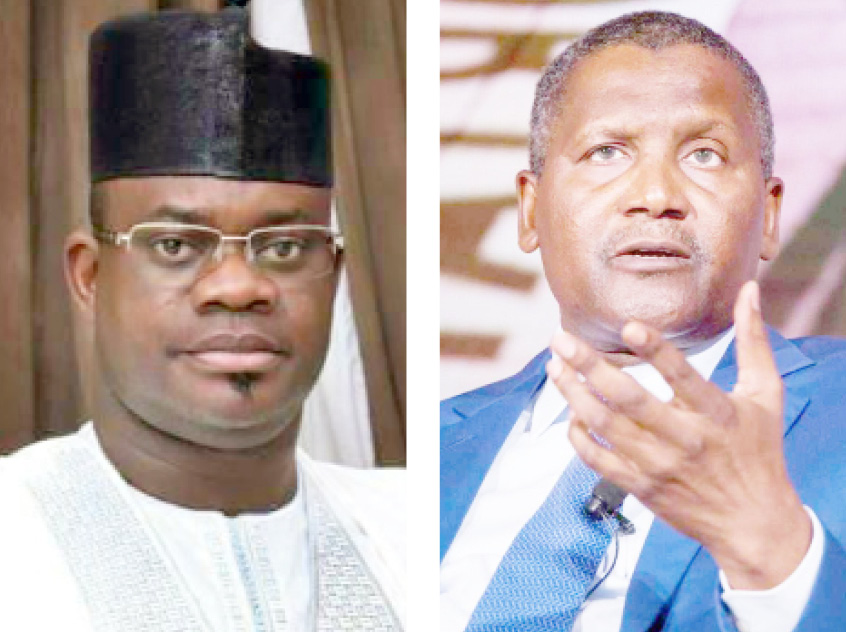 Investigations by Daily Trust have revealed that the management of Dangote Group has concluded plans to approach the court this week over the legality of the Kogi state’s vigilante members who reportedly stormed the Obajana cement factory, where many of the company’s staff were allegedly wounded and the facility shut.

Recall that last week, the Kogi State Government shut down the Obajana factory of Dangote Cement over allegations of tax evasion and unresolved ownership.

A senior management staff of the Dangote Group who confided in our reporter said: “The company is not foolish to have invested that huge sum in constructing four production lines on nothing.

“The question they should ask themselves is, are they the ones who grant mining licenses? So what is the position of the mining office or even the federal ministry of trade?

The source said in addition to the billions of Naira spent on corporate social responsibility in the local community, the company pays over N1billion as PAYE to the government. “So the claim that we owe is false and the evidence is there.”

How it all started

The Kogi State Government, last Thursday, presented to the public, the report of the Specialised Technical Committee on the Evaluation of the Legality of the Alleged Acquisition of Obajana Cement Company Plc by Dangote Cement Company Limited.

The detailed report, submitted to Governor Yahaya Bello, was presented to the public by the Secretary to the State Government, Dr. (Mrs) Folashade Ayoade.

Citing documents, she revealed that the purported transfer of Obajana to Dangote Industries Limited was “invalid, null and void”.

Ayoade disclosed in the report that three Certificates of Occupancy for Obajana Cement Company Plc, which the Kogi State government solely owned at the time, were used to obtain a loan of N63billion by Dangote.

According to her, the committee, in view of its findings, has therefore recommended that Kogi State should take steps to recover the Obajana Cement Company from the Dangote Group.

The committee, chaired by the SSG, also recommended that the “Kogi State government should take steps to recover all accrued dividends from profits made over the years, including accrued interest on the same.

“Kogi State government should take steps to cancel the existing seven Certificates of Occupancy in the name of Dangote Cement Company.”

Stressing the aberration in the arrangement, the SSG said, “Agreement between Kogi State Government of Nigeria and Dangote Industries Limited, dated 30th July 2002 and supplemental agreement dated 14th February 2003, as contained in Exhibit 71 of the Judicial Commission of Inquiry Report, purporting the transfer of Obajana Cement Company Plc to Dangote Industries Limited, are all invalid, null and void.

“There is no evidence of consideration paid by Dangote Industries Limited to the Kogi State government from the alleged transfer of Obajana Cement Company Plc and no dividend was paid to the state from the profits realised from the inception of Dangote Cement Company Plc to date.

“By the assignment of the three Certificates of Occupancy, the title in Obajana Cement Company Plc, still vests in Kogi State government as the sole owner. The three documents were used to obtain a loan of sixty-three billion naira only (63,000,000,000.00) to finance the construction of the cement plant in Obajana.”

In his remarks, Governor Yahaya Bello said that he had taken the bold step, in line with his mandate to safeguard the lives and livelihood of the people of Kogi State, including residents and to ensure their wellbeing.

Bello said this was also coming on the heels of protests by the people of the state who felt they had been suppressed and marginalised by the Dangote Group who had come to rip them off.

The management of Dangote Cement Plc in a swift reaction to the actions of the Kogi State government debunked the claims.

He said: “Vigilantes, led by some officials of the state government were apparently acting on a resolution of the Kogi state House of Assembly on controversial tax claims; claims that the state governor had also contradicted when he said the shutdown was due to an alleged invalid acquisition of the company by Dangote Industries Limited.

In forcefully evicting the workers to enforce the shutdown, the vigilantes shot 27 of our workers and destroyed some of the company’s property at the plant.”

Lawyer and political scientist, Festus Adedayo said: “Questions that further arise on the Kogi government waylay of activities at Obajana are: Does the alleged conversion of the three Obajana Cement Company Plc Certificates of Occupancy to obtain a loan of N63 billion, if it is true, void its ownership?

“If the Folashade Ayoade technical committee recommended that Kogi State should take steps to take over the plant from Dangote, does that recommendation include strong-arm tactics and can it be done outside of the law courts? Since Bello’s Kogi claimed that there was no evidence of consideration paid by Dangote for the acquisition of the Obajana plant, can the Dangote Cement furnish this court of public opinion the same?”

Organised Private Sector (OPS) operators under the aegis of the National Association of Chambers of Commerce, Industries, Mines and Agriculture (NACCIMA) have berated the Kogi State government over the closure of Dangote Cement, Obajana Plant, describing the action as being hasty.

The  Lagos and Abuja branches of the chamber in separate statements described the action of the state governor, Yahaya Bello as “shocking and disappointing” at the least, regretting that for every day the factory is shut, millions of naira are lost and the reputation of Kogi State takes a negative hit.

NACCIMA expressed regret that the issues between the company and the state over tax disputes ought not to have led to the sealing of the company but should have been resolved in a conciliatory and amicable atmosphere.

The body, in a statement signed by its Director-General, Olusola Obadimu and issued in Lagos, said the state government should have trodden a path of caution and called for the immediate reopening of the factory for normal production activities to resume.

Effort to speak to the spokesperson for the Ministry of Mines, Steel and  Development, Mrs Etore Thomas, was not possible as she did not respond the phone calls put to her by our reporter.