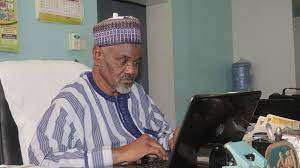 Jikamshi picked the card at his ward in Jikamshi town, headquarters of Jikamshi LGA of Katsina State, with a mini event organised to formally receive him at the ward.

Addressing his supporters, Jikamshi reiterated his position of joining politics to render service to his people in particular and the nation in general.

He said it was on that premise that he helped form the NRM but discovered along the way that the party had either tilted to regional agenda or was just a money-making venture both of which, he said, were not in line with his principles and intent.