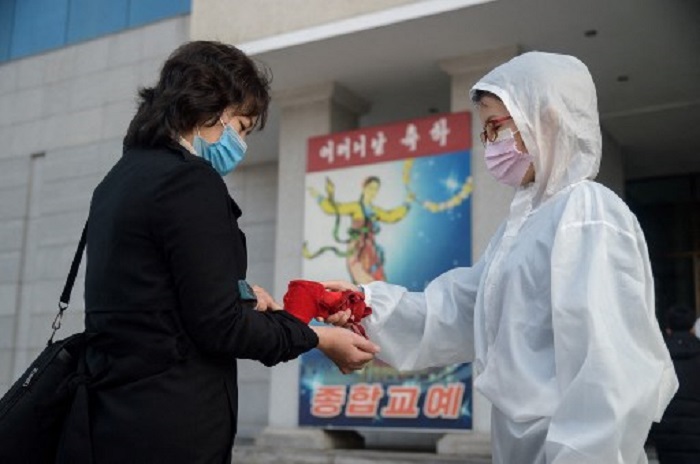 An audience member undergoes a health check as part of preventative measures against the Covid-19 coronavirus, before a performance by the North Korea’s National Acrobatic Troupe at the Pyongyang Circus Theater as part of celebrations marking the annual Mother’s Day public holiday, in Pyongyang on November 16, 2020. (Photo by KIM Won Jin / AFP)

North Korean hackers tried to break into the computer systems of pharmaceutical giant Pfizer in a search for information on a coronavirus vaccine and treatment technology, South Korea’s spy agency said Tuesday, according to reports.

The impoverished, nuclear-armed North has been under self-imposed isolation since closing its borders in January last year to try to protect itself from the virus that first emerged in neighbouring China and has gone on to sweep the world, killing more than two million people.

The National Intelligence Service revealed this information at a closed-door session of the National Assembly’s intelligence committee, the news agency said.

The Gavi vaccine alliance said earlier this month that North Korea had asked for COVID-19 vaccines and was expected to get almost 2 million doses.

Leader Kim Jong Un has repeatedly insisted that the country has had no coronavirus cases, although outside experts doubt those assertions.

And the closure has added to the pressure on its tottering economy from international sanctions imposed over its banned weapons systems, increasing the urgency for Pyongyang to find a way to deal with the disease.

North Korea is known to operate an army of thousands of well-trained hackers who have attacked firms, institutions and researchers in the South and elsewhere.

It is based on technology that uses the synthetic version of a molecule called “messenger RNA” to hack into human cells and effectively turn them into vaccine-making factories.

Pfizer says it expects to potentially deliver up to 2 billion doses in 2021.

The company’s South Korean office did not immediately respond to a request for comment by AFP.

Both it and BioNTech said in December that documents relating to their vaccine were “unlawfully accessed” during a cyberattack on a server at the European Medicines Agency, the EU’s medicine regulator.

The comments came after the Amsterdam-based EMA said it had been the victim of a hacking attack, without specifying when it took place or whether its work on Covid-19 was targeted.

The allegations come only a week after a confidential UN report seen by AFP said North Korea had stolen more than $300 million worth of cryptocurrencies through cyberattacks in recent months to support its weapons programmes.

Financial institutions and exchanges were hacked to generate revenue for Pyongyang’s nuclear and missile development, the document said, with the vast majority of the proceeds coming from two thefts late last year.

Pyongyang’s cyberwarfare abilities first came to global prominence in 2014 when it was accused of hacking into Sony Pictures Entertainment as revenge for “The Interview”, a satirical film that mocked leader Kim.

The attack resulted in the posting of several unreleased movies as well as a vast trove of confidential documents online.

The North is also accused of a huge, $81 million cyber-heist from the Bangladesh Central Bank, as well as the theft of $60 million from Taiwan’s Far Eastern International Bank.

Pyongyang’s hackers were blamed for the 2017 WannaCry global ransomware cyberattack, which infected some 300,000 computers in 150 nations, encrypting user files and demanding hundreds of dollars from their owners for the keys to get them back.

Pyongyang has denied the accusations, saying it has “nothing to do with cyber-attacks”.

Nuclear talks between it and Washington have been stalled since a summit between Kim and then-president Donald Trump in February 2019 broke down over sanctions relief and what Pyongyang would be willing to give up in return.

North Korea showed off several new missiles at military parades in October and last month, when Kim pledged to strengthen his nuclear arsenal.