Just like in previous years, the Nigeria Media Merit Award on Sunday rewarded 50 journalists and/or media organisations at the 2022 edition held in Lagos… 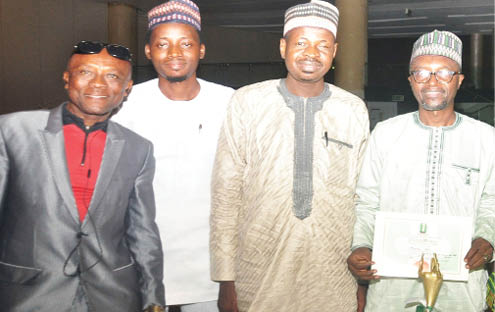 Just like in previous years, the Nigeria Media Merit Award on Sunday rewarded 50 journalists and/or media organisations at the 2022 edition held in Lagos with the theme ‘Projecting Lagos as centre of excellence beyond Africa’.

The 2022 edition, which was also the 30th anniversary of the prestigious award ceremony, reputed for recognising media excellence, also awarded two media icons – Mallam Kabiru Yusuf and High Chief Raymond Dokpesi with the distinguished national leadership award for their dedication to media excellence and service to the nation.

Malam Kabiru, who is the Chairman of Media Trust Limited, publishers of Daily Trust titles, Aminiya as well as owners of Trust TV and Trust Radio, is the President of the Newspaper Proprietors’ Association of Nigeria (NPAN). He is a media professional with over two decades of experience. He worked as the Southern African Correspondent of the British Broadcasting Corporation (BBC), editor at Daily Triumph, Today, and Citizen Magazine among others.

‘Only 1% of medical students request autopsy’

Their water in their hands: Communities take control of water source, safety

The General Editor of Daily Trust, Malam Hamza Idris, won the Editor of the Year award at this year’s award ceremony.

The Punch won the Newspaper of the Year while the Nation bagged the Editorial Writing of the year.

Daily Trust was named the Newspaper of the Year at the 2016 edition of the NMMA. Nasir Lawal Abubakar, who was the editor in 2016, also emerged winner of the Editor of the Year category.

The newspaper is reputable for thought-provoking editorials, ground-breaking news analysis and in-depth reporting.

Ikechukwu Ibe who was nominated for News Photographer of the Year, is a recipient of the Wole Soyinka Photo Journalist of the year for 2015 and 2020.

Editor of the year

Hamza won the coveted Dele Giwa Prize for Editor of the Year ahead of Punch’s Ademola Oni and the Nation’s Adeniyi Adesina.

He joined Media Trust Limited in 2005 as a reporter and researcher and was posted to Yola, Adamawa State and after that to Borno and Yobe states. He became bureau chief in charge of all six states in North East in 2010.

He was redeployed to Daily Trust headquarters in Abuja as Group Politics Editor in 2015. He became the Editor of the Daily Trust in 2019; and was appointed General Editor, handling all three titles: Daily Trust, Daily Trust Saturday and Daily Trust Sunday in 2020.

He also is the lead Anchor of Trust TV’s flagship programme, Daily Politics.

He is a Fellow of the International Centre for Journalists (ICFJ 2013), an alumnus of the Professional Fellows Programme (Washington DC Spring 2013), a Fellow of the Peace Mediation Course (Switzerland, 2015) and a member of the Nigerian Guild of Editors (NGE, 2021).

He obtained a Bachelor of Arts (Hons) Degree in Mass Communications from the University of Maiduguri in 2002 and a Master’s of Science Degree from the National Open University of Nigeria (NOUN) in 2019.

He has co-authored a chapter with the Vice Chancellor of Federal University, Kashere, Gombe State, Professor Umaru A. Pate on the topic, ‘Professionalism and Risk Management: How Journalists Survive while reporting the Boko Haram crisis.’

The paper later became part of the book, ‘Assault on Journalism,’ edited by Ulla Carlsson and Reeta Poythari and published by Nordicom, University of Gothenburg, Sweden in 2017.

He has written over 5000 stories on security issues, politics and policy matters. He has travelled to more than 25 countries, won many awards, participated in many international conferences, and presented papers on many issues of conflict and politics.

Born in Jos, Plateau State, on 27 July 1972, he is from Mai’adua Local Government Area of Katsina State.

While appreciating the Almighty Allah, Hamza dedicated the award to the board, management and staff of the company.

“I am dedicating the award to the board, management and staff. It is not for one person. It is proof of our good work. I am humbled by it and will continue to give my best,” he said.

Meanwhile, Afeez Hanafi, an Editor in the online unit of the newspaper, won three awards at the event.

He won the awards for the stories he did when he was at Punch, which won the Newspaper of The Year at NMMA.

Until March, Hanafi was at his former place of employment.

The Chairman, Panel of Assessors, Mr Dele Adetiba, said 837 entries from 588 applicants for the 50 categories were received.

Meanwhile, Governor Babajide Sanwo-Olu tasked media practitioners to uphold the tenets of journalism, especially ahead of the 2023 elections.

He said journalists must also hold themselves accountable by purging the profession of fake news and other vices.

“Your standard must never be lowered for anything and definitely not in this age, where social media and the internet have enabled the amplification of fake news and malicious reports,” he said.

While paying tribute to journalists for their sacrifice in holding the government accountable, the chairman of the Board of Trustees of the Nigeria Media Merit Award, Dr Haroun Adamu, said the NMMA continues to recognise outstanding media practitioners for the past 30 years.

He said democracy will collapse in any state where free press dies.

Other dignitaries were the Minister of Information and Culture, Alhaji Lai Mohammed, who represented President Muhammadu Buhari; the Senior Special Assistant to the President on Media and Publicity, Mallam Garba Shehu; former Minister of Health, Prince Julius Adelusi-Adeluyi; the Director-General, National Broadcasting Commission, Shehu Ilelah;  and Lagos State Commissioner for Information and Strategy, Mr Gbenga Omotosho, among others.