This year, 2020 was one that began with a lot of promise, hope and aspiration for athletes, journalists and sports administrators just as it was… 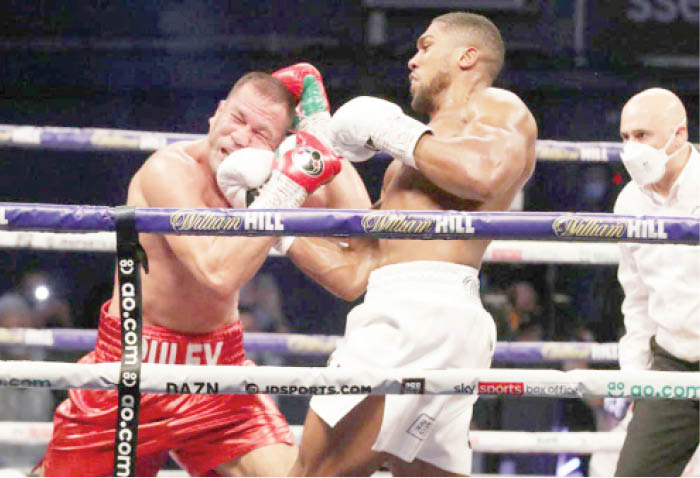 This year, 2020 was one that began with a lot of promise, hope and aspiration for athletes, journalists and sports administrators just as it was for other Nigerians.

This was a year where Nigeria was billed to participate in local, continental and intercontinental competitions such as the Olympic Games, National Sports Festival, amongst other competitions.

All that could not happen following the COVID-19 pandemic across the globe which forced all the sporting events to either be cancelled or postponed.

However, football and boxing are the only sports that were restarted while others like basketball, athletics are still on hold.

But still several Nigerian sports stars have managed to shine.

Here are some of them:

The British-born Nigerian pugilist has won 24 of his 25 professional boxing fights, with no draws, after beating Pulev.

His only defeat came against Andy Ruiz Jr in June 2019, in what was one of the most stunning underdog stories in boxing history.

Osimhen is currently the most-expensive Nigerian footballer in history following his mega move to Napoli.

The 2014 FIFA U-20 Women’s World Cup best player has been in scintillating form for FC Barcelona Femeni after she scored her 29th goal in 30 games for the club she joined in January 2018.

The four-time African Footballer of the Year is a top contender for the Golden Boot this season following her sharpness in front of goal.

She has already won the Copa Catalunya and Spanish Supercopa Feminino with Barça, with her goal against Atlético in the semi-final proving to be the match-winner.

Popularly known as ‘Style Bender’ is a professional mixed martial artist currently signed to the Ultimate Fighting Championship (UFC) where he is the Middleweight Champion and has a record of 20 wins and no losses.

He is widely regarded as one of the best strikers in the world of mixed martial arts.

Wilfred Ndidi has been the most consistent and one of the best Nigeria footballers in the last five years since he joined Leicester City in January 2017.

The Super Eagles midfield marshal is regarded as one of the best players in his position in the world, not just Nigeria, with his elite ball-winning abilities and when he got injured, the national team and his club massively felt his absence.

Nwora is among the eight Nigerian players recently drafted by Milwaukee Bucks into the National Basketball Association (NBA).

He is the son of former D’Tigers coach, Jordan Nwora who had helmed the Nigerian national basketball team before former NBA head coach Mike Brown recently took over the reins.

Jordan, in fact, made his debut with the senior team during the qualifiers leading up to the 2019 FIBA World Cup.

Just like Nwora, Achiunwa was selected with the 20th pick in the 2020 NBA draft by the Miami Heat.

He played college basketball for the Memphis Tigers.

He finished his high school career at Montverde Academy in Montverde, Florida and was a consensus five-star recruit and McDonald’s All-American.

Aribo committed to play for the Super Eagles and made his debut in October 2019 and since then, he has been one of the most consistent Nigerian players out there.

Ajayi is currently the most consistent Nigerian defender in 2020.

Starting from the previous year, Ajayi had a solid season for West Brom who secured promotion to the Premier League.

Born in Belgium, the footballer opted to play for Nigeria and got his debut in a friendly 1-1 tie with Tunisia on 13 October 2020.

Onyeka received his first call-up for the Nigerian national team on 22 September, 2020 for the friendly matches against Algeria and Tunisia in Austria on 5 and 9 October 2020, respectively but made his debut with the Super Eagles in a friendly 1-0 loss to Algeria on 9 October 2020.

A late bloomer who came into prominence in the latter part of 2020, but the left back has been fantastic all through the year.

In 2020, he also made his debut for the Super Eagles and has quickly established himself as the first choice in the left back role.

The German-born Nigerian struggled for game time in the Premier League with Brighton but rediscovered his form when he joined Scottish side Rangers in the summer and has been a key player.

He has also been involved in all Super Eagles games in 2020.

The former captain of the German U-20 team switched his allegiance to Nigeria and made his debut with the Nigerian national team in a friendly 1–0 loss over Algeria on 9 October 2020.

The Torino loanee won the Premier League Goal of the Month award for November 2020 and is the first player with a Nigerian passport to win the prestigious accolade since the award was introduced in the 2016-2017 season.

Udoka Azubuike was drafted by Utah Jazz while Precious Achiunwa was also drafted by the Heat.

American-born Isaac Okoro was drafted by Cleveland Cavaliers while Onyeka Okongwu and Zeke Nnaji were drafted by the Atlanta Hawks and the Denver Nuggets respectively.

Daniel Oturu was drafted by the Timberwolves, but could be traded to the Knicks and Desmond Bane joined Boston Celtic.