Nigerians, others panic as earthquake shakes Bali in Indonesia

Participants at the ongoing World Bank/IMF meeting in Bali, Indonesia, including Nigerians were in panic mood when an earthquake shook the area today. Our reporter,… 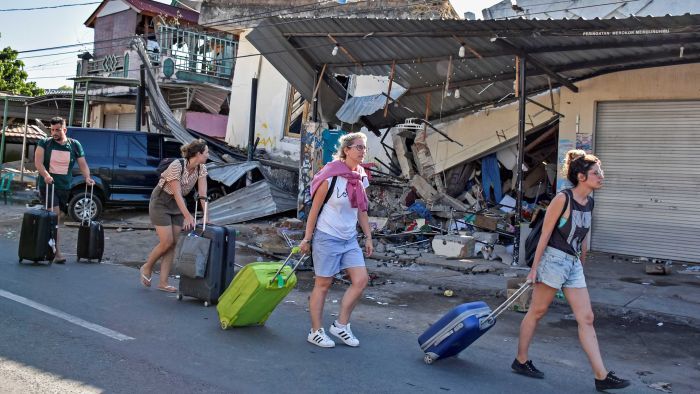 By Sunday Michael Ogwu, who is in Bali, Indonesia

Participants at the ongoing World Bank/IMF meeting in Bali, Indonesia, including Nigerians were in panic mood when an earthquake shook the area today.

Our reporter, who was among the participants, reported that around 2:30am on Thursday in Denpasar, Bali time, (7:30 pm, Wednesday, Nigerian Time), another Nigerian participant, Temple Asaju of Channels Television, woke him up to notice that everything in the room was seriously shaking.

“We immediately went to the lobby and discovered everyone was headed to the assembly point of Ion Benoa Hotel in Nusa Bali.

“The island has experience a very heavy earth tremor arising from a 6.1 magnitude earthquake in Gempa, about 84 kilometres  from our location in Bali, venue of the annual general meeting in Indonesia,” he narrated.

The hotel staff named Artha, later explain that, “there was no need for panic as we are far from the epicenter of the earthquake and therefore no real damage can get to us.”

It will be recalled that a 6.9 earthquake magnitude rattled Lombok on Sunday evening, following a similar earthquake activity of  7.0 earthquake that struck the Indonesian island on August 5, according to Indonesia’s Meteorology, Climatology and Geophysics Agency (BMKG).

“The meteorology agency of Indonesia has assured that we were save,” he said.

“The hotel staff further hinted that the hotel is fitted with an earthquake alarm adding that we are expected to move to the roof of the hotel and not assembling on the groundfloor, as most of us, visitors, and mostly participants to the IMF/World Bank meetings did,” our reporter said.

According to him, the earth-shake lasted for about 5 to 10 minutes as most people in the hotel and surrounding ones too gathered outside.

He reported that the situation is now calm, adding “we hope to get further information by morning.”

A number of top Nigerian Goverment officials including the Finance minister, Aisha Ahmed, Budget minister, Udoma Udo Udoma, and the Central Bank Governor, Godwin Emefiele are already in town for the annual meeting.