Three Nigerian migrants rescued in Spain’s Canary Islands, after an 11-day journey from Nigeria crouched on the rudder of a fuel tanker, have been rescued.… 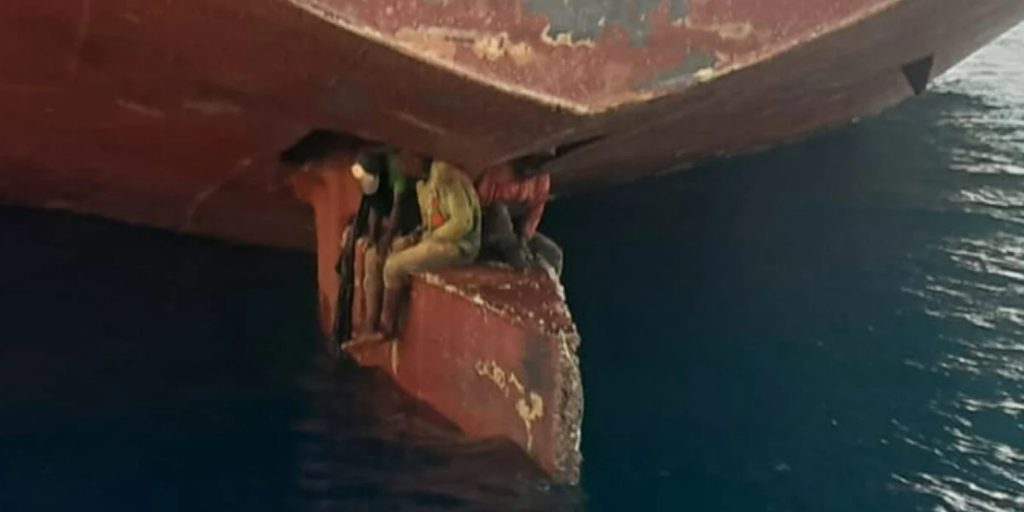 Three Nigerian migrants rescued in Spain’s Canary Islands, after an 11-day journey from Nigeria crouched on the rudder of a fuel tanker, have been rescued.

A spokesman for Spanish Police said they should be returned home under stowaway laws.

In a photograph distributed on Twitter by the Spanish coast guard, the three stowaways were shown crouching on the rudder under the hull, just above the waterline of the Alithini II.

The 183-metre ship, sailing under a Maltese flag, arrived in Las Palmas in Gran Canaria after setting out from Lagos in Nigeria on November 17, and navigating up the West African coast, according to Marine Traffic.

How Nigerian stowaways thrown into high sea were rescued in Liberia

The ship’s captain confirmed to the Red Cross that the ship had sailed from Nigeria 11 days earlier.

A Canary Islands police spokesperson said it was up to the ship’s operator to take care of stowaways, provide them with temporary accommodation and return them to their origin as soon as possible.

However, Helena Maleno, director of migration of the non-governmental organisation Walking Borders, said the migrants may be able to remain in Spain if they claim asylum.

“On several previous occasions, stowaways were able to remain in Spain with political asylum,” Maleno said.

Alithini II, which is owned by Gardenia Shiptrade SA, is managed by Athens-based Astra Ship Management, according to public shipping database Equasis.

The coast guard said the migrants were rescued by a coast guard vessel at about 7 p.m. local time (1900 GMT) on Monday.

The Canary Islands emergency services and the Red Cross said the stowaways were being treated for moderate dehydration and hypothermia.

One of the migrants was in a more serious state and had to be taken to a different hospital on the island. (Reuters/NAN)