Benjamin Atonko is a journalist and the author of ‘Bleeding Roads.’ He shares what informed his decision to write the book and why Nigerian roads… 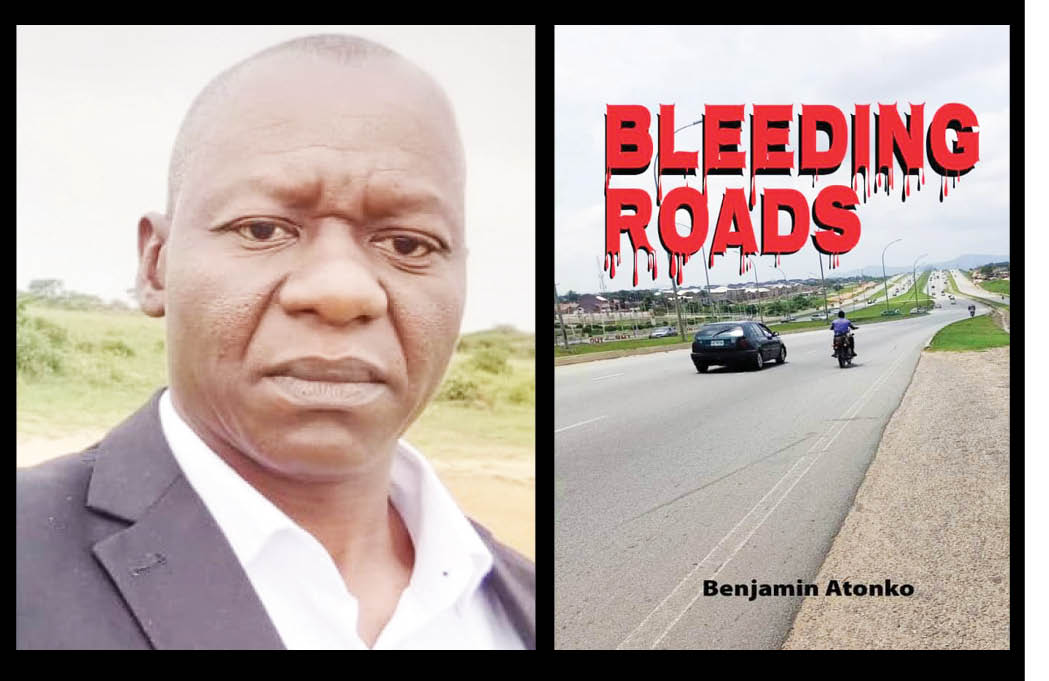 Benjamin Atonko is a journalist and the author of ‘Bleeding Roads.’ He shares what informed his decision to write the book and why Nigerian roads bleed. Excerpts:

What informed your decision to write this book?

It is a deep feeling. It just dawned on me to do it. This feeling arose from happenings around me. My boss – Hon Justice Monica Dongban-Mensem, made me see the need to be involved and be passionate about road safety after she lost her first son in a road incident. Prince Dongban was knocked down by an unknown motorist in Jos, Plateau State. He bled and bled – no rescue! This was in the heart of the city. Passers-by bothered with the matter became helpless because they could not produce the requisite Police Report. This made us to ponder on the kind of rescue system we have here. Also, a young man who we invited to take up a job, Mr. Geoffrey Jirbo, left my house on a night journey to Lagos to report at his duty post. He died in a crash around Ilesa, Osun State. I was terribly devastated. Every time I remember him, I ask, should I not have asked him to go for the job?

The third one is my involvement in road traffic crashes. Twice, I have come out of it without serious injuries. The main thing however that got me to write was the United Nations’ theme for World Day of Remembrance 2018. In that year, the theme was ‘Roads Have Stories.’ What this implies is that roads are not only for getting to destinations. They have become permanent resting place for many. Someone leaves their family on a journey – in a short while, a phone call is put across that the person has been killed in a road traffic crash. I took it upon myself to tell the stories of the roads. This book is one of the ways I am telling the stories of the roads.

How is this book relevant to Nigerians?

Hard as we try to prevent crashes, they do always occur. It is happening now somewhere on a Nigerian road. Nigeria government says 5,000 people die from road traffic crashes every year. The United Nations’ figure is far more than this because Nigeria gives numbers of those dead immediately after the crash has occurred. The United Nations does a follow up to record deaths even after three months of a particular road traffic crash.

‘Bleeding Roads’ presents to us the kind of rescue system we have in our country. The Federal Road Safety Corps (FRSC) which mandate is to do emergency rescue has only 51 ambulances, supposedly covering a road network of 204,000 kilometres. This is very poor. In this age, accident victims are evacuated in open vehicles. This is inappropriate and unsightly.

This book, therefore, is a clarion call to Nigerians to look seriously and deeply into emergency rescue. It’s good to dwell on the prevention of road traffic crashes but what about when they happen? They frequently happen anyway.

With a good emergency rescue system, many will be saved. It can happen to any of us. Failure to take action is tantamount to putting oneself in danger because nobody knows when and how it will happen. Even if you fly on aeroplanes, that short distance you are to ply the road maybe when it will happen.

Why dwell on the road sector?

Chukwuma Soludo said 80 per cent of African urban dwellers cannot afford a car, yet transport development is car-centric, and they must move. The Nigerian Society of Engineers (NSE) says roads account for 90 per cent of all freight and passenger movement, yet a vast majority of roads are poorly maintained. Some of the roads are abandoned.

As important as the road is, for a long time, the road sector was not given adequate attention due to the huge investments it needs. Coupled with the neglect of alternative transport modes, especially railways and waterways, too much pressure is exerted on the Nigerian roads.

The consequence of this is roads crumbling earlier than their lifespans. There is much chaos on the roads — too many vehicles including long monstrous vehicles intermingling with cars and pedestrians. This has given rise to incidents of road traffic crashes.

NSE, in its infrastructure scorecards in 2015 and 2017, rated Nigerian roads and bridges very poor – unfit for purpose and constitute a danger to public safety. Chapter 2 of my book exposes the state of the Nigerian roads, with the hope that government will give more consideration to this very critical infrastructure for the safety of the people.

What did you discover about Nigerian roads?

Nigerian roads are bad. They are bleeding profusely. There is no pleasure plying the Nigerian roads. Failing portions, unending construction works, indiscriminate erection of checkpoints which become extortion points and of course, banditry that has crept in now have made riding on the road a nightmare. Roads in this part of the world have become life-taking infrastructure. Some Trunk A roads like those leading to airports are good. However, the majority of Trunks B and C roads are poorly built. They are not of international standards and so are eroded not long after they were constructed. Motorists dodging potholes and bad portions often collide or flip the vehicles, causing serious injuries and deaths.

What are the things you hope the book will address?

Chapter 12 gives what needs to be done for better road use in Nigeria. It advocates the deployment of forensic skills in investigating road traffic crashes so that the actual causes of road traffic crashes are established. After a proper and thorough investigation, those found to have done wrong should be prosecuted. Those who suffer unjustly should be compensated and there should be an enlightenment programme so that lessons are learnt from every incident. The opaque Motor Vehicle Insurance system should be made transparent. Nigeria’s Emergency Medical Service which has remained a mere paper work should be revved up and launched so it takes full effect. This will give more meaning to post-crash management. Of course, there should be road discipline.

What do you think Nigerians can do differently to reduce road deaths?

Reducing road traffic crashes is simply looking at the causes of the problem and adequately dealing with them. The Nigerian government must improve the condition of roads. Road users must imbibe appropriate road use behaviour and emergency care needs to be better. An emergency system that depends on the Good Samaritan is no good.

What are people’s views, reactions to Bleeding Roads?

I would say the general attitude to this book is very positive. The title of the book alone excites me. Many have thanked me for choosing to write on a topic that is of great concern.

What is next after Bleeding Roads?

I want Bleeding Roads to give a fillip to the road safety campaign. Its impact will spur me to do further research into road safety.