Nigerian lawyers have criticised the U.S. legislation seeking to protect human rights in Hong Kong amidst crackdown on pro-democracy protests in the China-ruled city. The… 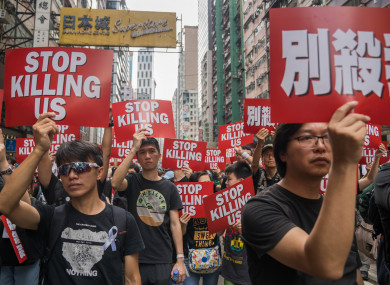 Nigerian lawyers have criticised the U.S. legislation seeking to protect human rights in Hong Kong amidst crackdown on pro-democracy protests in the China-ruled city.

The U.S. Senate, in a unanimous vote last week had passed the “Hong Kong Human Rights and Democracy Act”, which would be harmonised with that passed by the House of Representatives before presenting it to President Donald Trump for assent.

The Senate passed a second bill, also unanimously, that would ban the export of certain crowd-control munitions to Hong Kong police forces. It bans the export of items such as tear gas, pepper spray, rubber bullets and stun guns.

Reacting to the issue, E.M.D. Umukoro Esq said the legislation by U.S. on a domestic affair of China was an infringement of the country’s sovereignty

“Sovereignty is the power or capacity to make laws for the said country to govern herself. No country has the capacity to legislate over the internal affairs of another country,” he said.

Also reacting, Obioma Ezenwobodo Esq.said the action of the US lawmakers is beyond their jurisdiction and is therefore “a breach of sovereignty of another nation.”