Nigerian internet sensations and where they are now

It is often said that when opportunity meets preparation, it leads to success. With the emergence of social media in Nigeria, some citizens have had… 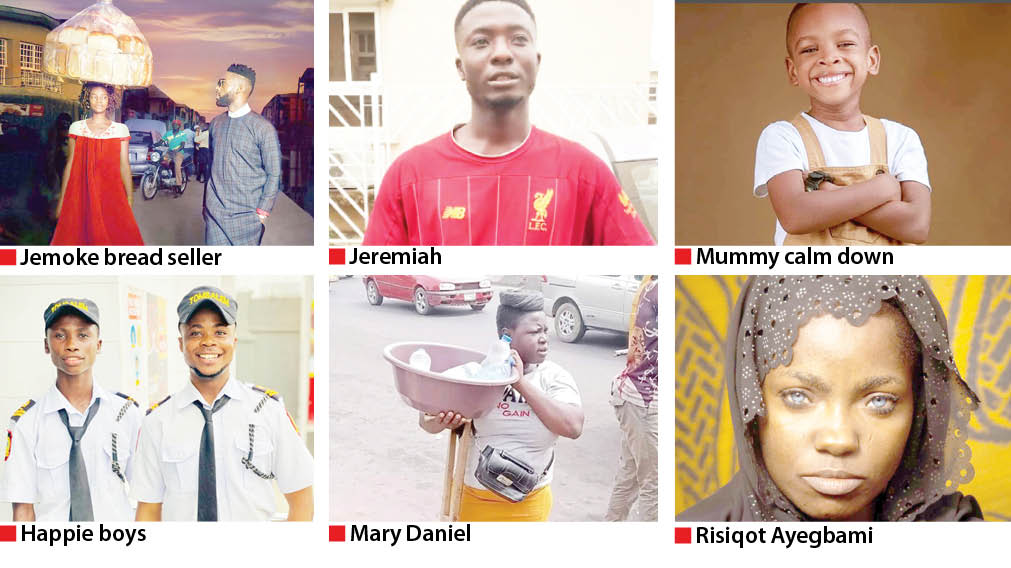 It is often said that when opportunity meets preparation, it leads to success. With the emergence of social media in Nigeria, some citizens have had the opportunity to knock at their door and when the limelight shone on them, they did their best to utilise that opportunity. Daily Trust highlights some ordinary Nigerians who became internet sensations and caught the attention of Nigerians.

Jumoke rose to fame after a remarkable makeover that turned her from grass to grace. She became a topic of discussion even on a global scale.  Her fortune grew once she began receiving endorsement deals, modelling contracts, tours, and scholarships.

However, the model’s crisis started when she experienced conflict with Sunday Orisagunna, the father of her children.  He claimed that once fame and wealth found her, she turned rude. Her once-vibrant modelling career also had some setbacks.

Since then, Jumoke has disappeared from the public arena. Additionally, the mother of two deleted all of her social media accounts. Her latest update on them was in 2019, with the exception of her Facebook page, which was updated in 2020.

In 2020, a young woman visiting Ilorin for the Eid celebrations came across two sisters with blue eyes named Kaosarat and Hassanat. She later found out that their mother, Risiqot Ayegbami, shared the same distinctive quality. It didn’t take long for their photographs to go viral on social media, especially once she discovered that their father had deserted them as a result of their distinct blue eyes.

Their lives improved after a well-known photographer, Mofe Bamuyiwa, captured some beautiful images of the unusual family. The first lady of Kwara State, Olufolake Abdulrazaq, and the wife of former Senate president, Toyin Saraki, also intervened by providing the initial cash contribution of N250,000 each for the family’s maintenance. In keeping with her goodwill, she declared a scholarship for the two kids’ admission at Roemichs International School.

Risiqot’s husband quickly changed his mind and decided to stay with the family as a result of the favourable attention they received.

Mary Daniel, an amputee, drew the attention of Nigerians after a young man observed her hawking “satchet water” on the streets of Oshodi despite her disability. She rose to fame on social media in the blink of an eye.

Mary stated throughout multiple interviews that she had her leg amputated as a result of a horrific vehicle accident that killed her parents when she was a little child. She stated that the incident forced her to leave school in order to support her infant and her elderly grandma.

Her predicament prompted numerous Nigerians to donate to her, and the state government even granted her temporary shelter. She commissioned a N17.5m building purchased with donations from generous individuals both inside and outside Nigeria. She has finished building a sachet water plant on the property.

Oreofeoluwa Lawal aka Mummy Calm down

Oreofeoluwa Lawal became a Twitter phenomenon in 2020 after a video of him pleading with his mother to stop beating him for anything he had done wrong went viral.

The four-year-old and his mother, Toluige Olokoobi Babalola, had no idea that the video would become popular and draw the attention of Governor Babajide Sanwo-Olu of Lagos State.

Young Lawal made his Nollywood debut after that popular video when he landed a cameo part in Kunle Afolayan’s film ‘Swallow’. He now has a social media account where he keeps his followers up to date on his whereabouts.

In January 2022, Ekuma Jeremiah, a hawker who distributes bottled water in Lagos State became an internet star well above his dreams. Jeremiah was seen handing money to various prisoners inside the Nigerian Correctional Service (NCS) vehicle in a viral video that was captured by a driver named Emmanuel Ojo.

Many Nigerians were shocked by the water vendor’s decision to donate to the convicts from the meagre profits from his trade.

Billionaire businessman Obi Cubana offered him a scholarship and a monthly income of N100,000. He was accompanied to pick up his admission letter by Daddy Freeze and Obi Cubana. Jeremiah is now a student at the Ebonyi State University, pursuing his first degree in law.

On March 3, 2022, the video of two security guards at a Chicken Republic outlet dancing wildly went viral online. The security guards, known as The Happy Boys, were seen dancing to Pheelz and Buju’s club song, Finesse, in the video.

While everyone enjoyed watching them dance, a rumour circulated that they had lost their jobs as security guards. In a formal statement, Chicken Republic refuted allegations that they had been sacked.

According to a statement put on their official Instagram account, the two security guards in the video work for a private security business.

However, the General Overseer of Omega Power Ministries, Chibuzor Chinyere, provided them with financial aid. Caleb, the young man who created the popular video, received a scholarship. They also received employment offers from the Special Assistant to Delta State Governor, Ossai Ovie Success.