The Nigerian entertainment industry has gone global and there is no stopping it. Nigerian music and movies have gained much global popularity, so much so… 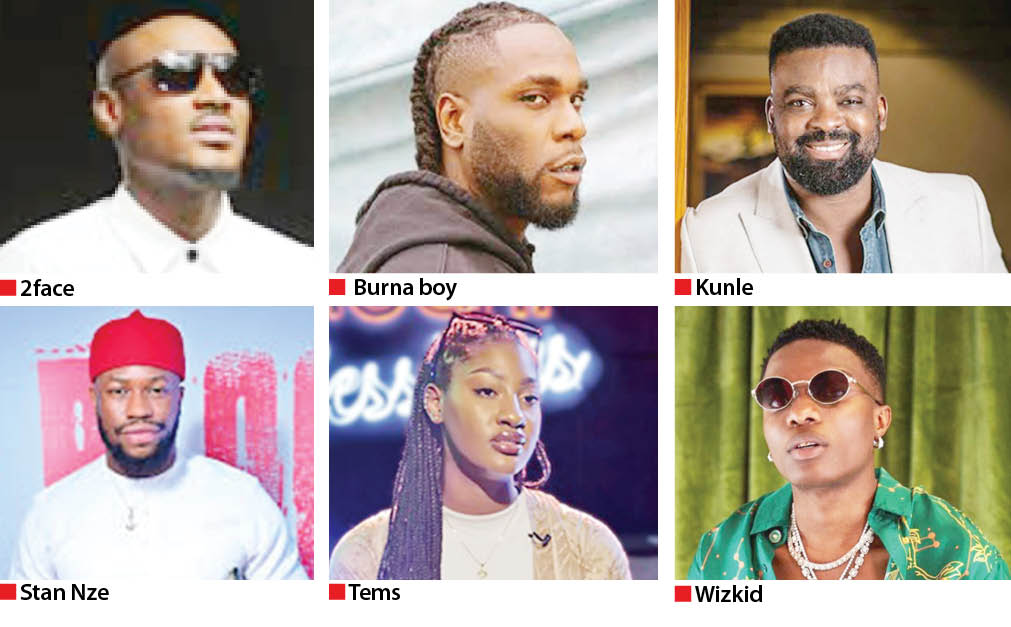 In the African music industry, Burna Boy is undoubtedly one of the most well-known names. Within Africa and on the global stage, the African giant has enjoyed extreme success. In his career as an artiste, Burna Boy has received eight worldwide nominations. However, out of the eight nominations he earned, he has won six foreign awards. Burna Boy’s first significant international honour came from the BET Awards, where he won in 2019 and 2020 for Best International Act. At the 2019 MTV Europe Music Awards, Burna Boy was named Best African Act. Burna Boy also received his first Grammy Award for Best Global Music Album for his timeless masterpiece titled ‘Twice As Tall.’

Wizkid is another Nigerian musician that has received numerous international accolades. He is the African with the most Bet Awards nominations. In 2012, Wizkid won a Bet Award in the category of Best International Act: Africa. Additionally, Wizkid shared the 2021 Grammy Award for Best Music Video with Beyonce, Blue Ivy, and SAINt JHN for Beyonce’s smash single from the album, Brown Skin Girl. At the 2021 Soul Train Music Awards, he and TEMs received the soul train “Best Collaboration” in honour for their song “Essence.”

The DMW CEO has won several honours and is recognised as one of the most successful African musicians ever. He received the KORA Awards’ Best Male Newcomer honour in 2012. He received awards from BET for Best International Act: Africa and MTV for Best Male West Africa Artist of the Year in 2014. He also has been nominated for the soul train and MOBO awards.

Rising Nigerian artist TEMS, a, won Best Collaboration at the Bet Awards 2022 alongside Wizkid and Justin Bieber. They received recognition for their remix of Wizkid’s Essence from his 2020 album Made in Lagos. The song was already popular in Nigeria, but the collaboration gave it greater notoriety and allowed it to enter the Top 10 Hot R&B/Hip-Hop Songs chart on Billboard. TEMS and Wizkid also took home the “Best Collaboration” award at the 2021 Soul Train Music Awards. TEMS is additionally the first female musician from Nigeria to take home a Bet Award in this category.

Late Nigerian singer and songwriter Fela Kuti received numerous honours during his lifetime. He currently has a record for posthumous honours, including the Channel O Music Video Awards. Fela was recognised as the first Nigerian or African to receive the DSTV award when it was first awarded out in 2003.

In 2005, 2Face received the MTV Europe Music Award “Best African act”. He was also the first African to receive the award as the category was introduced that year.  Without a question, 2Face was and continues to be a major player in the Nigerian music scene at the time. He has also won other international awards such as BET Award, MOBO Award, Channel O Music Video Awards, and more.

Popular Nigerian artiste D’Banj is renowned for his noteworthy contributions to the music industry, including being the first person from Nigeria to get a BET Award. In 2011, D’Banj and 2Face shared the Bet Award for Best International Act: Africa. It was the same year that this award category began. The 11-year-old win makes the duo the first Nigerian and African artists to win the prize. This accomplishment helped Nigeria surpass other nations in terms of the popularity of its music around the world.

For his performance in Play Network Studios’ adaptation of “Rattlesnake,” Nollywood actor Stan Nze won his first international prize. The actor won the Septimius award in Amsterdam, Netherlands, for “Best African Actor.” Seven other performers from South Africa and Nigeria, including Thabo Rametsi of Netflix’s “Silverton Siege,” were nominated with Stan Nze. The Ramsey Nouah-directed and Play Network Studios-produced film Rattlesnake: The Ahanna Story won the prize for the actor’s depiction of the main protagonist.

Popular actor Lateef Adedimeji won an international prize in the United States for his leading part in the prominent film “Ayinla.” The declaration was made at the Hollywood and African Prestigious Awards (HAPA). Alongside Ramsey Nouah and Etinosa Idemudia, the actor celebrated winning an award for “Best Actor” in a Motion Picture for his lead role in “Ayinla,” which he said brought him great delight after he had prayed for a cameo role in one of Tunde Kelani’s movies.

In 2022, Kunle Afolayan’s Nollywood film “Citation” won the Best International Film award at the National Film Festival (NFF) in the UK. According to the director, he was shocked by the award because there had been no lobbying and it had been earned. The award was accepted by the film’s lead actors, Jimmy Jean Louis and Temi Otedola.