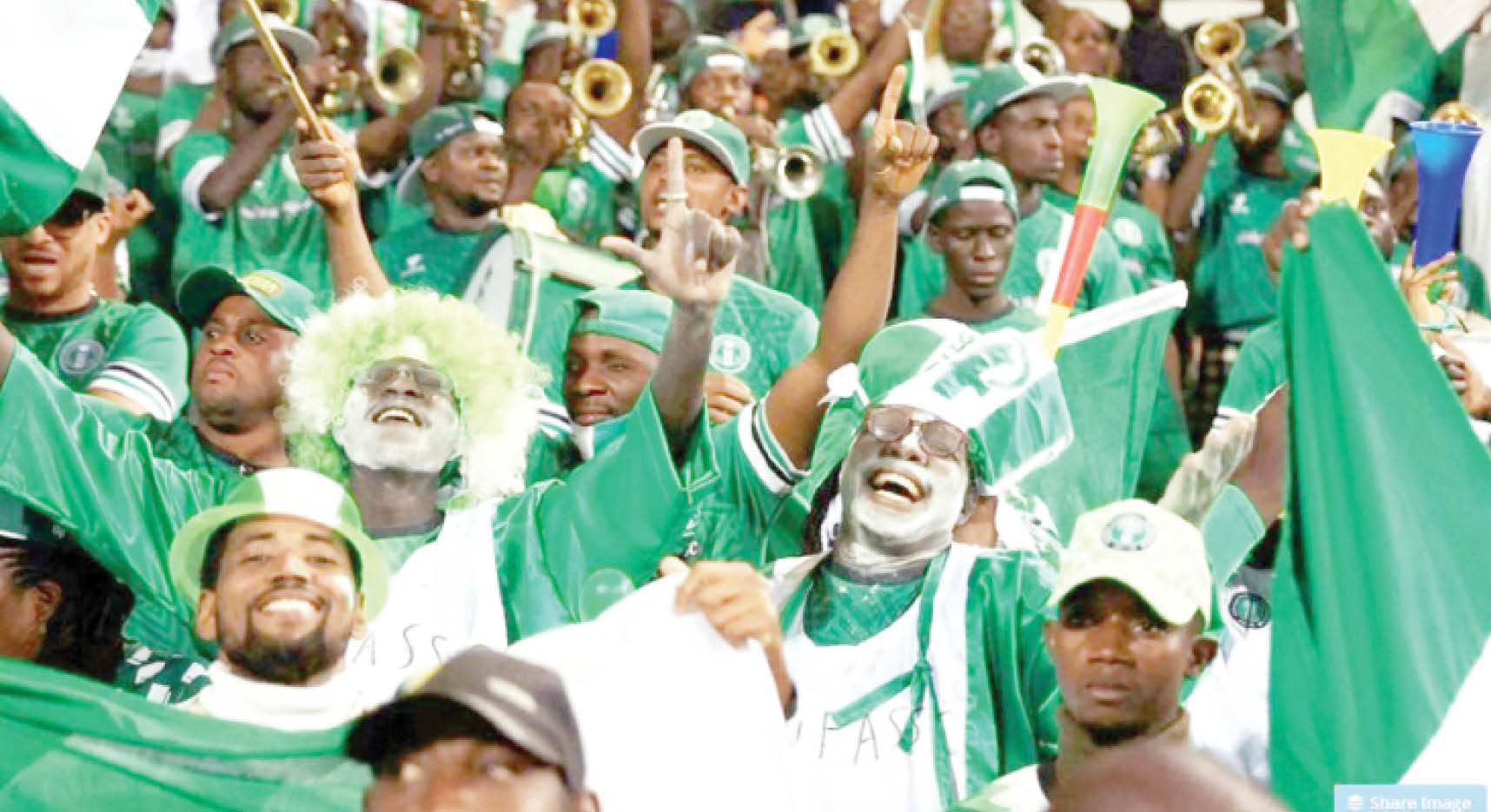 Nigeria supporters in Garoua celebrate qualifying for the second round of the Africa Cup of Nations. AFP

The stage is set for one of the oldest rivalries in African football when the Super Eagles of Nigeria battle for the sole Qatar 2022 World Cup ticket against the Black Stars of Ghana.

The rivalry between both nations dates back to 16th October 1950 in a friendly match in which Gold Coast as Ghana was known then defeated Nigeria. Since then, 55 more matches in all competitions have been played.

Out of the 56 games played according to the record books, Ghana has the bragging rights having won 25 and drew 19, leaving Nigeria to win 12 games.

The first leg of the playoff will be played in the Cape Coast Stadium on Wednesday, 23rd March or Thursday, 24th March while the reverse fixture which will be the 59th clash at senior level between both West African giants in a chequered 71 –year rivalry will take place at the renovated MKO Abiola National Stadium, Abuja on March 27.

Nigeria are seeking to qualify for the World Cup a seventh time and, since 1994 and have missed only one of seven editions. The last of three appearances by Ghana was in 2014.

The build-up to this all-important clash has seen both the Nigeria Football Federation (NFF) and the Ghana Football Association (GFA) announcing shakeups in their technical crews.

The NFF, in a statement issued recently to name the personnel that will lead the Eagles to the playoff next month.

The last captain so far to win the Nations Cup, Joseph Yobo is the 3rd Assistant while Alloy Agu is the goalkeepers’ trainer.

Reacting to the appointment, the Eguavoen said Amuneke would be a great addition to the Super Eagles’ coaching team.

“Amuneke is my younger brother and we have worked together for so long. I think he’s coming into the team will add a lot of value also.

“Once we get information on a player, I will go round to watch him. And not just me, a couple of my colleagues are also watching.

“That gives the home-based players a lot of hope and thinking that they will get a chance one day to play in the Super Eagles.”

In the same vein, the GFA officially announced the appointment of Otto Addo as the interim Black Stars coach for the crucial two-legged tie.

As revealed by the GFA, the Borussia Dortmund talent development coach will be supported by the former Norwich City and Brighton & Hove Albion manager, Chris Hughton, who will act as the new technical advisor to the new technical team.

Both Addo and Hughton have been the frontline names to take over the Black Stars coaching role since the dismissal of Milovan Rajevac after a dismal outing at the Africa Cup of Nations, where Ghana crashed out in the first round after finishing bottom of their group.

As part of efforts to ensure Ghana make a return to the global showpiece following failure to make Russia 2018., former Bayern Munich defender Samuel Osei Kuffour and King Faisal president Alhaji Karim Grusah were also drafted in by the GFA to support the management committee.

In the famous quote of former Manchester United legendary coach, Alex Ferguson who said “Attack wins you games, defense wins you titles and this is very apt in the bold moves by the NFF to win the two-legged games.

Ahead of the clash, the NFF president, Amaju Pinnick on Twitter said Odion Ighalo has assured of his availability to be part of the Super Eagles squad.

“I just met with @ighalojude, the highest goalscorer at the 2019 edition of the AFCON, now playing and still scoring goals for Saudi Arabia’s biggest football club.

“Odion has assured that playing for his country will always come first and he is ready to ensure that we do play at this year’s @FIFAWorldCup in Qatar,” Pinnick tweeted.

Prior to this, the NFF also confirmed it has received FIFA’s approval, which allows Leicester City’s Ademola Lookman to switch his international allegiance from England.

“The request made by the NFF – Nigeria Football Federation for a change of association of the player Ademola Olajide Lookman is accepted.

“The player Ademola Olajide Lookman is eligible to play for the representative teams of the NFF – Nigeria Football Federation with immediate effect,” Emilio Garcia Silveiro, who is FIFA’s Chief Legal and Compliance Officer said.

As the clock ticks for the epic battle, it is hoped by Nigerian football supporters that the Super Eagles will dim the Black Stars to emerge the aggregate winners over both legs earn a ticket to represent Africa at the World Cup in Qatar.