At 2am on March 28th 2022, Olanrewaju Suraju, the head of the Human and Environmental Development Agency (HEDA), was asleep beside his wife in their… 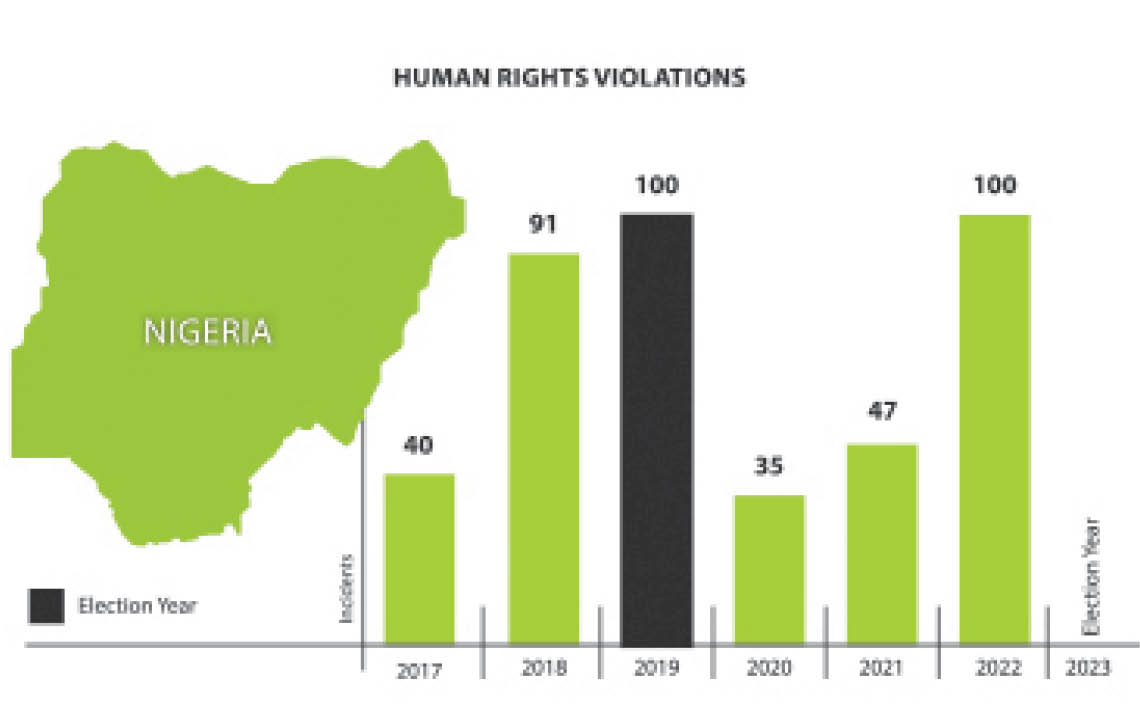 At 2am on March 28th 2022, Olanrewaju Suraju, the head of the Human and Environmental Development Agency (HEDA), was asleep beside his wife in their bedroom in Abuja when they suddenly found themselves under attack by men who had broken into the house. The men, who made off with laptops, mobile phones, and cash, could have been mistaken for ordinary criminals were it not for the fact that they mysteriously told the couple that they were ‘acting on information and instruction.’

Nigerian burglars recently appear to have developed a taste for targeting social justice activists. Houses are robbed, but the thieves also make a point of severely beating their victims too. Suraju, an activist whose organisation is involved in a long-running battle with the Ministry of Justice over corruption involving one of Nigeria’s rich oil blocks, was a very vocal activist. The attack against him and his wife was so vicious that it left both of them in the hospital.

One month before the attack on the Suraju family, plain-clothed thugs had attacked activists on their way to a court hearing. Again victims were severely beaten and their phones and money were stolen. A month before that, a similar group targeted Omoyele Sowore, initiator of the protest movement ‘RevolutionNow’ and publisher of the critical online news site Sahara Reporters. He was also on his way to a court case. Afterwards, Sowore said, a source in the State Security Services (SSS) had told him that the attack had been ordered by them. He also recalled that the same men had attacked him during a scuffle at an earlier protest, while SSS operatives and police had prevented his escape.

Deji Adeyanju, an associate of Sowore who was himself once beaten so badly by vigilantes during a peaceful protest that he was hospitalised in a life-threatening condition, also says that sources in the SSS confirmed that the agency is behind the attacks. ‘They alerted us before the attack on us that one “Ali from Kano” was “leading a mob” towards us. As they were beating us, I mentioned this name, and it seemed to shake them, as if their secret had been exposed. Intelligence operatives in Nigeria now, whenever they can’t come out against anti-government elements openly, they hire thugs who go after them, both online and offline,’ says Adeyanju. ‘The leadership of this SSS goes after civil society instead of gathering intelligence on Boko Haram.’

Why it has been difficult to revive groundnut pyramids

Though Adeyanju formally reported the assault to the Inspector General of Police in December 2019, the police authorities have yet to make any arrests or publish an investigative report on the case. The same is true for the attack on Olanrewaju Suraju and his wife. ‘The police showed no interest at all’, Suraju says, ‘even when we tracked one of my phones, which was activated by the assailants and gave details of its location. The same authorities who use thugs to attack activists are in firm control of even institutions where victims are supposed to seek redress.’ In a joint statement about the attack, five prominent Nigerian organisations active in the fields of human rights, transparency, anti-corruption and media stated their belief that the attack was aimed at stopping Suraju’s activism. 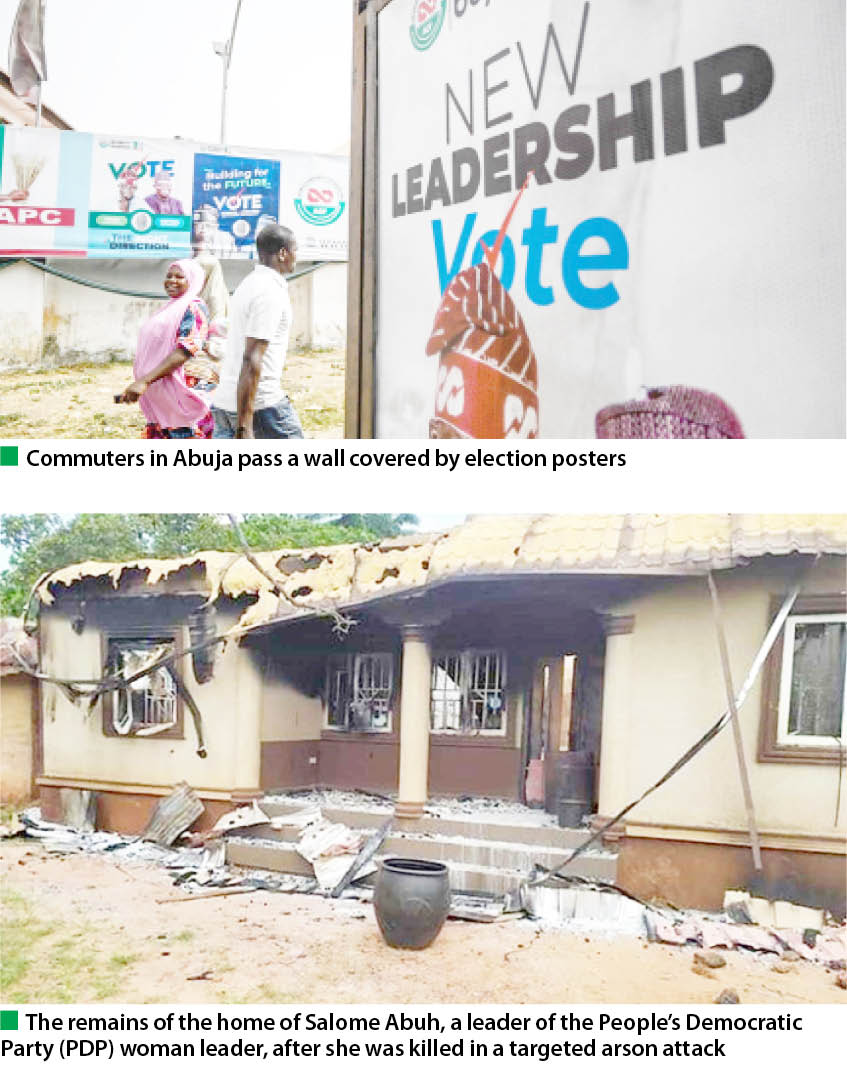 The recent uptick in violence against activists began in 2020 when organised protests against corruption and human rights abuses were gaining momentum amid a global wave of protests caused in part by the effects of COVID-19 restrictions on people’s lives and livelihoods. At the time the state security forces responded to these protests with a wave of oppressive tactics which have continued to date (see box). On August 18th 2020, amid the growing unrest, the head of the Human Rights Writers Association (HURIWA) Emmanuel Onwubuiko was among the first to go underground. At the time he had been in the midst of an investigation into corruption at the Ministry of Humanitarian Affairs, where officials appeared to have embezzled 500 million Naira (around US$1.1 million) meant for children’s school lunches.

Onwubuiko made the difficult decision to relocate his family after being followed home by a Toyota Camry driven by ‘a fierce-looking person, with about two other armed occupants’ while driving in Abuja on the evening of August 18 2020. Meanwhile, his work eventually led to an investigation by the Independent Corrupt Practices and Other Related Offences Commission (ICPC), a statutory agency that formally probes corruption, but so far the commission hasn’t published any report.

Local authorities’ tolerance of criminal behaviour is often more directly visible away further from the capital, in Nigeria’s 36 federal states. Against a backdrop of soaring youth unemployment, officials are turning a blind eye to the activities of gangs of underemployed young men, so long as those gangs also act in their interest when called upon. Groups of unemployed young men often operate as ‘supporters’ or ‘security guards’ for governors or senators, sometimes even wearing T-shirts that proudly display the names of their benefactors. On April 5th 2021, two protesters, Larry Emmanuel and Victor Udoka, were caught putting up posters calling on President Buhari to resign in Lokoja, the capital of Kogi State. A gang of ‘supporters’ descended on the two, beating and flogging them before handing them over to the police. Rather than charge the youths with assault for attacking citizens engaged in a widely-practised form of political speech, the authorities instead took the side of the perpetrators. The two activists were charged with disturbing the peace and jailed for 78 days before being released on bail. They were eventually acquitted more than a year later.

This tolerance of expedient criminality has also given rise to the phenomenon of freelance tax collectors, groups of youth who are licensed to collect ‘taxes’ from citizens. Often armed, they frequently target farmers or set up roadblocks to extort the drivers of trucks transporting cash crops, wood and smuggled goods across state boundaries. Such groups are allowed to keep the lion’s share of the money they collect, in exchange for their loyalty and availability in times of need. This debt usually comes due during election season, with tragic results: it was a group of tax collectors, for example, who burned Salome Achefu Abu alive in her house on November 18th 2019. Salome Abu was Woman Leader of the PDP in Kogi State and an opponent of the incumbent. The killers made no secret of being ‘on assignment’ for Yahaya Bello and Edward Onoja of the All Progressives Congress (APC), the state’s governor and deputy governor respectively. Other houses in the area were also burned down in the same attack.

In his police statement, Ocholi Edicha, a group member who has since been convicted of arson and murder, said that they were sent by the ruling APC ‘to defeat the opposition’ PDP in that election. ‘Atta Akpa Ugbedu [a supposed leader of the APC] from Ejule [a major town in Ofu Local Government Area] ordered that the property of any person with affiliation to Peoples Democratic Party (PDP) should be destroyed’, his statement said. It added that another APC party stalwart, identified as Barry from Itobe, directed that ‘we should continue destroying PDP members’ properties (and) continue burning houses unabated. They claimed that they are the people in control of the Government and nothing [in terms of punishment] will happen…’. Edicha described his group as being involved in ‘produce,’ a reference to their tax collections which in this case were levied from farmers.

When asked to comment on the accusations against his boss, Governor Yahaya Bello’s spokesman Kingsley Fanwo denied that Bello had played any role in the murder, instead portraying the incident as part of broader violence between political opponents. Meanwhile, Achefu Abu’s widower, Simeon Babani Seidu Abuh, also claims his wife was targeted. ‘She had already been beaten up while watching the voting process at her polling unit.’ After receiving hospital treatment for her injuries Achefu Abu decided to stay home to rest, but just the next day the couple’s home was set ablaze.

A report by election observers in Kogi State would later call for the annulment of the polls due to the unprecedented level of violence around the election, during which, it said, ‘political thugs were observed moving around freely in the company of Police and DSS operatives across many local government areas’. Its report noted that the secretariat of the opposition Social Democratic Party, which had been located only a few metres from the State’s police command headquarters in the capital, Lokoja, was also burned down. The elections were not overturned, however. The results stood and Yahaya Bello remains governor.

Like opponents of the ruling party, journalists are under constant threat in Nigeria’s states. In 2022 alone, the Press Attacks database reported a string of audacious attacks. In one attack, thugs loyal to a high-ranking member of the Ebonyi State House of Assembly beat up the local representative of the Nigeria Union of Journalists, Nnamdi Akpa. In other attacks in May and June, journalists attending opposition campaign rallies in Osun and Oyo states were badly assaulted. In June Haruna Mohammed and Idris Kamal found themselves arrested and arraigned before a magistrate court for publishing a story that angered a member of the Bauchi State House of Assembly. In October a gang loyal to a local politician in Zamfara State threatened and assaulted a leading member of the local Nigerian Union of Journalists, Ibrahim Musa Maizare, after he asked them to leave the building where the NUJ’s office was housed. According to Mazaire, the men shouted that they would not leave the place because it was given to them by a politician and that as long as the politician continue to live they would not vacate the place. Mazaire also said that while the police had quickly arrived at the scene, they did nothing and quickly left.

The police did nothing and quickly left

Nationwide, meanwhile, the use of legal charges to silence journalists is also on the rise, with more traditional charges of supporting terrorism, incitement and defamation falling out of favour, replaced by the use of a new law that criminalises cyberstalking. While the law is nominally meant to target fraud and identity theft, lawyers quickly realised that it had much broader oppressive potential. Kaduna State-based reporter Luka Binniyat, for example, fell foul of the law in November 2021 after a report he filed for the local Catholic News Agency accused the state government of failing to protect farming villagers against violent bandits. (The same accusation has been published in many reports covering rural violence in Nigeria, including by ZAM). The month before, two journalists in Kwara State found themselves charged with criminal conspiracy, defamation, inciting disturbance, injurious falsehood, and cyberstalking after they accused the state government of misuse of public funds while chatting in a Whatsapp group.

Olanrewaju Suraju of HEDA feels that Nigeria’s upcoming 2023 elections might be the last chance for a new government to ‘recognise that anti-corruption and human rights activists are partners in the development of Nigeria.’ ‘There will be little hope for the future otherwise’, he said. ‘Many activists, out of frustration, are (already) leaving Nigeria for developed countries.’  He added that the international community should do more in terms of ‘ex-communicating those with poor human rights records’ from ‘the comity of nations.’ ‘It’s really so bad.’ Meanwhile, also in the run up to the upcoming elections, the department supervising the secret services, the DSS, has warned state politicians to cease working with criminal gangs.

This is published in collaboration with ZAM Magazine in The Netherlands:  https://www.zammagazine.com/investigations/1568-nigeria-death-by-tax-collector

To read the stories in this series, click the links below: