Niger State government is making arrangements with private partners to invest in its Bida and Badeggi rice mills toward boosting rice production in the state.… 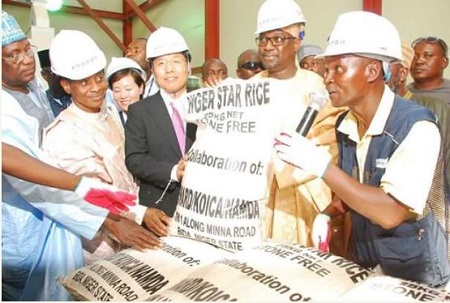 Niger State government is making arrangements with private partners to invest in its Bida and Badeggi rice mills toward boosting rice production in the state.

Malam Haruna Dukku, the state Commissioner for Agriculture and Rural Development disclosed this on Saturday at a press briefing in Minna.

“Our discussion with Elephant Group to take over Bida Rice Mill and three other companies to manage Badeggi Rice Mill has reached advanced stage.

“We are hoping that between December this year and January next year during the dry season farming the rice mills will start production,’’ he said.

Dukku, who did not give details of the Memoranda of Understanding with the private partners said that the deal was almost concluded.

He said that the Elephant Group would invest N200 million in the Bida rice mill when it began production.

The Commissioner disclosed that the Integrated Rice Processing and Milling Complex in Bida was donated to the state by the Korea International Cooperation Agency (KOICA) to boost rice value addition.

He said that the mill was constructed through a tripartite agreement of Federal Government, the state and Korea.

Dukku explained that KOICA spent $1.8 million in establishing the mill, the federal government put in N41.3 million in clearing the equipment while the state government spent N40 million on the perimeter fencing, generator house, water and provision of electricity at the project site.

The Commissioner said that the mill would generate over 10,000 direct and indirect jobs, when it comes fully on stream.

He said that the resuscitated Badeggi Rice Mill, in Katcha Local Government Area of the state, has the capacity to produce 10,000 metric tons of processed rice per day.

Dukku said the National Agricultural Performance Survey for this year’s wet season farming indicated that the quantity of rice produced in the state stood at 800, 000 metric tons. (NAN)