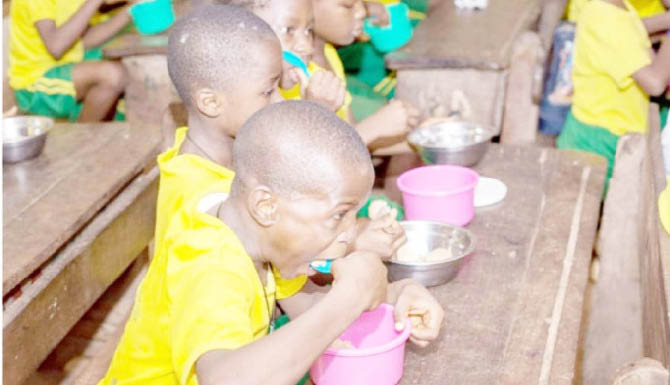 Ngige stated this in his office on Friday, when he received the United States Ambassador to Nigeria, Mary Beth Leornard and officials of the Department of State who paid him a courtesy visit.

He explained that the school feeding programme was part of efforts to eliminate the scourge of child labour in the country, saying Nigerian government introduced the programme to ”lure children engaged in child labour, back to school”

“We have introduced the National school feeding programme under our social security, to lure children back to school. As of today, we are feeding 10 million children across the country. We have spent nearly $100 million on this.”

“We have also taken more schools into the areas prone to child labour and made education free in the whole country through the Universal Basic Education Act and the Child Rights Act.

According to him, vulnerable families send their underage children to work in cocoa farms, mining sites or to engage in street hawking and petty trading, because family income is not enough, owing to underemployment or unemployment.

He explained that advocacy alone cannot reduce the scourge, as it would be difficult to retain the audience of a hungry person.

The minister lauded the US government for the recent technical assistance of the United States Department of Labour to West Africa, in the area of fighting violence and harassment at work under Convention 190 of International Labour Organisation (ILO).

“Nigeria and Liberia is listed there and the fund is $5 million, estimated to be spent on the project. We think that it is a step in the right direction.

Earlier, Leornard said the United States Government was worried to see that Nigerian children were subjected to the worst forms of child labour in quarries and granites and mining sites.

She assured that her country would continue to work with the Nigerian Government in addressing the scourge and appealed to the remaining seven states yet to domesticate the Child Rights Act to do so without further delay.

She said the US government was pleased to see a new programme in Nigeria that provides seed capital to vulnerable people to pursue programmes in areas with high prevalence of child labour.