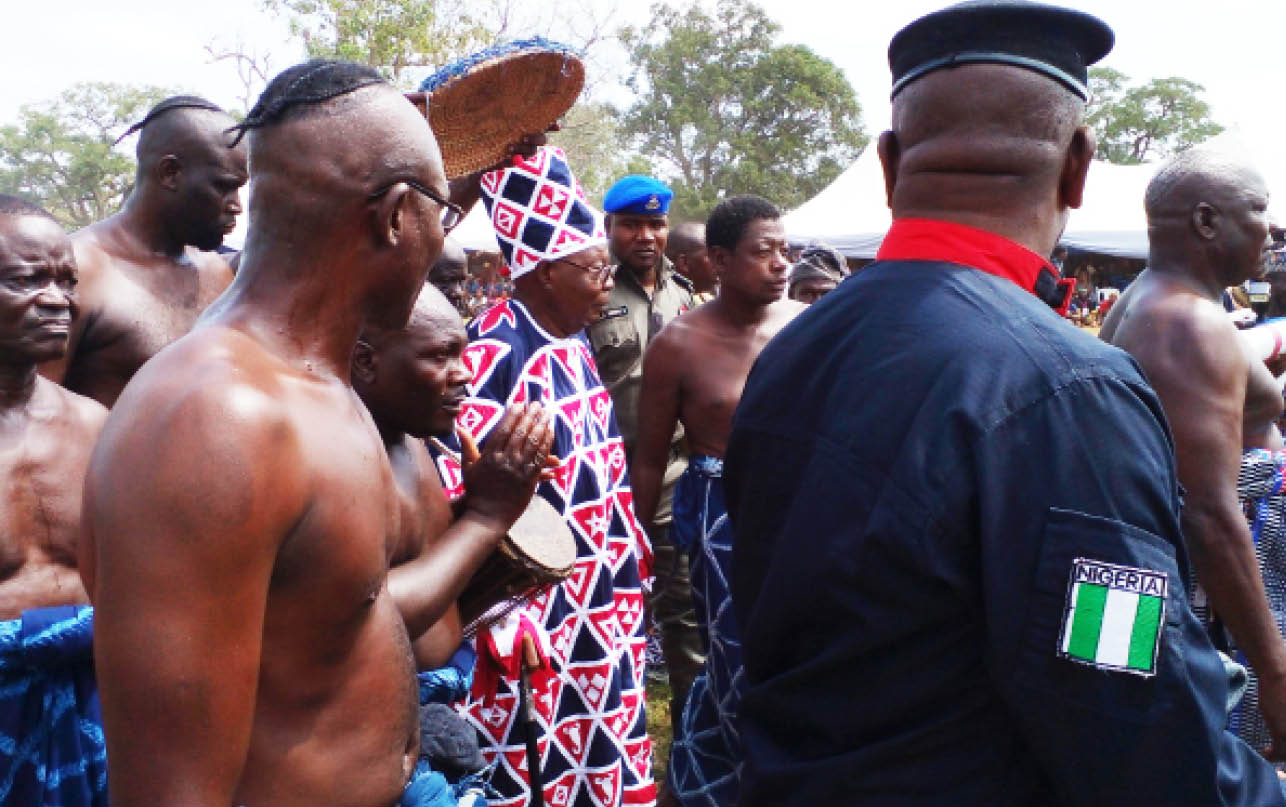 Manu Ishaku Adda Ali was recently presented with a first class staff of office and installed as the 25th Aku-Uka of Wukari by the Taraba State Governor Darius Ishaku amidst high hopes and expectations from the subjects, Daily Trust on Sunday reports.

The colourful coronation ceremony was attended by Plateau State Governor Simon Lalong; Sultan of Sokoto Saad Abubakar; retired General T.Y Danjuma; and other Emirs and Chiefs from different parts of the country.

The Aku Uka of Wukari is the paramount ruler of former Kwararafa Empire and is regarded as a spiritual leader of Jukun descendants.

As the Aku Uka mounts the throne of his forebears, there are expectations from the people that he would promote peace, unity and engender development not only in Jukun land but in the entire Taraba State.

In his address, Governor Darius Ishaku told the Aku Uka to unite his subjects and ensure peace in his domain.

He also warned traditional rulers in the state against selling lands to strange people.

Earlier in his address, retired General T.Y Danjuma charged the new Aku Uka to unite his subjects, saying that will help them defend their land against the enemies.

“Give us the right leadership so that we can collectively defend our land and I, as your loyal subject, will provide the raw materials for the defence of Jukun land,” T.Y. Danjuma said.

In his address, the Sultan of Sokoto Saad Abubakar congratulated the Aku Uka for ascending to the throne of his forefathers and urged him to work hard and ensure peace in his domain.

The Sultan also advised youths not to allow themselves to be used by politicians as political thugs.

On his part, a subject, Rimande Solomon while expressing delight over the coronation of the new Aku Uka said he expects him to promote peace and unity in the land.

“We have witnessed ugly bloody clashes in our land which had led to loss of lives and destruction of properties in the past. It is my hope that under the reign of the new Aku Uka, Wukari and other parts of Jukun land will experience peace and progress,” he said.

In his address, the new Aku Uka pledged to uphold justice and fairness in the discharge of his responsibility to the people of his domain.

He also affirmed that it was incumbent on him to rule his people with all decency in order not to compromise the confidence of government and the people.

The new Aku Uka also promised to preserve the language and craft of Jukun people including mode of dressing for the sake of the next generation.

He commended the late former governor of defunct Gongola State Abubakar Barde for upgrading the stool of the kingdom to first class after many years of injustice meted out to the chiefdom despite being one of the oldest in the country.

The monarch disclosed that since the creation of the chiefdom in 1596, one clan was usually appointed to be Aku Uka which later rose to four and now preserved for only two ruling houses.

He paid tribute to his predecessor, the late Aku Uka Shekaŕau Angyu Masa Ibi, who ruled the chiefdom for 45 years.

He also expressed his appreciation to Governor Darius Ishaku for ensuring that the process for the selection of Aku Uka was done without interference, which he said deserved praises from the Jukun race.

The new Aku and his emergence

Born on 24 March, 1946, Manu Ishaku Adda Ali is the son of late Aku Uka Manu Adda Ali Agbumanu, the 23rd Aku Uka who ruled the chiefdom from 1974 to 1976. A holder of Higher National Diploma in Forestry, the new Aku Uka retired in 2000 after 35 years in the Civil Service.

The selection of the new Aku Uka started after the death of the former Aku Uka, Dr Shekarau Agyu Masa Ibi, in January 2021. In Jukun tradition, Aku Uka does not die but only joins his ancestors.

The selection process is strictly guided by spiritual and traditional rites which the king makers have to follow. The king makers comprised Abon- Achuwo, Abon-Ziken, Kinda-Achuwo, Kinda-Ziken and Kun-Vyi.

Manu Ishaku Adda Ali however emerged the preferred choice for the stool from among the princes presented from the two ruling houses – Ba Ma and Ba Gya.

It was authoritatively learnt that the governor of the state has no powers to interfere with the selection process of a new Aku Uka and the kingmakers only present one name for approval to the governor. Interestingly, there will be no dispute among the princes or the ruling houses on the choice of kingmakers.

Manu Ishaku Adda Ali’s name was however presented to Governor Darius Ishaku for approval, and thereafter, he was crowned in line with Jukun tradition (Pankan) at Bye Vyi on the 28th January, 2022.

The new Aku Uka, from Ba Ma ruling house, went through traditional rites and rituals at the Jukuns spiritual site at Puje, Bye Vyi and Kuntsa and came back to Wukari town where he was received by a mammoth crowd.

After the first phase of spiritual rites and rituals, he had to perform other rites at Akwana, Arufu and Wapan Nghaku in order to be recognized as Aku Uka.

The venue of the coronation ceremony located along Ibbi Road was filled to capacity with guests from far and near, including the Sultan of Sokoto Saad Abubakar; General T.Y Danjuma (rtd); Plateau State governor Simon Lalong; Emirs and chiefs from Benue, Kogi, Adamawa, Gombe, Niger as well as all first-class emirs and chiefs in Taraba State.

The event started with a procession of elderly women, men and young boys as well as masquerades and traditional dancers from within and outside Wukari town, signifying the commencement of the coronation ceremony.

This was followed by a long procession of king makers and traditionalists who accompanied the new Aku Uka to the venue where a sitting arrangement for him and the governor was made.