The clinical Netherlands ended the United States’ World Cup dream on Saturday, sweeping into the quarter-finals with a ruthless 3-1 victory. First-half goals from Memphis… 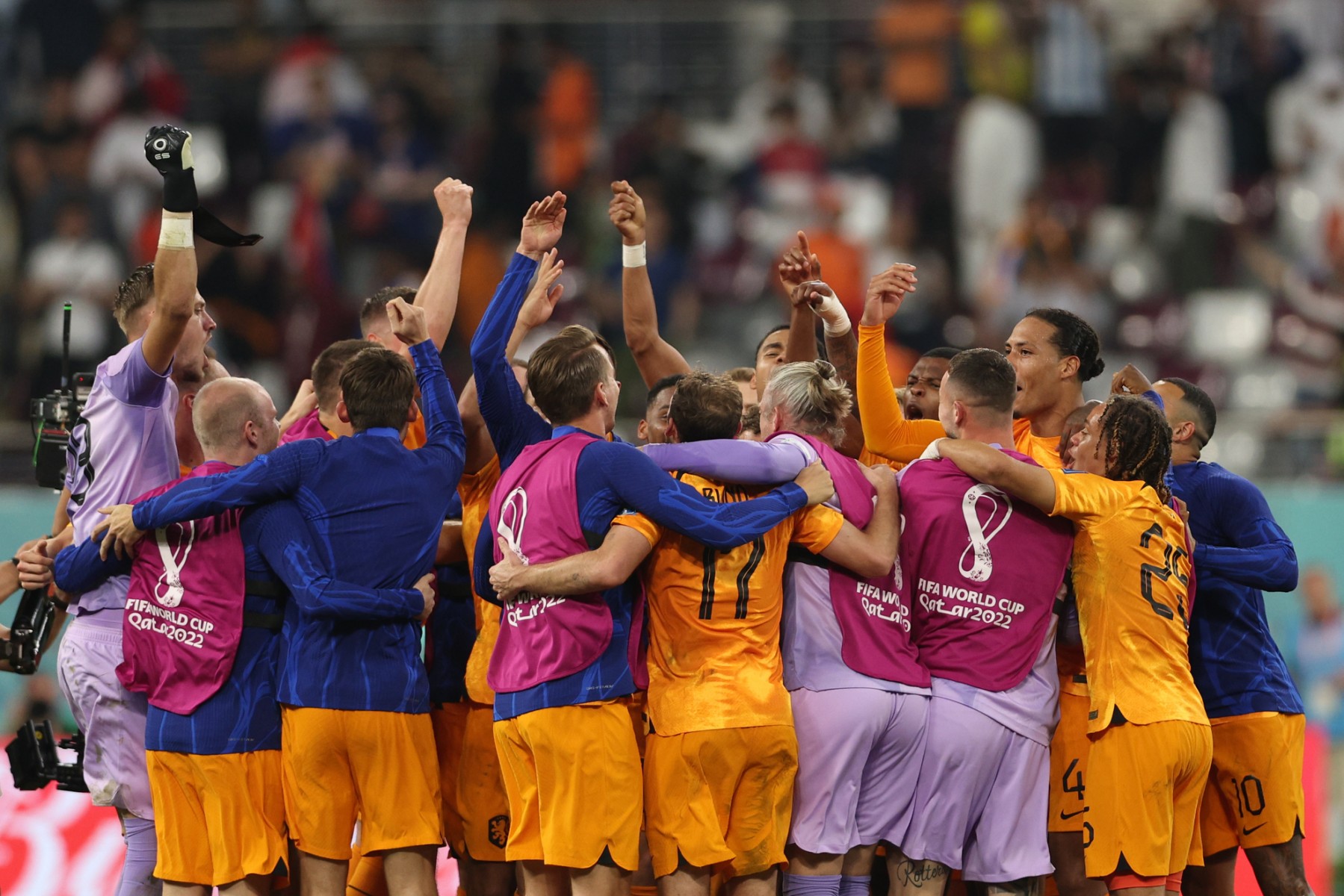 Netherlands’ players celebrate at the end of the Qatar 2022 World Cup round of 16 football match between the Netherlands and USA at Khalifa International Stadium in Doha on December 3, 2022. (Photo by Adrian DENNIS / AFP)

The clinical Netherlands ended the United States’ World Cup dream on Saturday, sweeping into the quarter-finals with a ruthless 3-1 victory.

First-half goals from Memphis Depay and Daley Blind and a late strike from Denzel Dumfries sealed a deserved victory as the Dutch handed out a painful lesson in finishing to their American opponents.

The Netherlands, bidding to win their first World Cup after losing in three previous finals, will face Argentina or Australia in the last eight.

Although the USA enjoyed long periods of possession in a bright first-half display, all too often a lack of composure in the final third let them down.

Instead, it was the Dutch who calmly bided their time before carving open the Americans with forensic precision.

USA forward Christian Pulisic squandered a golden chance to put his team 1-0 up after only three minutes when he found himself in space only to see a scuffed shot saved by Andries Noppert.

Buoyed by that early chance, the US remained on the front foot, attacking high up the field.

But in 10 minutes the Netherlands took the lead. A superb interplay in midfield saw the ball worked to Inter Milan’s Dumfries down the right.

Dumfries picked out Depay, who swept home the finish to cap a majestic 20-pass move that was in the best traditions of the Netherlands’ total footballing heritage.

Again the Americans advanced purposefully into Dutch territory through Pulisic, only for the Chelsea player to deliver a cross that fell behind his US teammates.

Tim Weah had the best American chance of the remainder of the half on 43 minutes, letting fly with a rasping shot that Noppert parried away.

But in first-half stoppage time, the Netherlands delivered the hammer blow.

Dumfries again found space down the right and drilled a cross to Blind, who had ghosted clear of Sergino Dest, for an emphatic low finish.

The Netherlands nearly extended their lead early in the second half when Dumfries’ low cross was prodded towards the US goal by defender Walker Zimmerman, forcing a smart save from Matt Turner.

USA coach Gregg Berhalter introduced Gio Reyna for the ineffective Jesus Ferreira in attack at half-time in an effort to provide a sharper cutting edge.

The Borussia Dortmund player made an instant impression after setting up a shot for Weston McKennie that sailed over the bar.

Berhalter brought on Haji Wright for McKennie midway through the second half and the move sparked a fleeting revival.

After seeing a goal-bound chance cleared at the near post on 75 minutes, Wright scored a minute later when his flick from Pulisic’s cross looped over Noppert into the Dutch net for 2-1.

Yet the American fightback was short-lived. In the 81st minute, another Dutch attack pulled the USA defence out of position, and Blind calmly crossed to an unmarked Dumfries at the far post, who made it 3-1.