The National Drug Law Enforcement Agency (NDLEA) has foiled an attempt by traffickers to smuggle cannabis and ecstasy tablets concealed in three tubers of yam.… 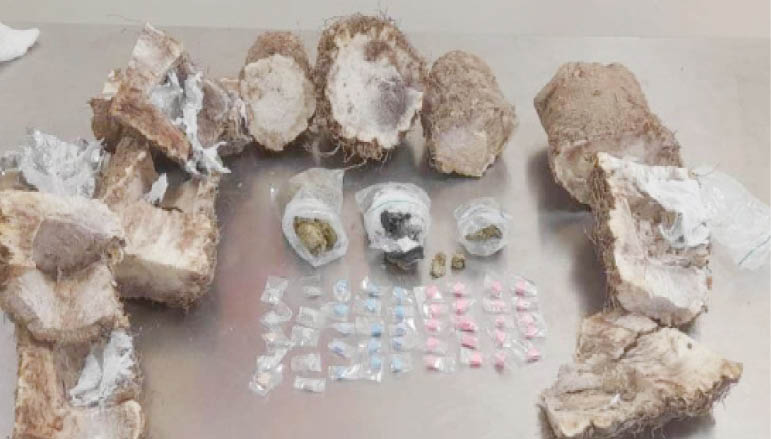 The National Drug Law Enforcement Agency (NDLEA) has foiled an attempt by traffickers to smuggle cannabis and ecstasy tablets concealed in three tubers of yam.

Spokesman of NDLEA, Femi Babafemi, disclosed this in a statement on Sunday, saying officers attached to the Skyway Aviation Handling Company Plc (SAHCO) export shed of the Lagos airport made the arrests.

He said the yams, which were going to Dubai, United Arab Emirates (UAE), were intercepted on Wednesday November 17.

He also said the freight agent who presented the yams for export, Inegbu Akunna, was arrested while the consignor, Ahmodu Sulaimon, was nabbed thereafter.

Meanwhile, NDLEA operatives have arrested one Agamuche Nkeonye and a lady, Oluwakemi Adeoye, heading to Oman via Asky Airline at the departure hall of the Lagos airport.

Babafemi said Nkeonye, accompanied by Adeoye, presented a bag containing varieties of foodstuff and body lotion for inspection and was arrested on Thursday November 18.

He said 1.10kg of Indian hemp and rohypnol capsules were concealed in the bag. (NAN)