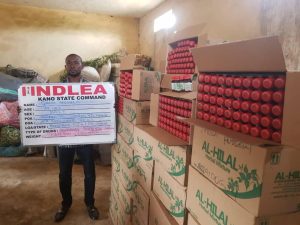 The Director, Media and Advocacy, NDLEA, Mr Femi Babafemi, said in a statement on Sunday in Abuja, that the suspect was arrested on September 13.

Babafemi said the suspect, Qasim Ademola, was arrested by anti-narcotic officers with the Akuskura substances meant for distribution across Northern states.

He said that the consignment was seized on September 15 along Zaria-Kano road, Gadar Tamburawa, Kano.

He added that the 39-year-old proprietor from Akinyele Local Government Area of Oyo State and three of his distributors were arrested in follow-up operations. (NAN)