The federal government has disclosed that 133 million Nigerians are living in poverty. This represents 63 per cent of the over 200 million people in… 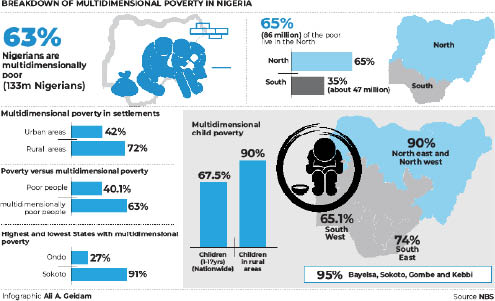 The federal government has disclosed that 133 million Nigerians are living in poverty. This represents 63 per cent of the over 200 million people in the country.

Daily Trust reports that the measure used to calculate the figure was based on the Multidimensional Poverty Index (MPI) with four components of health, living standard, education, security and unemployment.

Previously, the measures used to determine the country’s poverty were through the monetary poverty indices, which calculate the number of people living below the US dollar.

Also, the coming of COVID-19 and other challenges have affected millions of people even though the country was for decades struggling to take millions of children off the streets and back to school.

The figure, which was presented during the launch of the Poverty Index (MPI) Survey yesterday in Abuja was conducted by the National Bureau of Statistics (NBS), the National Social Safety-Nets Coordinating Office (NASSCO), the United Nations Development Programme (UNDP), the United Nations Children’s Fund (UNICEF), and the Oxford Poverty and Human Development Initiative (OPHI).

The survey, which sampled over 56,000 households across the 36 states of the Federation and the FCT, conducted between November 2021 and February 2022, stated that 65 per cent of the poor, 86 million people, live in the North, while 35 per cent, nearly 47 million live in the South.

The report said, “Over half of the population of Nigeria are multidimensionally poor and cook with dung, wood or charcoal, rather than clean energy. High deprivations are also apparent nationally in sanitation, time to healthcare, food insecurity, and housing.”

It identified Sokoto State as having the most poverty level across states with 91 per cent while Ondo has the lowest with 27 per cent.

On state profile, it said Kano has the highest number with 10.51m while the least is Abia with 1.12m people.

The report, which included the Child MPI stated that two-thirds 67.5 per cent of children (0–17) are multidimensionally poor and half, 51 per cent, of all poor people are children.

It added that the highest deprivations are in the indicator of child engagement, where over half of the poor children lack the intellectual stimulation pivotal to early childhood development.

“Child poverty is prevalent in rural areas, with almost 90% of rural children experiencing poverty. Across the geo-political zones, the child MPI shows higher poverty in the North-East and North-West (where 90% of children are poor) and lower poverty in the South-East and South-West (74% and 65.1% respectively). The incidence of Child MPI is above 50% in all States and greater than 95% in Bayelsa, Sokoto, Gombe and Kebbi.

Speaking at the event, President Muhammadu Buhari said the index was adopted because it provides ways poverty could be identified and would influence the allocation of resources to target sectors where most citizens suffer deprivations.

President Buhari who was represented by his Chief of Staff, Prof. Ibrahim Gambari said the multidimensional way of understanding poverty has been helpful in highlighting beyond monetary/income-based poverty measurements.

“Nigeria is a large and diverse country. Using the disaggregation to show the vast range in the levels of poverty, we can see the precise needs for each state or senatorial district, which will allow policymakers at that level to take appropriate action.”

The Minister of State for Budget and National Planning, Clem Agba, said the report provides a more comprehensive view of poverty by not only revealing who is poor, but in what way, and to what degree of intensity, hence turning it into a very practical resource for addressing the problem of poverty in all its forms and dimensions.

He added that since the advent of the COVID-19 pandemic, some of the gains made by the administration have been reversed, “Particularly in the areas of healthcare and educational development, the government has been making significant efforts to address these setbacks and put the country back on a sound footing for long-term economic and social prosperity.”

The Statistician General of the Federation/CEO  of NBS, Semiu Adeyemi Adeniran, noted that the MPI, which uses three dimensions (health, education and living standards), was upgraded to include a fourth dimension of work and shocks.

He said other variables such as food security, water reliability, underemployment, security shocks and school lag, were all added to reflect the current realities and priorities in Nigeria.

“This additional dimension contains eight vital aspects of early childhood development in physical and cognitive domains, including severe undernutrition, immunisation, intellectually stimulating activities, and preschool. While it does not offer individual-level data, it uncovers additional children who according to the extra dimension should qualify as multidimensionally poor.”

Reacting to the figures, experts have urged the federal government to establish skills acquisition centres for citizens to acquire skills that earn them sustainable income as cash distribution would not solve the problems of poverty. A population expert and National Coordinator of Rotary Action Group for Reproductive Maternal and Child Health (RMCH), Prof. Emmanuel Lufadeju, skills like farming, tailoring among other professionals would empower citizens.

“The government should also liberalise soft loans for SMEs. These people that we say are poor, can’t they do construction of roads under an engineering expert, build housing estates and drainages and they should be paid? It is better to get people engaged in work and pay them, not to just distribute money and say you are alleviating poverty,” he said.

A development expert at the Centre for Fiscal transparency and Integrity Watch (CeFTIW), Mr Victor Agi, said the report is not surprising given all the failing economic indices; from the dwindling revenue, huge debt burden, to the pressure on the fiscal and monetary sides of the economy, with ordinary Nigerians at the receiving side of all of these negative indicators.

“At an inflation rate of 21.6%, households across the nation continue to find it difficult to feed, and access to healthcare and other basic necessities remain a mirage. So, it’s not surprising that the NBS has arrived at this figure in its report.

“For the economy, this means more pressure, especially going into an election year where the volume of commercial and economic activities will be largely affected as a result of the political activities,” he explained.

He stated that only productive cash will tackle the poverty level. “Well, it may be true that there would be more money in circulation, especially also given the recent monetary policy by the CBN, but when cash is not used to stimulate productive economic activities, we would continue to contend with inflation and devaluation of the naira,” he said.

He further called for the improvement of revenue generation “and ramp up our production sector and get more Nigerians to be productive.”