Ahead of the forthcoming elections into the board of the Nigeria Basketball Federation (NBBF), some aggrieved players have accused the Minister of Sports and Youth… 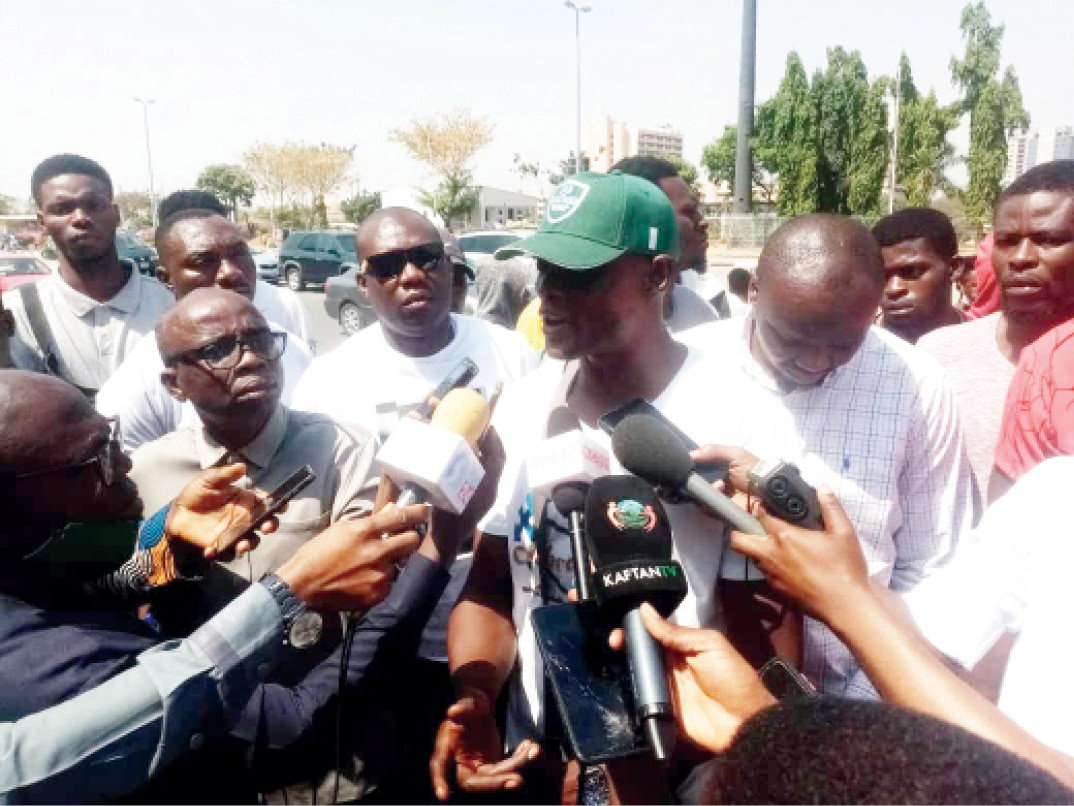 Former players’ representative on the board of the NBBF, Ejike Ugboaja addressing the press during yesterday’s protest in Abuja

Ahead of the forthcoming elections into the board of the Nigeria Basketball Federation (NBBF), some aggrieved players have accused the Minister of Sports and Youth Development, Sunday Dare, of taking side with the immediate past NBBF president, Engineer Musa Kida, who is seeking a second term in office.

The players yesterday staged a peaceful protest to the Federal ministry of sports in Abuja where they accused the minister of trying to impose the former president on them.

Trouble began last week when the sports ministry, in a memo by the NBBF General Secretary, Mrs. Afolabi-Oluwayemi Olabisi, said the 2021 NBBF elections would now be held on January 31 in Abuja. But Kida is insisting that the elective congress would hold on the same date in Benin City.

However, the players have since written to the sports ministry rejecting the January 31 election notice.

Led by the immediate past players’ representative on the NBBF board, Ejike Ugboaja and his successor, Stanley Gumut, at yesterday’s protest, the players insisted the minister is working against their interest.

“They (sports ministry) do not want to conduct an election. All they want to do is to force on us someone that we don’t want.

“We the players can boldly say FIBA is not Nigeria and we are not scared of their ban. As it stands today, if they force a president on us, we are going to ban ourselves from playing basketball.

“He (Musa Kida) will not lead us anymore. I am emotional right now because they are taking us for granted,” said Ugboaja.

Gumut also complained about the time they had wasted waiting for the minister to resolve the crisis.

“They wasted our time in the name of reconciliation and now they want to abandon us to our fate. This is like a coup against us. In fact Sunday Dare has failed us,” Gumut lamented.

However, to exonerate the minister of the allegations, one of his aides made available to Daily Trust the November 19, 2021 correspondence between FIBA and the Sports Minister wherein the deadline for elections into the NBBF board was given by the international body.

The letter signed by FIBA president, Hamane Niang reads in part: “We thank you for your letter dated 17 November, 2021in which you addressed FIBA with regards to governance matters of basketball in Nigeria…

“We hereby inform you that FIBA Central Board has approved a deadline extension for the celebration of the Nigeria Basketball Federation’s (NBBF) Electoral Congress up until 31 January 2022.

‘In doing so, FIBA reiterates and confirms the contents  of our letter dated 2 November, 2021, including that FIBA will not recognise any changes to the NBBF’s statues prior to the celebration of the Electoral Congress.”

The minister’s aide, who craved anonymity, said the sports ministry was acting based on the letter from FIBA and wondered how his principal is working for Kida as alleged by the players.