The Nigerian Navy has requested partnership with Media Trust Group, publishers of Daily Trust and owner of Trust TV, on its activities. The Director of… 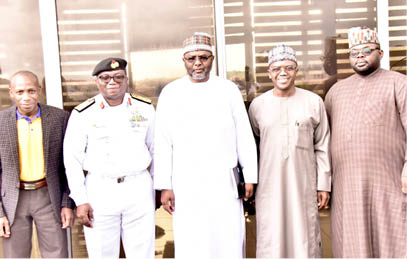 The Nigerian Navy has requested partnership with Media Trust Group, publishers of Daily Trust and owner of Trust TV, on its activities.

The Director of Information at Naval Headquarters, Commodore Adedotun Olukayode Ayo-Vaughan, made the request when he led a team on a courtesy visit to the company’s corporate head office in Abuja.

“We are here to seek support and canvass for more collaboration in bringing to public space, information about the Navy and all that we do.

“We always try to make sure that people are not misinformed in an age where fake news and unverifiable news goes out into space and people get the wrong impression, wrong opinion of what should not be. We request that you allow us to use your space to tell the world what we are doing,” he said.

He dismissed reports that 200,000 barrels of crude were stolen daily, saying it was not possible to lift such a quantity of crude without anyone’s notice.

He said through the Navy’s falcon eye asset, it had been impossible to move products to shores.

He said the newly acquired unmanned aerial vehicles would be deployed and integrated into the Falcon eye asset to boost the fight against crude oil theft.

Ayo-Vaughan said the Navy had arrested over 100 vandals and destroyed over 300 illegal refining sites.

The Group Executive Director, Digital and Editorial, Naziru Mikailu, urged the Navy and other military services to seize the opportunities of the company’s growing popularity on digital platforms to showcase their achievements.

Responding to a question from the Group Executive Director, Business Development, Ahmed Shekarau, on whether low motivation of naval officers is contributing to the crude oil theft, Ayo-Vaughan said the personnel were handsomely rewarded in line with the rules of engagements and conditions of service.

Other members of the company’s management team in attendance were the Group Executive Director, Finance and Corporate Services, Nura Daura and the Chief Operating Officer, Trust Television, Ibrahim Shehu Adamu.