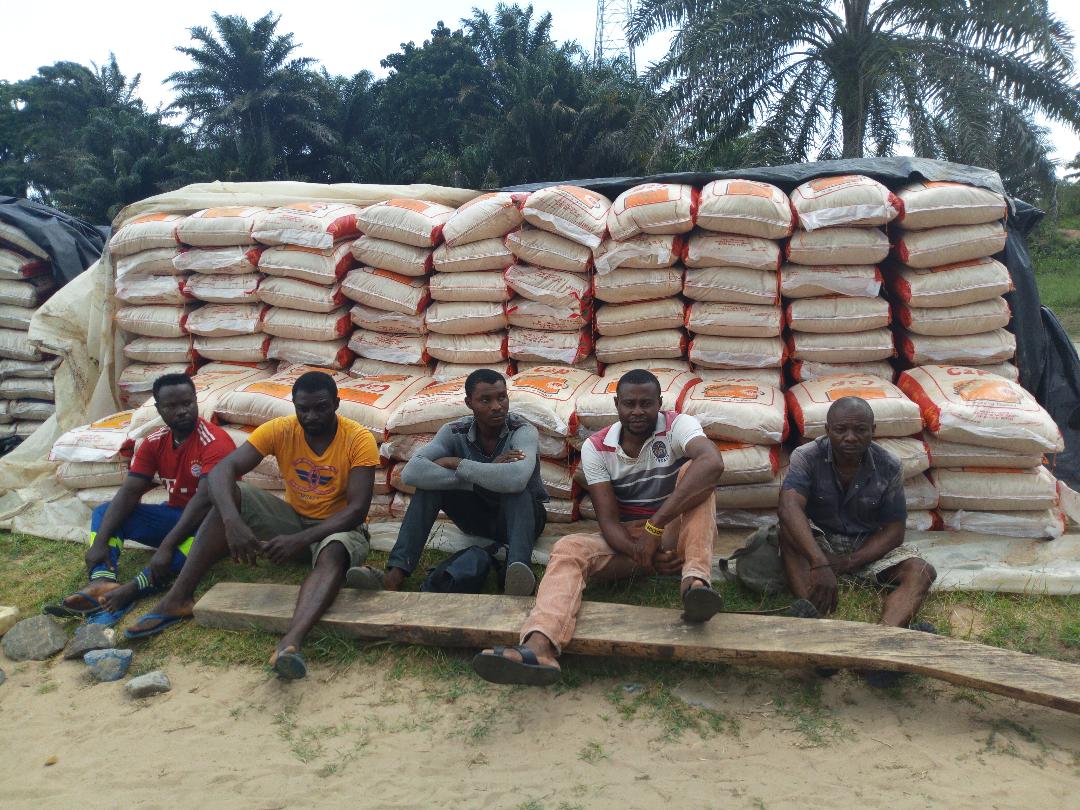 One set of suspects arrested with contraband rice in Akwa Ibom. Photo by Iniabasi Umo, Uyo

Other items seized from the suspects between May 1st to 3rd, 2019 include two wooden boats, two fibre boats, four outboard engines and four pumping machines.

Speaking in Ibaka during the hand-over of the suspects, and items to the Nigeria Customs Service, Commanding Officer, FOB, Captain Toritseju Vincent, promised that the Navy will remain committed to its assigned roles in checking illegalities on the water ways.

Receiving the suspects and items on behalf of the Controller, Eastern Marine Command, Nigeria Customs Service (NCS), Port Harcourt, Elton, Assistant Controller, Ali Garko thanked the Nigerian Navy for their efforts in arresting illegalities on the water ways, and appealed to the smugglers to deist from the act as it was detrimental to the nation’s economy.

Two of the suspects, Edet Okon and his 17-year-old nephew, Raphael Edem, said they were only passengers on the boat when it was arrested and are not part of the smugglers. He said he came back to Nigeria to visit his sick sister.

“I don’t know what is happening here. I boarded a boat in Cameroon to come and visit my sick sister, and then I saw myself here. I don’t know the boat was carrying rice because I was in a rush to come down to Nigeria. I have been in Cameroon for three years,” he said.

Raphael stated, “I have been living in Cameroon with my uncle for three years now. When my Uncle told me my mum was sick, I boarded the boat to come to Nigeria but I did not know the boat was carrying rice, and I don’t know any of the people in the boat with me except my Uncle, who I came with.”