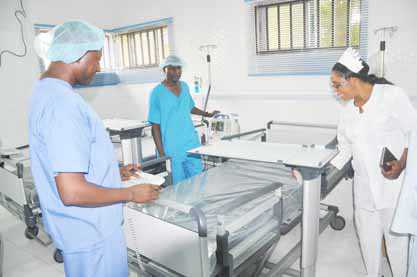 The Nigerian Medical Association (NMA) has threatened to take legal action against the Federal Government for failing to include the provisions of the National Health Act (NHA) in the 2017 budget.

Dr Mike Ogirima, President of the association, hinted at a stakeholders’ advocacy and awareness walk for implementation of provisions of the NHA organised by NMA on Wednesday in Abuja.

Ogirima explained that the main aim of the walk to the Presidential Villa was to drop a letter with President Muhammadu Buhari, calling on the government to immediately implement the act after two years.

The NMA president said that the Act, which was enacted two years ago, has the potentials to turn around the bastardised health sector.

He identified the benefits of the Act to include improving funds to the health sector, increase access to quality and affordable healthcare, availability of emergency services across the country, reduction in out of pocket expenditure by citizens.

Others are improved maternal and child care, increased levels and efficient entrenchment of clinical governance.

He regretted that two years after the enactment of the Act the federal government was yet to capture or make budgetary provisions for its implementation.

He described the country’s maternal and child mortality rate as alarming, noting that 35 of 100 live births and 450 per 1000 live births was not good enough.

According to him, operationalisation of this Act with increase enrolment in the National Health Insurance Scheme (NHIS) will bring about the much desired Universal Health Coverage which is the way to ensure healthy citizens.

Ogirima assured Nigerians that the association would sustain its advocacy until the federal government operationalised all the provisions in the Act.

“The passage into law of the Act by the National Assembly and the subsequent ascent by the President Federal Republic of Nigeria was received with a sigh of relief by all Nigerians including doctors.

“This was because the Act makes specific provisions for basic healthcare funds which is first line charge on the consolidated revenue of the federal government.

“This fund is to be primarily deployed to our primary healthcare which has been so neglected in the past and start reversing unacceptable health indices in the country.

“The fund which is known as basic minimum health package is also made available to NHIS to provide services to the less privilege, the under five, the aged, accident victims on our roads.

“This will ensure that within 24 hours of any emergency you and I anywhere in the country will receive adequate care. Unfortunately, it is very sad two years after the Act was enacted its operations has not commenced,’’ Ogirima said.

Similarly, Mr Edwin Ikhuoria, Country Representative, ONE Campaign, an NGO, described as illegal failure for the federal government to implement the Act.

Ikhuoria restated the commitments of stakeholders to get judicial opinion about the legality of non implementation of the Act.

“The next step is we will get judicial opinion about the legality or otherwise of non-implementing the National Health Act two years of passage into law.

“We cannot understand the reason why the content of the Act will not be implemented. The next step is to get judicial opinion and see if the government will disobey or flout its own law,’’ Ikhuoria said. (NAN)