My daughter died while trying to help feed the family — Mother of girl,14, killed in Jos village

Maryam Salisu was a 14-year-old who was murdered in cold blood on September 7, 2022, in the outskirts of Babale village of Jos North Local… 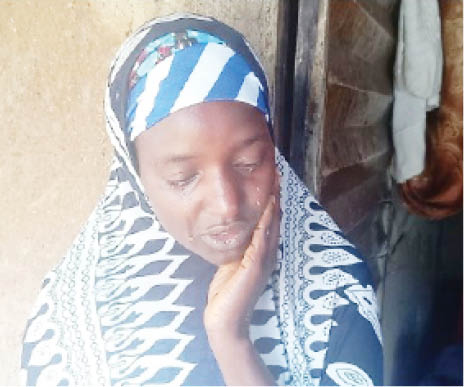 Maryam Salisu was a 14-year-old who was murdered in cold blood on September 7, 2022, in the outskirts of Babale village of Jos North Local Government Area of Plateau State. The incident occurred when she and 12 of her friends went to a nearby hill in the village to fetch firewood for their parents, but she couldn’t return alive. When Maryam was attacked by her killer suspected to be a ritualist, who was said to have hit her with a bamboo on her head, her friends fled home to report and in no time, residents of the village — men and women — young and old, trooped out to the scene to rescue her but couldn’t find her and the culprit. They all returned home and got back the following morning and, fortunately, discovered her corpse in a trench with her two breasts and eyes, throat and tongue, cut off. In this interview with the mother of the deceased, Fatima Danliti, she spoke about her pain of losing a child. Excerpt:

Your daughter is no more. How did you feel when the news of her demise was broken to you?

I was at home when the news of the incident came in. We couldn’t believe that she would be treated to the level that we would miss her forever. We couldn’t believe that she would be killed in cold blood. The death of Maryam was painful. whenever I remember her, I feel bad about it but there is nothing I can do. That was how the Almighty wanted it to happen. It is her destiny to die the way she died. I will never forget the death of Maryam.

That was not the first time she was going to the hill to fetch firewood. She used to go there to fetch firewood at regular interval. Sometimes, we went together to fetch the firewood because this is our means of livelihood. From the money we sell the firewood, we also use part of it to solve some basic needs such as buying soap, jelly, palm oil among others for the family.

Since 2019 when my husband died, there is nobody to take care of us. We relied on him to provide food for the family. But now that he is no more, no one to give us food. In order not to delve into begging on the streets or moving from one man to another, we just had to create a means of livelihood so that we won’t remain hungry. You can’t remain at home and wait for food to come to your table. Everyone is battling to survive.

What we usually did basically was that anytime the firewood was brought to the house, we sold it and used the money to feed the family. So, that day I didn’t go with her. She went together with her friends who are of almost the same age.It wasn’t her first time. It was something she used to do. That day was entirely strange. She had never for once said she was being threatened by anybody. They would always return peacefully.

You described the late Maryam as a hardworking person and how useful she was to the entire family. What are you mostly missing from her absence?

Mayam was almost everything to me. The absence of Maryam will continue to linger in my memory because she was very strong and hardworking. It is painful anytime I remember her death. She was a good girl who liked to please the family. She felt and empathised with me when things were hard. She knew what was right or wrong, and just to everyone.

Was she also attending any school?

Yes, she was going to school; she was attending L. E .A. Primary School Babale. She was in primary 5 and was to finish next year but that dream was dashed by the unfortunate incident.

You were disturbed when people returned the first day and couldn’t find the body of Maryam at the hill. How did you feel when her corpse was found the following day after a long search?

Now, my mind is at rest since her body was recovered. If there is one thing I am happy with now, it is the discovery of her corpse. When people couldn’t find the body on the day of the incident, I was disturbed and began to imagine how Maryam’s corpse could be traced on the high hill after rigorous search by good samaritans in the community.

For those who killed her, let them go. If they escape now, they won’t escape on the Day of Judgment. Allah is above everybody. It is now between them and the Creator. My word to her (Maryam), I pray to Allah to show mercy on her. May her soul rest in perfect peace.

Who do you think can fill the gap created by the demise of your daughter?

Maryam had been very helpful to me. We don’t know what will happen tomorrow. There is nothing Allah cannot do. If He wishes, I can get someone among my children to fill the gap. But for now, the gap is yet to be filled. Getting someone like Maryam is not going to be easy. But like I told you, Allah can do everything that you cannot imagine. I am hopeful to get someone of her hardworking and moral character.

For now, we are asking for assistance from spirited individuals. The girl used to help us a lot but she is no more. If not for the threat at the hill site, I would have said I will be going there myself. But because the hill is no longer safe for everyone, life would be challenging as creating another means of livelihood is something else. Even before she died, we were living from hand to mouth and that opportunity is not available again. My husband left me with eight children. With the death of Maryam, they are now seven.

What will you tell those parents who may wish to send their children to the hill for firewood again?

I am calling on those who send their children to the hill to stop. Of course, the children fetch the firewood for us to cater for the family, but we can’t continue to do so. Since things have changed now, we have to leave that. It has happened and we shouldn’t allow it to happen again. We should be careful. It was a destiny that Maryam got herself killed on the hill. Parents should distance themselves from the area. I am advising people not to be sending their children to the hill for any reason.