The Muslim Ummah of South West Nigeria (MUSWEN) has launched a N10 billion Endowment Fund to empower the downtrodden Muslims in the zone.  The launch,… 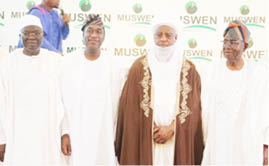 The Muslim Ummah of South West Nigeria (MUSWEN) has launched a N10 billion Endowment Fund to empower the downtrodden Muslims in the zone.

The launch, which held in Lagos, was attended by Muslim scholars, captains of industries, royal fathers and Muslims in private and public establishments.

A Board of Trustees (BoT) was also inaugurated to manage the fund independently.

MUSWEN President, Alhaji Rasaki Oladejo, assured that the fund would be expended judiciously for the execution of beneficial programmes and projects.

The projects, he said, include education and empowerment of Muslim women and youths to reduce unemployment and poverty, development of an entrepreneurship centre for skills acquisition, establishment of scholarship fund for human capital development and support for healthcare needs of the Ummah, among others.

Dr. Wale Babalakin, SAN, stressed the need to expand MUSWEN to be able to address problems that are peculiar to the southwest.

He noted that some conscious efforts made by well-meaning Muslims in the past were hijacked by some overzealous extremists.

The keynote speaker, National Missioner of Ansar-Ud-Deen Society of Nigeria, Sheikh AbdurRahman Ahmad advocated the need for Muslims to acquire education, saying without it, poverty will continue to rise, especially among the Muslim community.

The Sultan of Sokoto, Alhaji Muhammad Sa’ad Abubakar, called for unity among Muslims.

He said, “We can be united, but we don’t have to be uniform. That’s why we have people who are Yorubas, Igbos, Hausas, Fulanis and so on, but we are all Muslims. We need to be united and not let anything come between us.”