Congratulations to the greatest leader of Uganda, the irreplaceable Yoweri Kaguta Museveni. He has just been sworn in on his sixth term as president. I… 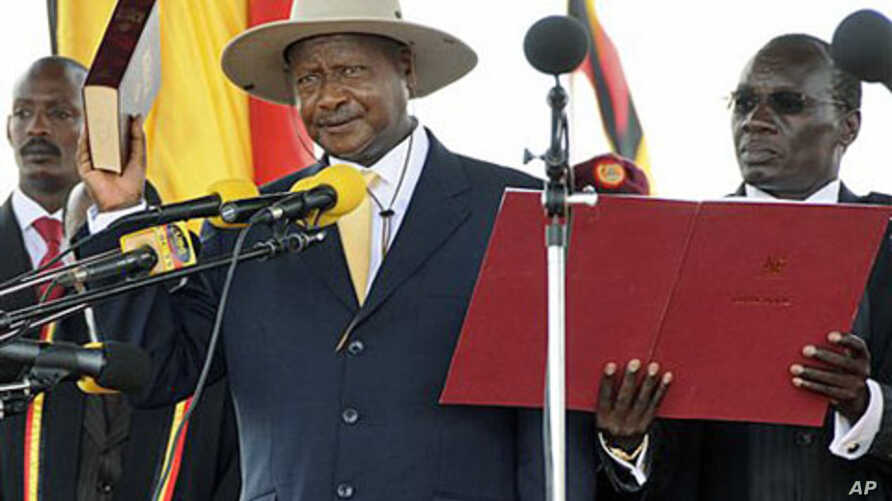 Congratulations to the greatest leader of Uganda, the irreplaceable Yoweri Kaguta Museveni. He has just been sworn in on his sixth term as president. I wouldn’t have known had President Muhammadu Buhari not sent his son, Prof Osinbajo, to represent him at the transition ceremony. Osinbajo only gets to fly the presidential jet to places where his boss does not fancy going.

As you’re reading this, Buhari is savouring the French hors d’oueuvre as a guest at the Emmanuel Macron’s Africa Finance Summit even though his self-professed expertise is in petroleum resources. He has held the title of petroleum minister since he returned to office promising to build one refinery per year. That promise has been ‘technically’ fulfilled if you ask Alhaji Lai Mohammed. In France, Buhari could be adding the finance portfolio to his star-studded title. The jury is out on which has performed better under him – the sleaze covered petroleum ministry or finance that ensures we know only what they want us to know.

In Uganda, Museveni is the best thing since the discovery of matoke. At 76 years, he has enough fuel left in the tank of governance. But in case he needs help, heir apparent Muhoozi Kainerugaba, his son, a lieutenant general and leader of the Special Forces Command, which ironically is responsible for securing the president, is always standing by.

Although Museveni needs not to worry about opposition or overthrow, he constantly sees opposition shadows that give him nightmares. His age-long opponent, Kizza Besigye, fled Kampala via Entebbe Airport over a month before the sham inauguration. Bobbi Wine the singer/parliamentarian is emasculated after several clashes with Museveni’s thugs. However, this did not stop so-called Ugandan intelligent services from announcing that they were putting Besigye under ‘preventive detention’. It’ll be a surprise if Ugandan intelligence knows that Besigye was not a candidate at the country’s last elections.

The African map is dotted with monarchical democrats. When Laurent Desire Kabila died in the Democratic Republic of Congo (DRC), his son, Joseph Kabila, was anointed in his stead. In Togo, Faure Gnassingbe inherited the throne of his father, Gnassingbe. Just weeks ago, when Idris Derby Itno died in the battlefront, in line with the Louis XIV dictum – l’etat c’est moi, forced the death of the Chadian constitution. Derby’s son, Mahamat, dissolved the parliament and declared himself the rightful successor to his father’s throne.

Africa is the last continent where this arrangement is acceptable. When it fits the dreams of the global democracy police, they look away. When the quasi-monarchical regime of Hosni Mubarak positioned his son to take over, the West made sure that ambition was thwarted. They did the same thing in Libya where they were not satisfied with taking down Muamar Gadaffi; they were bent on trying and executing his son.

Only last week, Dennis Sassou Nguesso, the 77-year-old maximum ruler of the Republic of Congo, declared a new cabinet in which his fantastically corrupt son, Denis Christel Sassou Nguesso, became the minister in charge of International Cooperation and Public Private Partnerships. Denis is under investigation by several global police agencies for fraud and embezzlement of his country’s money running into billions. The western powers that want to destroy his bad reputation know that when the ruler is the state, the state is broke and the ruler is wealthy. That is the kind of arrangement that permits a state to survive only at the generosity of the leader.

However, do not believe all you hear about African leaders. While it is true that African marijuana is among the most potent naturally, few of our leaders smoke or inhale to get high. Who needs a medicinal high when African power itself is the most potent intoxicant in the globe?

For those who read their geography rightly, Somalia is part of Africa. For years, it has been broken into pieces by lack of direction after the overthrow of a dictator. That was until Mohammed Abdullahi Mohammed, aka Faarmajo, was headhunted from exile in America to politics at home. Having endured the transition of being a refugee in Canada into transforming into a US citizen and member of the American Republican Party, you would think that Faarmajo has chewed long enough on the qat of American democracy to return home with a modified American seed of democracy capable of growing luxuriantly on Somali soil.

He founded the Tayo party; became prime minister for six months and later elevated into president for a single term that expired weeks ago. However, as the qat of power altered his perception, Faarmajo asked himself the same question that Museveni was said to have asked – why relinquish power when you can keep it without repercussions? When it was time for him to find something else to do and let someone else play the role, Faarmajo tried to convince Somali warlords that he is the best thing after xalwo and sambusa.

Somalia’s battle-inoculated warlords did not however agree. They wasted little time occupying the streets and swearing that the age-old trick would not work this time. They thwarted Farmajo’s attempt to dig in. When the upper parliament refused to back a motion for an extension of term for him, he huffed, puffed and later backed down after the so-called international community shouted hoarse forcing him to abandon his tenure extension plan.

We in Nigeria are a lucky bunch or aren’t we? Thus far, no opposition party has endorsed the candidacy of the first son as the most qualified likely successor to his dad. If they do in the future, it would not be for lack of precedent. Sai Baba still has nearly three more years to go. He has the unflinching support of Africa’s most indolent parliament right now; one that acknowledges getting its mandate to represent the people but only does as the presidency dictates. In future, if they decide to pass a confidence vote on President Buhari to continue in office, it would not be the first time we are hearing the word – tazarce or carry on!

The seeds of democracy that Africa’s former colonial overlords tried to plant here is absolutely not the type that attracts its best brains to enjoy migratory Eldorado. This seed has been genetically modified to fit nothing close to its original mother. What more, wherever it is planted in Africa, it takes on the texture of the land and has produced cancerous fruits that only those with strong immunity against its tumor survive.

Blame the perks of office of an African leader. It is so juicy that only a fool bites at its apple then tosses it. President Buhari is in charge of nearly a dozen jets he could use for both official and private functions. If Joe Biden attempts to use Air Force One that way, he’d be out of the White House in a jiffy.

An African president doesn’t even need to wipe his own behind but for decency, there’ll be serfs waiting to do it for him. Africa is yet to decide whether it wants to return to dictatorial monarchy or some other form of pseudo-democratic transmogrification. For now, everywhere you go, you see nothing but a mockery of even a scintilla of the concept of democracy. Where democrats gather, African leaders should do well to keep away.