The Katsina State Commissioner for Science and Technology, Dr Rabe Nasir, who was assassinated on Wednesday, was buried in Katsina on Friday. Nasir was murdered… 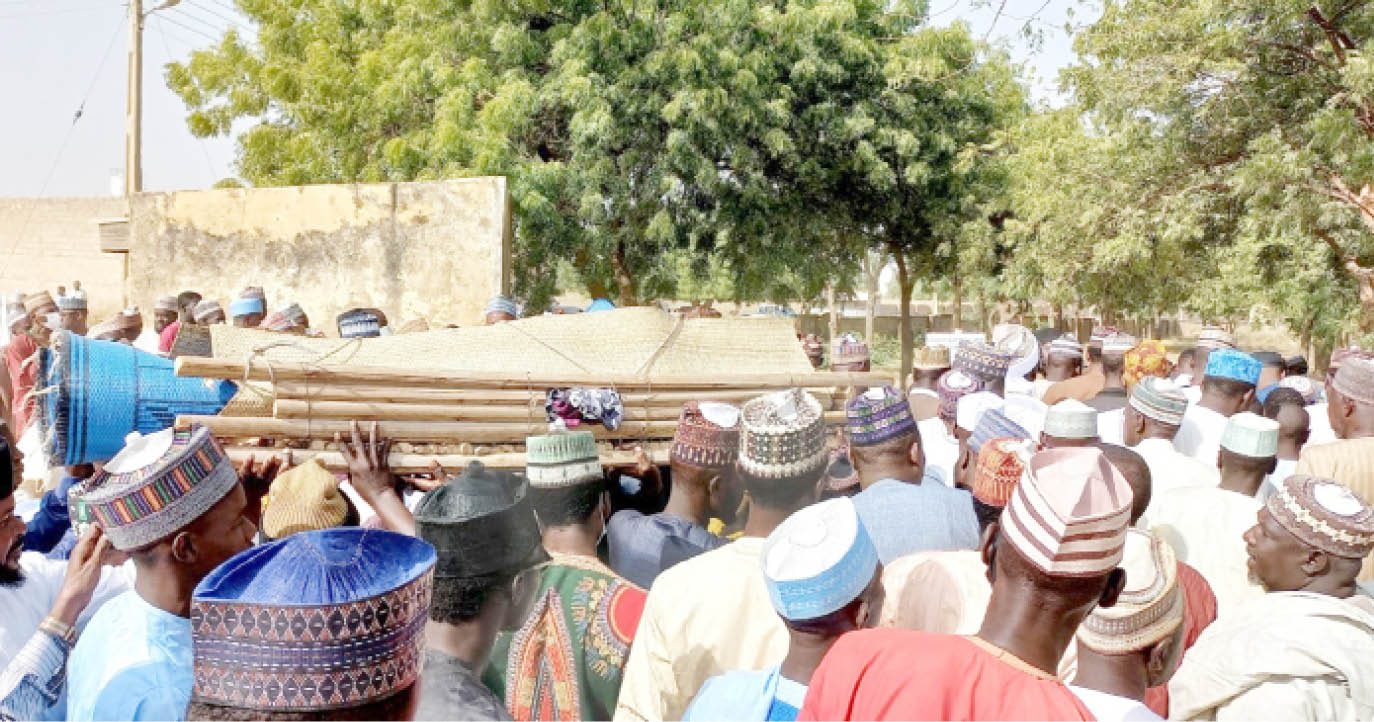 The Katsina State Commissioner for Science and Technology, Dr Rabe Nasir, who was assassinated on Wednesday, was buried in Katsina on Friday.

Nasir was murdered in his residence in Fatima Shema Estate, Katsina Metropolis by yet-to-be-identified assailants.

His body was interred at the Gidan Dawa Cemetery at 3pm after funeral prayers led by the Chief Imam of Katsina GRA Mosque, Dr Aminu Abdullahi Yammawa, immediately after Juma’at (Friday) prayers.

Special prayers were offered at the mosque for the repose of the soul of late Nasir, the security of the nation, as well as for Almighty Allah to expose whoever was behind the insecurity in the country.

Protest in Abuja, Bauchi, Kano, others

Meanwhile, there were pockets of protest in the North yesterday in frustration over the worsening insecurity.

The protesters took to the streets of Kano, the Federal Capital Territory, Bauchi, Zamfara and Sokoto singing solidarity songs and calling on authorities to put an end to the bloodshed.

Bandits had on Monday ambushed a vehicle conveying some seasonal migrants at Gidan Bawa Village in the Sabon Birni Local Government Area in Sokoto State, set it on fire and watched the passengers burn to death.

Governor Aminu Tambuwal confirmed that 23 passengers died in the fire on the spot.

In Niger, no fewer than nine persons were murdered by attackers during early morning prayers on Thursday while many others were injured.

The peaceful movement in Kano matched from Audu Bako Secretariat to Kano Government House where security operatives received them and promised to take the matter further to the appropriate quarters.

In Abuja, the protesters converged on the Unity Fountain, bearing placards with several inscriptions written in Hausa Language, chanting solidarity songs to call for local and global attention on the ongoing “genocide” in northern Nigeria.

The protesters, mostly youth, are advocating for the return of peace in the northern part of the country and at large.

Zainab Naseer Ahmad and Zahra’u Usman, who led the peaceful movement, lamented how a worsening state of insecurity was ravaging lives and threatening the livelihood of Nigerians.

“We come to share our concern and send a message to our leaders for we are tired of the worsening state of insecurity in the country.

“Every now and then lives are lost, people are being unjustly killed like animals. We demand the return of peace in our societies.

“We are saying enough is enough, no more bloodshed! Out of school children is witnessing a massive rise, orphans everywhere.

“We can’t travel in peace, economy is crumbling. People are burnt while travelling and there’s no effort from the President,” they said.

‘Increasing casualties, frequency of attacks a set back’

A security expert, Dr Kabiru Adamu, has said that increasing casualties and frequency of attacks by terrorists and other criminals is a sad pointer and a setback to Nigerian security agencies.

He disclosed this while speaking on a programme aired on Trust TV, the television arm of Media Trust, publishers of Daily Trust Newspaper and other titles yesterday.

According to him, if the performance of the Nigerian military would be measured based on clear indices, the increase in casualties and attacks is a cause for concern.

He said, “The army was saddled with the responsibilities of tackling terrorism. Now, in 2020, 10,000 people were killed as a result of attacks and activities.

“Now, the best way to measure the performance of the army in 2021 is to see that that figure is brought down to let’s say 2000.

“That is my point. I believe that in this era, the National Assembly and its committees should have key performance indicators with which to measure performance in the 27 Ministries Departments and Agencies and more importantly, the capacity.”

Gen Monguno said the delegation was sent to Katsina by the president to condole with the state government and the family of late Nasir.

He said, “The president has directed that I should lead the delegation on his behalf over the unfortunate incident that happened to a serving commissioner in the state.

“Your Excellency, what happened yesterday, the discovery of the gruesome murder of Dr Nasir, is a very great blow not only to the people of Katsina, but to the entire nation.

“A man who served diligently in various capacities to be cut short by the hands of evil and mindless people, it is something that of course has brought untold full shock and sorrow not only to his immediate family and you as the governor, but indeed to all of us.

“It has brought home the reality of our time, the security situation which we have found ourselves in.

“Of course, the nature of yesterday’s incident, the police has not concluded its investigation.

“But Mr President has the confidence that the Nigeria police will uncover those who perpetrated the dastardly act and the proper criminal justice and process of the law will take place on them.”

Gov Masari said despite the banditry challenges bedevilling the state, the way and manner Dr Nasir was murdered was totally different.

Gov masari said, “He was killed not by gun, but with a knife, none of his personal belongings was stolen. And the house was not broken.

“Like I said, what appears to an ordinary person is that whoever participated in the crime was admitted by the deceased, or somebody who has keys that give them access to him.

“But I know an investigation by security agencies would reveal what really happened. And I urge the public with any information about the incident, no matter how little it is, to inform the securities.”

While appreciating the federal government delegation, Masari said the president had called him on phone to console him over the incident, and that he explained to him what really happened.

The governor said, “It is our prayer that God in His infinite mercy will give the soul of Dr Nasir a peaceful resting place. For us as a government, we would miss him.

“A hard working, intelligent person, and above all a very trustworthy somebody. He held the truth to anything.

“He was an intelligence officer in the DSS and EFCC before he eventually joined politics where he became a House of Representatives member.

“He has served this nation in various capacities, and he has given his best for his country and for his family.

“The testimony of his mother is enough for anyone who gets such from his mother.”

Reacting to the security challenges, Sokoto State Governor, Aminu Tambuwal said it was time for the president to consider the re-enlistment of retired military personnel to join hands in tackling insecurity.

He said this when he hosted Gen. Monguno and others.

“We know the number of our personnel is very low and there’s a need for reinforcement. And the first port of call is those on the reserved list and we need to recruit more because we know our numbers in Nigeria, we are over 200 million and we are underpoliced”, he said.

He said the Sokoto State Government has been offering the needed supports to the security agencies to help tackle security challenges, saying he has given out over 500 vehicles so far.

He urged the security forces not to relent in their efforts in tackling the menace of insecurity.