Muhammed Abubakar: My dream is to be next Hausa/Fulani Super Eagles player

Young football prodigy, Muhammed Abubakar Dambuwa of ASDC academy Abuja has said his ambition is to play for the Super Eagles. In this interview with… 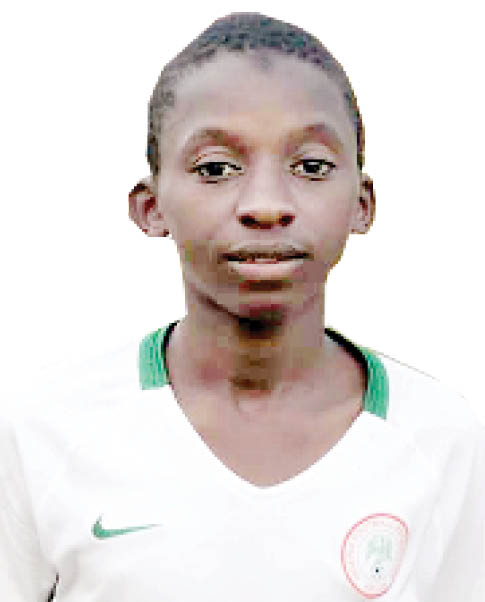 Young football prodigy, Muhammed Abubakar Dambuwa of ASDC academy Abuja has said his ambition is to play for the Super Eagles. In this interview with Trust Sports, the Sokoto state born player who is popularly called Kante by his fans spoke on how he was denied the opportunity to represent Nigeria in 2018, the inspiration he derives from Super Eagles star, Shehu Abdullahi, and his chances of playing for Kaduna United in the coming Nigeria National League (NNL) season.

What is your name and how early did you start playing football?

My name is Mohammed Abubakar Dambuwa. I am Hausa/Fulani from Dange Shuni Local Government Area of Sokoto State. I am 18 years old. I started playing football when I was in primary school. I played local matches for Dambuwa academy. Although I am so passionate about football, my parents opposed it because they wanted me to go to school. However, I persevered and now I am at the verge of becoming a professional football player. At the moment, I am with Kaduna United for the new National League season.

How did you get into Kaduna United?

I am a product of the African Sports Development Centre (ASDC) Football academy in Abuja. It is a standard academy owned by Nigerians and some foreigners. I played for them in the National Amateur League in Minna and Kaduna. It was in Kaduna that officials of Kaduna United spotted me. They sought and got approval from ASDC academy for me to join them.

You are just 18 years old. How do you fancy your chances against some of the more experienced and tested players?

Playing against bigger opponents is nothing new to me. Opponents who underrate me pay dearly. Football is more about sense than physicality. I use my football sense to outwit bigger opponents. When I arrived in Kaduna United, even my coach didn’t believe I would cope. However, the day he fielded me in a friendly match, was the day he changed his mind about me. I came on in the second half and gave two assists. We won the match 3-1. After the game, he came and hugged me and said ‘It is not good to underrate anyone’. I think he is satisfied with my performance.

How is your relationship with the senior players in the team?

It is said that respect is reciprocal. I respect them a lot and they also respect me. As a matter of fact, anytime I am not around, they miss me so much. They treat me as their younger brother and I look up to them as my elder brothers. I call them senior men and they appreciate me for doing so. Anytime I am in school, they miss me a lot.

So you are combining football with education…

Yes, I am going to school. You see there is life after football. That is what I have learnt from my academy in Abuja. I have never seen a football academy like that. They have taught us a lot of things. They prepare us for life after football. By the grace of God, in December this year, I will be a National Diploma certificate holder. I am presently a student of Sokoto State Polytechnic. This is made possible by ASDC academy Abuja.

How do you combine football with your academic pursuit?

It has not been easy but by the special grace of God, I am coping. I do my best to juggle the two. I know when to play football and when to read my books. I know that I have to make sacrifices now to be successful in the future. Very soon, I will have my ND certificate.

What is your ambition as a footballer?

My ambition is to play professional football in Europe and to represent the Super Eagles of Nigeria. It is not going to be easy but I have the ability to play at the top level. I only need to work harder.

Have you played for any of the junior national teams?

I came so close to that, I think in 2017 but it ended in tears for me. It was the biggest disappointment of my life. I was selected among the 18 players that were to represent Nigeria at the Africa Youth Games in Morocco. We travelled from Abuja to Lagos. On the eve of departure, I was told that my visa didn’t come out. That was how they dropped me from the team. It was a rude shock to me. I wept bitterly. I still don’t believe what I was told.

How were you able to overcome that setback?

What does it mean to you to have a mentor like Shehu Abdullahi?

It means so much to me. He is our hero in Sokoto State. He inspires us so much with what he has achieved so far. He is so nice and humble that anytime he comes home, he plays with us. There is no inspiration greater than that for the young ones. With his support, we are going to have more Hausa/Fulanis in the national team.

Why are you called Kante?

(Laughs) My fans in Karu-Site in Abuja named me Kante after the Chelsea star, N’Golo Kante. They said I play like him. You know I play as an attacking midfielder and I mark a lot. Secondly, we have the same skin colour and physique. Funny enough, Kante is not my idol. However, I don’t have any problem with the name because it is a thing of honour to be associated with such a big player. Who wouldn’t want to be like N’Golo Kante?

So who is your idol?

My idol is the former Barcelona player, Andres Iniesta. I like the way he plays. I try to play like him. He is also an attacking midfielder so I learn a lot from him.

What is your dream club in Europe?

My dream is to play for Manchester City. I like the way they press opponents. They call it high pressing football. They also play entertaining football which is made possible by quick movement of the players and the ball. Anytime I watch them play, I feel I am among them.

Who is your favourite player?

It may surprise you to know that it is Usman Mohammed. He is one of the most talented Nigerian players. It surprises me that after his performance in the friendly with Atletico Madrid in 2018, he is not playing for the Super Eagles. I believe he will get his chance one day.